A mechanical seal is used to contain a fluid within a pump where a rotating shaft passes through the housing. Many are used in a wide variety of applications all over the world.

Technical papers have been written about the various and sundry technologies and applications. But leaks continue to be the bane of anyone who needs to move fluid in their operations.

Regardless of manufacturer, size and material of construction, the fundamental basics of the seal function remain constant. The heart of a seal is a combination of highly polished faces, one rotating and one stationary, that run in close semi-contact to each other.

Damage to these faces causes seal leakage. Other leaks are caused by running dry, inadequate lubrication, misapplied equipment, operational issues and personnel issues. There are typically one or two of those “bad actors” where conventional sealing technology simply does not work well, where the seal-life expectancy is low and the cost for maintenance is high. 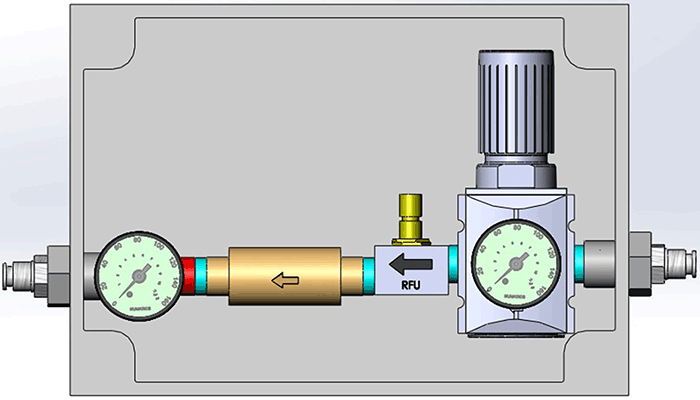 There is a leak prevention systems (LPS) seal technology that, while not perfect for every pumping application, is a solution for those nagging bad actors. It is an advanced, patented, air-powered LPS seal technology. It works in pumps but also can be applied in other types of equipment such as mixers and blenders (both liquid and powder).

The main feature of this technology is that the pumping process fluid is not in contact with the sealing surfaces and is not expected to lubricate the seal internally as is the case in most conventional mechanical seal systems. This design allows the system to actually run dry, to work in highly abrasive slurries and withstand gross axial and redial misalignment.

This technology uses a static field of injectable sealant and a separate air flush internally to the seal. The injectable sealant fills the internal cavity of the seal, and a patented constant air-powered booster is used to maintain a continuative compression on the sealant. The LPS is maintained 24/7 where a reserve stock of sealant is located to feed the internal seal. Small losses of sealant occur, and the booster with an indicator rod will feed new sealant. Losses are minimal, and not internal to the process fluid, which makes this system applicable to food grade services. Replacement of sealant in the feed tube is easily accomplished while the pump is running. 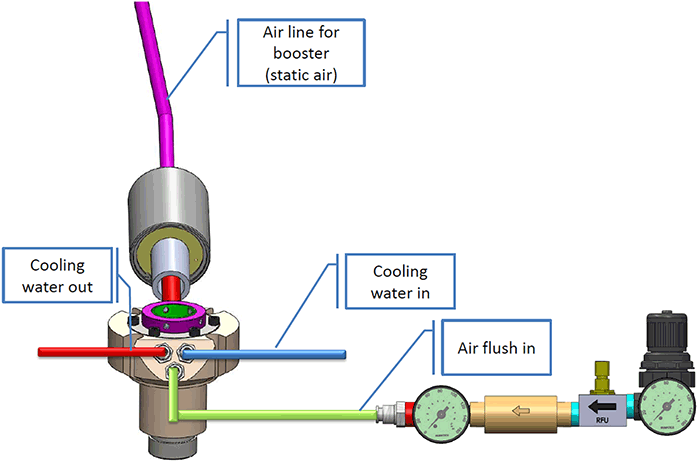 Image 2. How air is set up to seal and booster.

The air flush feature uses a small amount of compressed air—about 0.17 standard cubic feet per minute (scfm) at 8 pounds per square inch gauge (psig) for a 2-inch pump shaft—or nitrogen, which is injected into the seal to form an air bubble between the back of the seal (bottom of seal chamber) and the back side of the impeller. The air injection pressure is typically one bar—14.7 pounds per square inch (psi)—above seal chamber pressure. In some cases of high solids, a higher margin may be required due to the weight of the process fluid. The process fluid cannot get past the air bubble to leak to the atmosphere. The pressurized flexible sealant maintains the air bubble but also acts as a constant available backup if the pump is shut down or the air is turned off.

In essence, the complete LPS arrangement acts to maintain the air flush at the required pressure with minimum air consumption. When the air bubble is generated within the seal, there is a complete phase separation between the seal and process fluid. There is no contact between the process and the sealing components. By this, the seal is constantly sealing so it can withstand dry-run, closed suction and other upsets that would damage conventional mechanical seals permanently. The sealant will maintain seal ability for a short period if air is lost, or in some instances deadheading overcomes the air flush pressure. 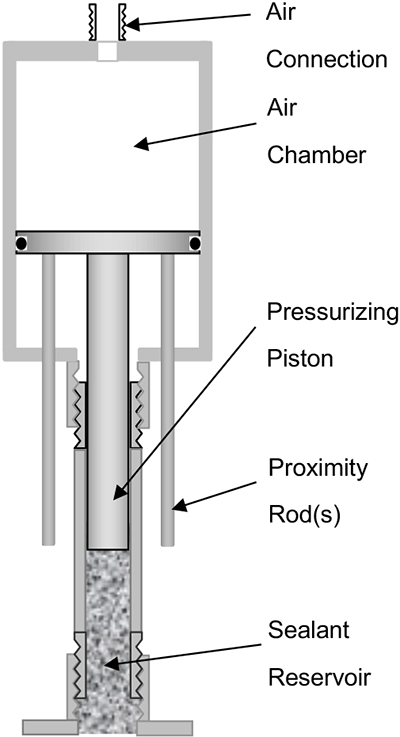 The LPS seal does require external cooling of the sealant in pump applications due to the frictional heat generated by typical pump speeds (not generally required in mixer and slower speed units). This cooling is accomplished through an internal cooling jacket in the LPS seal. Cooling liquid does not come in contact with the process fluid.

The entire air system for the LPS seal is maintained through an air control panel supplied with each seal. It would be similar in function as a barrier fluid support system for an API Plan 53 and double seal but using 100 percent air versus a barrier fluid and air pressure. It would be more similar to an API Plan 74 found on double gas seals. Each panel has a pressure regulator and needle valve that allows the user to adjust the required pressure and flow rate for the specific characteristics of the application. The booster does not consume air, only the air flush, which will be set based on box pressure and process fluid conditions. 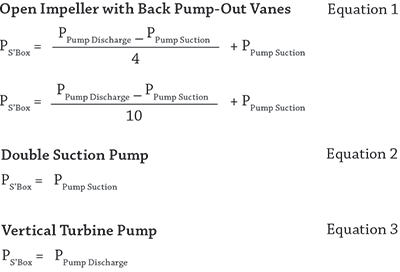 Since it is important that the pressure on the flexible sealant is maintained slightly above pump stuffing box pressure, the calculation for stuffing box pressure must be considered. This is different for various types of pumps. Examples are Equations 1, 2 and 3, where “P” represents pressure.

Since each pump and process has different properties, and every seal is adapted easily to the specific characteristics, a control panel is supplied with each seal. This control panel, which has a pressure regulator and a needle valve, allows the user to adjust the required pressure and flow rate in order to form the bubble.

This means the total control of the seal, sealant pressure and air pressure is in the hands of the user, who has “volume buttons” for preferred adjustments.

The first generation of the LPS is an active autonomic sealant chamber assembly. In the basic LPS arrangement, the pressure on the flexible sealant within the seal assembly is maintained at about 1 bar (approximately 15 psig) above stuffing box pressure.

Opposed to conventional compression sealing methods (compression packing, manual sealant injection, etc.), a patented booster design acts like an online continuative compression source. By using the pressure booster, the LPS is actually maintained 24/7, where a stock of sealant is to be replaced roughly every six months. The booster arrangement is given in Image 2.

A food processing plant brought raw bulk liquid material into their plant from outside holding tanks. There it was fed into two ANSI 3196MTX pumps, which fed the liquid first through five micron filters to remove solids and then into large cooking vessels.

The pumps used double mechanical seals with a plan 53A, pressurized tank with FDA synthetic oil for the barrier fluid liquid. The problem was constant and apparent: cavitation occurred regularly and seal failure was constant. This application was very sensitive, which made it difficult to properly size the right feed lines and achieve good net positive suction head (NPSH). Also, a filter in the discharge line made the application even more complex, causing clogging that dead-headed the pump.

Something needed to be done fast, and that is where the LPS came in. It could dry-run and was not affected by cavitation, and in the event of a dead-head condition, there would be small leaks but they could immediately be corrected without interrupting the pumps’ operation.

The result was immediate with zero leakage and zero waste with improved safety and uptime. The pump applications where the LPS system was installed were running leak free.

Another pump user manufactures a silicon powder material in a reactor at 400 F where the material needs to be processed with a top entry mixer. The leaking problems were immediate with constant failures of the double liquid mechanical seal that was incorporated into the system. The material itself was abrasive and there was constant run-out at the bottom of the mixer shaft. In addition, the barrier fluid leaked back into the tank causing steady contamination to the process.

This situation called for a dramatic re-thinking of how to improve the sealing in this application, reducing and eliminating leaks. The operators felt modifications to the existing face type seal was required, but a different approach was strongly urged.

The answer was installing the air-powered LPS seal technology along with a nitrogen control panel that allowed the operators to run product problem-free for the first time in their reactor. In addition, where before the customer needed cooling water to lubricate and cool the double seal and seal failure caused contamination internally to the silica powder, the LPS with its internal cooling chamber was able to dissipate the heat and also eliminate water from crossing over into the vessel. The system has been operating continually without issues.

George Gregorowicz is seal division manager at Pumping Solutions, Inc. He has been with the company since 2009. For more information, visit pump96.com.