Members of the Submersible Wastewater Pump Association (SWPA) enjoyed a fantastic view from their block of rooms at New York's Millennium Hilton. A glance from the window provided a sweeping look of the National 9/11 Memorial & Museum, 1 World Trade Center and the lower Manhattan skyline.

SWPA visited in mid-July for its summer meetings, to see the memorial and museum, and talk about the pumps that make the beautiful facilities possible. Jules Leibman, G.A. Fleet & Associates, led a group of 20 through the museum and then discussed his involvement with the site since 1966. Leibman's company provided the pumps in the original twin towers and in all the buildings now on the site, as well as for the waterfalls that comprise the memorial. 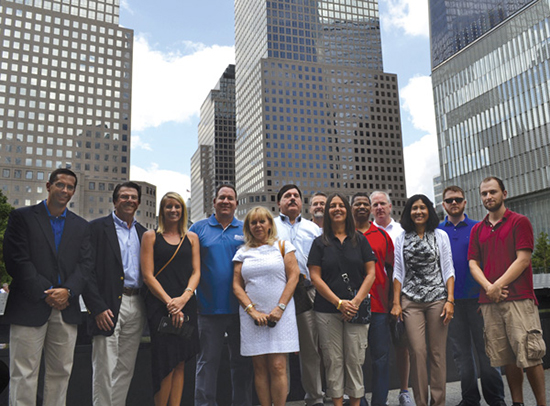 In addition to the memorial tour, the group enjoyed a boat ride up the Hudson and East rivers to see the Statue of Liberty, the United Nations, Ellis Island and other historic sites along the way. SWPA members also held their annual summer meeting, led by Adam Stolberg, SWPA executive director, and Carol Stolberg, SWPA administrative director. SWPA President Barry Jongsma, Pentair, was on hand to lead and participate in discussions.

Groups that met to discuss activities for the remaining half of 2014 and 2015 included the project and plans, marketing, and technical committees. SWPA committee members agreed to extend the group’s successful webinar series with Pumps & Systems into 2015. Also discussed was the changing submersible pump industry, including return on investment, responsiveness, consolidations and mergers, globalization, and image building.

Read our exclusive coverage of the National 9/11 Memorial fountains, or look through our slideshow.