What are the Characteristics of a Centrifugal Pump? Head, performance curve and affinity laws all contribute to the efficiency of centrifugal pumps.
by Sharon James, Rockwell Automation
09/01/2012 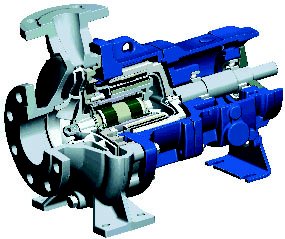 Creating a resistance to the flow controls the kinetic energy of a liquid coming out of an impeller. The first resistance is created by the pump volute (casing), which catches the liquid and slows it down. When the liquid slows down in the pump casing, some of the kinetic energy is converted to pressure energy. It is the resistance to the pump’s flow that is read on a pressure gauge attached to the discharge line. A pump does not create pressure, it only creates flow. Pressure is a measurement of the resistance to flow. 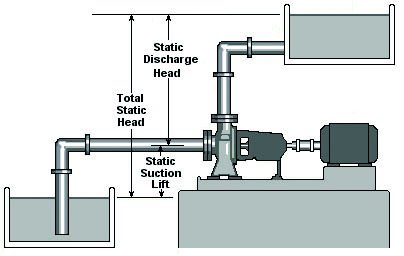 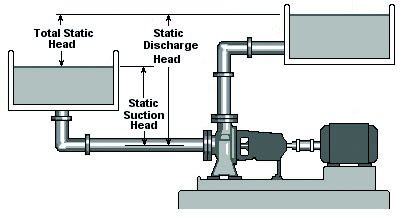 In Newtonian (true) fluids (non-viscous liquids, such as water or gasoline), the term head is the measurement of the kinetic energy that a centrifugal pump creates. Imagine a pipe shooting a jet of water straight into the air. The height that the water reaches is the head. Head measures the height of a liquid column, which the pump could create resulting from the kinetic energy the centrifugal pump gives to the liquid. The main reason for using head instead of pressure to measure a centrifugal pump’s energy is that the pressure from a pump will change if the specific gravity (weight) of the liquid changes, but the head will not change. End users can always describe a pump’s performance on any Newtonian fluid, whether it is heavy (sulfuric acid) or light (gasoline), by using head. Head is related to the velocity that the liquid gains when going through the pump.

All the forms of energy involved in a liquid flow system can be expressed in terms of feet of liquid. The total of these heads determines the total system head or the work that a pump must perform in the system. The different types of head—friction, velocity and pressure—are defined in this section.

Friction head is the head required to overcome the resistance to flow in the pipe and fittings. It depends on the size, condition and type of pipe; the number and type of pipe fittings; flow rate; and nature of the liquid.

Velocity head is the energy of a liquid as a result of its motion at some velocity (V). It is the equivalent head in feet through which the water would have to fall to acquire the same velocity or, in other words, the head necessary to accelerate the water. Velocity head can be calculated using the following formula:

The velocity head is usually insignificant and can be ignored in most high-head systems. However, it can be a large factor and must be considered in low-head systems.

Pressure Head
Pressure head must be considered when a pumping system either begins from or empties into a tank that is under some pressure other than atmospheric. The pressure in such a tank must first be converted to feet of liquid. A vacuum in the suction tank or a positive pressure in the discharge tank must be added to the system head, whereas a positive pressure in the suction tank or vacuum in the discharge tank would be subtracted. The following is a formula for converting inches of mercury vacuum into feet of liquid:

The different types of head are combined to make up the total system head at any particular flow rate. The descriptions in this section are of these combined or dynamic heads, as they apply to the centrifugal pump.

Static discharge head is the vertical distance in feet between the pump centerline and the point of free discharge or the surface of the liquid in the discharge tank.

Total static head is the vertical distance in feet between the free level of the source of supply and the point of free discharge or the free surface of the discharge liquid.

Pump characteristics—such as flow, pressure, efficiency and brake horsepower—are shown graphically on a pump curve. The first item to look at is the size of the pump. The size of the pump, 2x3-8 is shown in the upper section of the graph. The numbers 2x3-8 indicates:

Some companies may have the number shown as 3x2-8. The larger of the first two numbers is the inlet. Pump speed (rpm) is also shown in the upper section of the graph and indicates performance at a speed of 3,560 rpm. All the information is representative of this operational speed.

Capacity or flow is shown along the bottom of the curve. The flow levels are shown for the operating speed of 3,560 rpm but indicate the effect of head as the outlet is throttled.

The left side of the performance curve shows the head (feet) generated at the different flow rates. Multiple flow versus head curves are present on the graph (see Figure 3). Each one represents a different (trimmed) impeller size. For this pump, the range of impellers is 5.5 inches to 8.375 inches. 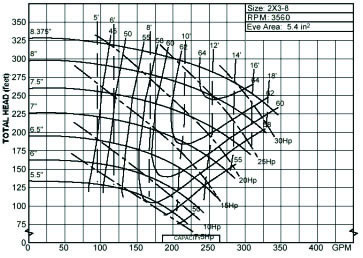 Efficiency curves are overlaid on the graph (vertical lines) and indicate from 64 to 45 percent efficiency for this pump. As head is increased, flow and efficiency decrease.

Brake horsepower is shown with the dashed lines drawn diagonally from upper left to lower right. BHP curves are shown for 7.5 to 30 horsepower. Using the 8-inch impeller with a flow of 250 gpm, the BHP is approximately 25 horsepower.

Pump and System Curves
The pump curve is solely a function of the physical characteristics of the pump. The system curve is completely dependent on the size of pipe, the length of pipe, the number and location of elbows, and other factors. Where these two curves intersect is the natural operating point (see Figure 4). This is where the pump pressure matches the system losses and everything is balanced. 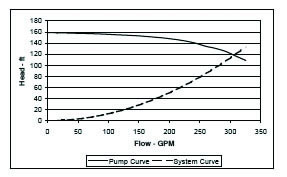 If the system is part of a process that changes often or continuously, then some method of altering the pump characteristics or the system parameters is necessary. Two methods can accomplish the continuously varying flow objective. One method is throttling, which changes the system curve by use of a control or throttling valve. The other method is to vary the speed of the pump, which modifies the pump curve.

Throttling System
With the throttling method, obstructing the flow increases the head pressure. A system with two different valve settings is shown in Figure 6. 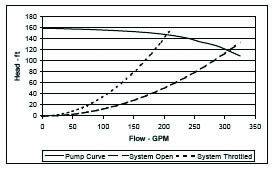 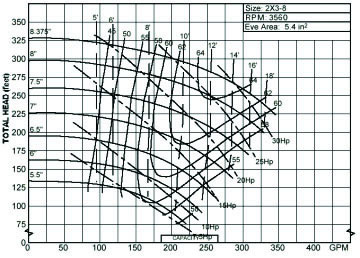 For comparison, let’s use an example to determine the power requirements for the throttling system, then the variable speed system. A pump (with an 8-inch impeller) operating at a base speed of 3,560 rpm is used. This pump is to operate a system requiring a 250-foot head at 250 gpm (see Figure 6).

From the information shown, the horsepower requirements at the throttling system flow rates are shown in Table 1.

Variable Speed System
In comparison, the variable speed method takes advantage of the change in pump characteristics that occur when the impeller speed is changed (see Figure 7). The lower pump speed changes the pump curve based on the head generated by the velocity of the fluid being pumped. Remember that the head is equal to V2/2g. 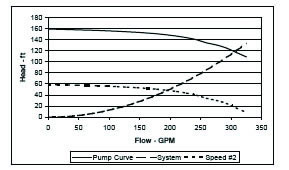 Affinity Laws
A set of formulas that is used to predict the operation of a centrifugal pump at any operating point based on the original pump characteristics is known as the affinity laws.

Using the same pump example as the throttling system, power requirements are calculated for the system for different
speeds (see Table 2).

Use the affinity laws to calculate the values for the remainder of the operating points. Obviously, varying the speed requires much less power. To determine the actual power required, the efficiency of the drive should be factored in. The energy savings will depend on the amount of time the pump is operated at each reduced speed point.

Using the figures in Table 2, a flow of 200 gpm when throttled takes 22.5 horsepower. With variable speed only 12.8 horsepower is required. If the flow is required for 2,000 hours per year at 7 cents per kilowatt hour, the cost comparison is:

This article illustrates how centrifugal pumps’ inherent nature of operation makes them prime candidates for energy savings. Most pump systems are designed and oversized for worst-case loading conditions. Following the principle of the affinity laws, just by lowering the flow of an oversized centrifugal pump by 20 percent can reduce power consumption by about 50 percent, resulting in dramatic energy savings.

Sharon James received his M.S. in electrical engineering from Marquette University, Milwaukee, Wis. He currently works in a product management function for Rockwell Automation in Mequon, Wis. James can be reached at sjames@ra.rockwell.com.