The idea for DLWC dates back to 1982 when the Canada Mortgage and Housing Corporation first presented the results of a study describing “the concept of pumping water from the bed of Lake Ontario through a hydraulic heat transfer system to cool major downtown buildings.”

In 1987, the chilled water plant was first opened in the south building of the Metro Toronto Convention Centre. In 1992, the design of Phase II of the DLWC system was finalized, with plans to extend the chilled water distribution system farther north to serve a larger section of the downtown core.

How the System Works

In winter, the surface of Lake Ontario cools to approximately 4 C (39 F). At this temperature, the density of the water increases, which causes it to sink. In summer, the surface water heats up but remains at the surface because it is warm and not dense enough to sink.1 No matter how high the temperature rises in the summer, the deeper lake water remains very cold. Over time, this phenomenon has created a reservoir of water at the bottom of the lake that always remains cold. 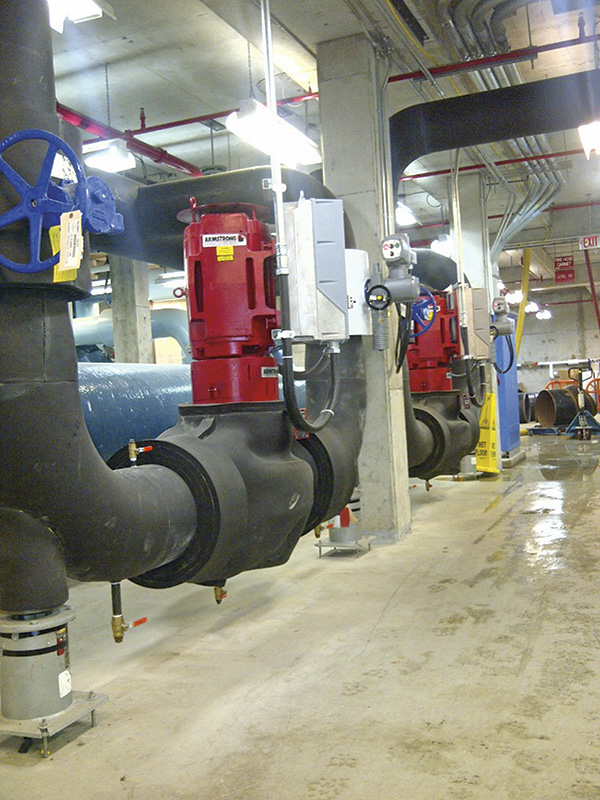 The DLWC system draws cold water into three 5-kilometer long intake pipes from a depth of 83 meters (272 feet). Through a heat transfer process at Toronto’s John Street Pumping Station, warm water from the air conditioning systems of major buildings in Toronto’s downtown core is cooled by the lake water and cycled back again. Once the energy transfer process is complete, the lake water feeds into the city’s potable water system. Only the temperature of the lake water is harnessed, rather than the water itself, which means that the system does not pollute the lake with a plume of waste heat.

To meet the specific flow and head requirements of the project, the pump manufacturer for the project designed a new size of vertical in-line pump (VIL). Because the DLWC concept was new at the time, design engineers could not foresee the actual operating conditions of the pumps. It later became apparent that the system flow requirement was forcing the pumps to operate at a duty point that was substantially different from the originally specified performance curve.

Responding to the customer’s request, the manufacturer redesigned the pump impellers for higher pressure, lower flow operation. The redesigned 16 x 16 x 15 VIL pumps with 350-horsepower motors provided a high flow rate (10,000 gallons per minute) at low head (86 feet). With that correction in place, the pumps have operated flawlessly since 1992 with few maintenance requirements.

Strategic collaboration with Toronto has enabled the city’s downtown core to embrace DLWC as an alternative to conventional, energy-intensive air conditioning.

Recently, the cooling facility was upgraded to include a new 8,000-ton cooling plant. The organization needed to complete the project quickly. That, among other factors, led to a decision to use VIL pumps with integrated controllers and design envelope technology, which includes a pre-set performance curve and control algorithms that automatically adjust motor speed so the pumps operate at their most efficient levels. Project managers chose a pump manufacturer that would test the pumps thoroughly—including the integrated controllers—before delivery, knowing that this factory testing would condense the schedule for delivery and installation.

Using intelligent variable speed control instead of constant speed allowed designers to avoid the inclusion of balancing valves and allowed operators to control the flow through digital means rather than mechanical. This also made commissioning the new system easy, so that the entire balancing process took only one hour.

A number of factors contributed to the decision to install VIL pumps. From a mechanical standpoint, project managers and contractors appreciated the fact that VIL pumps use a balanced impeller and include no thrust bearings. This makes the pump much easier to work with because it has no flexible coupling and no issues with alignment at the installation stage or throughout its operating life.

The installation of the design envelope VIL pumps was plug and play. Contractors were brought onsite to connect the power to the controllers. Integration with the existing building management system using the BACnet protocol was completed easily.

The entire installation process required fewer trades onsite, and the system operators appreciated the single point of responsibility that accompanies an integrated pumping solution, rather than a controller and pumps from separate vendors. The instant feedback available through the integrated controller allowed the operators to find the best operating points easily, so that the pumps may be staged on or off at appropriate load levels.

In approximately 10 months of operation since the new pumps were installed, no major issues have arisen, and the operators are extremely pleased with the pump efficiency levels and the energy savings derived from using the design envelope technology.

The design envelope technology that is the foundation of these integrated pumps allows operators to dial back the pump speed to only 5 psi per pump during the winter months, when demand for cooling is much lower.

This means that the 600-horsepower motors operate at only 70 horsepower, saving the organization a tremendous amount of energy and related costs. In addition, as the load changes throughout the year and as different operators are tasked with managing the mechanical room, staff members spend less time adjusting and rebalancing the system. With established operating parameters documented and stored in the integrated controllers, any required adjustments can be made easily. 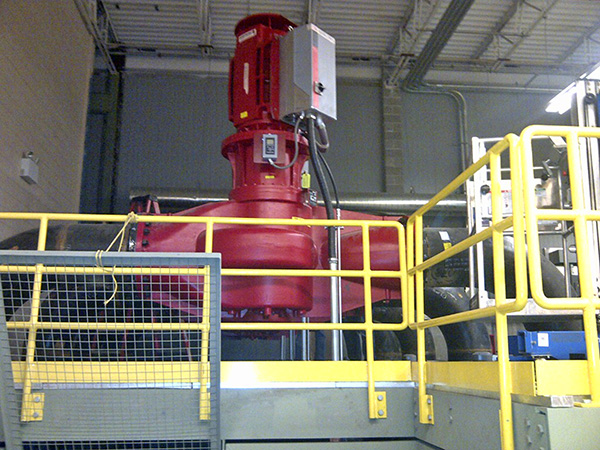 This image shows a design envelope VIL pump with integrated controller. VIL pumps are typically mounted in the piping and do not require a concrete base.

The DLWC system provides a unique, sustainable alternative to conventional air conditioning and has become an example of efficient, renewable cooling around the world.

The system reduces electrical demand by more than 61 megawatts—the equivalent power demand of 6,800 homes. This reduction in demand for electricity has proven very important to the viability of the downtown core, as it relieves the pressure on an over-burdened electrical grid. The DLWC system also offers benefits that make it attractive to building owners.

Because Lake Ontario serves as the source of cooling, DLWC eliminates the need for electrically-powered chillers at customers’ buildings. This saves thousands of dollars in capital investments, reduces the floor space required for equipment and reduces maintenance costs.

Some of the other benefits to the city and the environment include:2

The DLWC system has been recognized for design innovation and environmental stewardship with several high-profile awards.

In 2006, the organization received the Leonardo da Vinci award for creativity and innovation in business.

In 2011, the current industry association, the International District Energy Association, recognized the installation as the System of the Year for the second time. The organization stated that reliability, operating efficiency, customer satisfaction and community participation were key factors in the decision.

As the DLWC facility continues to serve customers and evolve and expand its customer base, design envelope technology will continue to support its operations. It will enable future expansion with industry-leading solutions.

Facilities Linked to the DLWC

Downtown Toronto facilities currently linked to the DLWC system include:

Brent Ross is director of Configured Building Equipment with Armstrong Fluid Technology. He may be reached at 416-755-2291. For more information, visit www.armstrongfluidtechnology.com.