Q. We are frequently replacing the ball bearings in an end suction pump that is pumping hot oil at 700 deg F. Someone has suggested that the bearings should be replaced with C3 fit bearings. What is C3 fit, and how will it improve bearing life?

A. Ball bearings are made with different amounts of internal clearance between the raceways and the balls. Most bearings have little clearance between the raceways and the balls to accurately align the rotating shaft to the stationary members and prevent any looseness or play in the shaft. However, when a pump is operating using hot liquids, the shaft and inner raceway of the bearing will expand, closing any clearance, and can impose an additional load or squeeze on the bearings. This can be further aggravated if the bearing housing is cooled with a water jacket.

C3 fit bearings are made with greater internal clearance, which allows for the expansion of the inner raceway and avoids the excessive load on the bearing. Bearings with even greater clearance designated as C4 and C5 are also available if C3 is not sufficient.

Check with your pump manufacturer before replacing any bearings with bearings manufactured with an internal fit different than the fit originally supplied.

Q. What causes suction recirculation in pumps? How damaging is it, and what can be done to avoid this condition?

A. Suction recirculation in centrifugal pumps occurs when the flow through the pump is lower than that for which the impeller was designed. When this happens, a portion of the flow is forced back to the impeller inlet (suction) as shown in Figure 5-12. 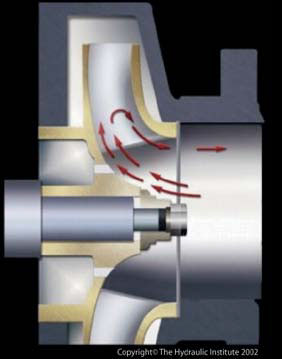 This recirculation of flow creates a vortex on the impeller blades resulting in low-pressure regions and allows vapor bubbles to form and collapse causing cavitation damage to the impeller vanes. Vibration also results and leads to mechanical damage to the bearings and seals.

This condition usually begins below 70 to 50 percent of the best efficiency (BEP) rate of flow. One solution is to provide a bypass line from the discharge to the suction piping, which can be sized to allow sufficient flow for the pump to operate at a rate of flow close to the BEP.

A temporary approach to minimize the problem is to add an orifice (some times called a bulkhead ring) at the impeller inlet. The opening in the orifice should be sufficient to allow approximately 70 percent of the BEP flow, but this modification must be coordinated with the pump manufacturer.

When suction recirculation is responsible for significantly reduced service life, excessive downtime and lost production, an energy efficient solution is to use an impeller appropriate for the actual flow, based on the system requirements. If the system requirements vary significantly, the addition of a speed control device may be justified. For a more complete explanation, see Optimizing Pumping Systems: A-Guide-to-Improved-Efficiency-Reliability-and-Profitability, available at http://estore.pumps.org/.

Q. What is the difference between a Newtonian and non-Newtonian fluid?

A. A fluid is Newtonian when the ratio of shear stress to shear rate is a constant for all shear rates, is independent of time, and zero shear rate exists only at zero shear stress. Most mineral oils at temperatures above the cloud point (the temperature at which the oil begins to appear cloudy), solvents and water approximate this condition and are considered Newtonian fluids. The viscosity of these fluids is independent of rate of shear.

A non-Newtonian fluid will change viscosity with changes in the rate of shear applied to the fluid and/or the length of time at shear.

Several types of non-Newtonian fluids are defined below. When the ratio of shear stress to shear rate increases as shear rate increases, reversibly and independent of time, a fluid is said to be dilatant. Highly concentrated pigment-vehicle suspensions, such as paints, printing inks, and some starches, are dilatants fluids. The apparent viscosity of these fluids increases as the rate of shear increases. Some dilatant fluids solidify at high rates of shear. Pumping such fluids requires low velocity through the pump.

When the shear stress to shear rate ratio is constant for shear rates above zero, it is independent of time, but when shear occurs only for shear stress above a fixed minimum greater than zero, a fluid is termed plastic. A plastic fluid, such as putty or molding clay, is characterized by a yield point. This means that a definite minimum stress or force must be applied to the fluid before any flow takes place.

A fluid is thixotropic when the ratio of shear stress to shear rate decreases and is time-dependent in that this ratio increases back to its “rest” value gradually with lapse of time at zero shear rate and stress, and decreases to a limit value gradually with lapse of time at constant shear rate. Most greases, drilling mud, gels, and quicksand are thixotropic fluids when the apparent viscosity of these materials decreases for an increasing rate of shear and for an increasing length of time at shear.

When the ratio of shear stress to shear rate is constant for all shear rates at any given instant of time, but increases with time, a fluid is rheopectic. Some greases are intentionally manufactured to have partial rheopectic properties that facilitate pumping in a stable condition. However, upon shearing in a bearing, the grease builds up to a higher apparent viscosity.

Additional information about fluids and the effect of viscosity on pump and system performance may be found in ANSI/HI 3.1-3.5 American National Standard for Rotary Pumps for Nomenclature, Definitions, Application, and Operation, which is available at http://estore.pumps.org/.