Energy is the driving force behind global manufacturing today, and demand has increased exponentially with each generation. The global modern economy depends on its accessibility and, even more so, on its affordability.

This energy demand has generated an important discussion in the pump industry, and it begins with the increased cost of energy during the last decade. The Bureau of Labor Statistics reported that the average consumer pays 47 percent more for electricity than they did 10 years ago. While many producers and consumers are aware of this fact, many accept it as part of the cost of doing business. The desire to decrease the end users’ cost of doing business motivated a diaphragm pump manufacturer’s team to develop a new line of pumps to meet this energy problem head-on.

Energy comes in many forms—liquid fuel, hydraulic, electrical and pneumatic. This article focuses on compressed air, which powers air-operated double diaphragm pumps (AODDP). AODDPs are used in many applications but are most commonly used in the transfer of fluid from one location to another. A basic assumption is a standard price for electricity of $0.07 per kilowatt hour (kWh). Another assumption is that a 1-horsepower (hp) air compressor yields, on average, 4 standard cubic feet per minute (SCFM) of compressed air.

To progress further into a discussion on the operating costs associated with compressed air usage in AODDPs, the proper way to read an AODDP pump curve must be understood. For a given operating condition, a pump curve conveys two important pieces of information: 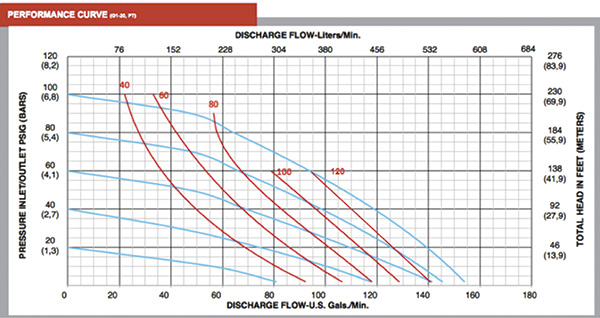 Figure 1. An illustration of a performance curve for a typical 2-inch AODDP

To read the pump curve in Figure 2, begin at the right of the vertical axis. Trace the curved blue 80 psig air inlet line until it intersects with the 20 psig horizontal line. The operating point of the pump is at this intersection—125 gpm at a rate of 118 SCFM. Using this information, a cost for operating the pump during a standard 8-hour day can be determined using the previously agreed upon standard air compressor yield and cost of electricity. 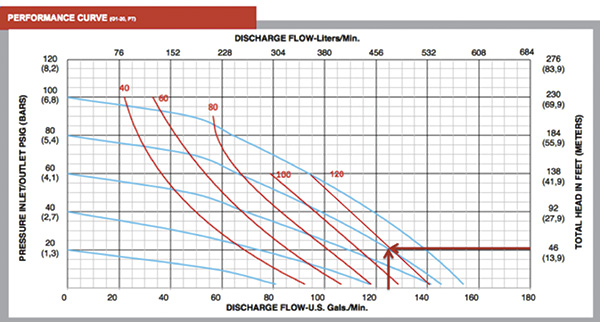 Figure 2. A pump curve reading at 80 psi at the air inlet and 20 psi of liquid discharge pressure

Based on these calculations and the assumed operating conditions, the pump costs $1.54 per hour of operation; $12.32 per day; $61.60 per five-day work week; and $3,203 per year. This average operating cost can easily be more than the initial purchase price of the AODDP. An installation rarely has only one AODDP—many installations can have up to 100 pumps. At $3,203 each in annual operating costs, the pumps’ impact on the cost of doing business is significant. 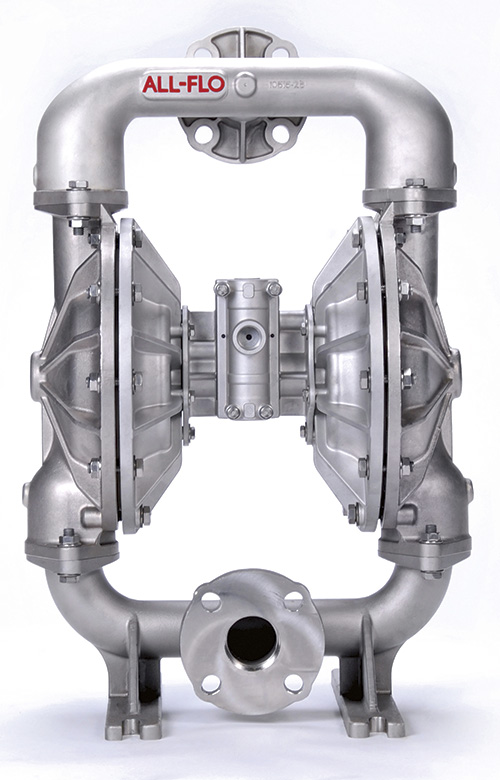 Recognizing the impact of the rising cost of energy on the cost of operating a standard AODDP, the pump manufacturer developed a line of pumps that would significantly reduce the end user’s cost of operation. This pump improves overall performance (with increased suction lift and flow rate) and uses less than half the compressed air of previous models.

Multiple modifications were made to its original design, including:

Starting with a popular 26-year-old design, the AODDP manufacturer modified the shift point of its air valve, which resulted in a substantial improvement in overall energy consumption. On the earlier design, the pump was significantly less efficient near the end of the diaphragm stroke than it was at the beginning. Near the end of the stroke, the pump continued to consume large amounts of air but displaced progressively less fluid. By shifting the pump earlier in the cycle, the pump displaced slightly less fluid but used substantially less air. This yielded a dramatic improvement in overall air efficiency.

The optimized dead space on the liquid side of the diaphragm resulted in higher suction lift and higher displacement per stroke and yielded improved suction lift and a higher flow rate, respectively. Suction lift on the new design was increased from 13 feet-water to 24 feet-water, and the flow rate was improved from 155 gpm to 190 gpm.

The redesign resulted in a pump with dramatically improved energy characteristics (see Figure 3). In Figure 3, the new design is compared to the average AODDP from Figure 2. 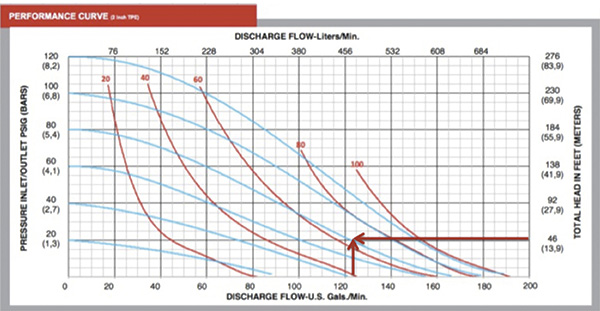 Starting at the same point (the intersection of the 80 psi inlet and 20 psi discharge), the curve shows the operating point of the redesigned pump—125 gpm at a cost of 65 SCFM. The cost of operating the 2-inch redesigned pump during a standard 8-hour day can be:

The redesigned pump costs its owner $0.85 per hour of operation; $6.78 per day; $3.94 per five-day work week; and $1,765 per year. When compared to the earlier calculations seen in Figure 2, $3,203 annually, the potential exists for dramatically improving the cost of doing business for the end user, especially an end user who operates up to 100 pumps. In this hypothetical scenario, the end user would save about $140,000 annually.

The energy cost of several AODDPs will be analyzed from a different perspective. Instead of deciding to operate the pump at a certain air pressure, consider an application in which the pump must transfer 8,000 gallons of liquid every hour, 8 hours per day for an entire year. In this application, a basic transfer application with a liquid discharge pressure of 20 psi will be assumed.
In this example, 8,000 gallons per hour is equivalent to a flow rate of 133 gpm (8,000 gallons/hour/60 minutes). The pump operates at 133 gpm against a discharge pressure of 20 psi. 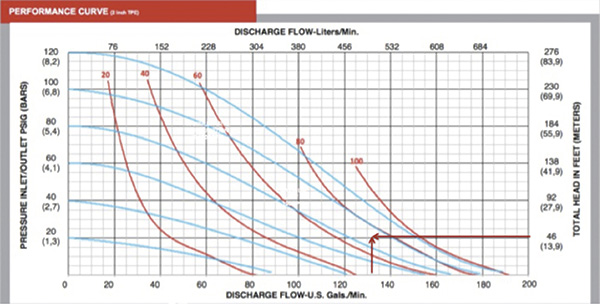 Figure 4. Operation at 133 gpm with a liquid discharge pressure of 20 psi.

Therefore, the operating cost can be estimated as follows:

To understand how these numbers can vary dramatically from one AODDP to another, Table 1 details the variations between the pump manufacturer’s redesigned pump, the original pump and several other AODDPs.

Table 1. The operating requirements of the redesigned AODDP and other pumps

As shown in Table 1, both the operating pressure and required SCFM can vary greatly across these pumps. AODDP users no longer have to accept that the high cost of energy is part of the cost of doing business, opting to either raise prices or accept a lower profit.

Paul McGarry is sales manager for All-Flo Pump Co. He may be reached at pmcgarry@all-flo.com.