What you can get from a multigrade viscosity hydraulic fluid.
by Jim Carroll
11/16/2018

In business, every cent counts toward a company’s bottom line. This is especially true when the business in question relies on the use of heavy machinery. Every cent that is not spent on repairing equipment is another cent that can go toward profit. The potential for generating revenue increases exponentially when heavy equipment can be kept running longer and is more resilient, avoiding the need for offline maintenance.

Of course, managers have to consider which maintenance costs are worthwhile. After all, spending money on aging equipment that may suddenly break down is unlikely to pay off. But cutting corners on some resources can hurt a company’s bottom line more than it can help. One example of such a dilemma is choosing between a multigrade viscosity hydraulic fluid versus a lower-quality and less expensive alternative. While it may sound cliché, the evidence is clear: you get what you pay for.

It is not uncommon to hear operators rev an engine on startup, especially when they are using older equipment that is acting sluggish. What they are technically doing is using increased rotations per minute (rpm) to compensate for the thinning of the equipment’s hydraulic fluid in order to get the engine to do the same amount of work as it ordinarily would if it had a higher-quality hydraulic fluid. Whether the equipment is powered with diesel or electricity, that operator is paying an energy penalty when they increase rpms. If the viscosity of the hydraulic oil were to retain its grade, then the engine could do the same amount of work with less energy—i.e., the operator would not have to rev the engine.

Sluggish starts and performance are just a couple of symptoms related to lower quality hydraulic fluids. Another major indicator can include excessive chatter and vibrations as the equipment’s actuator is being engaged. This is often caused by cavitation, or a lack of sufficient oil in the pump. Cavitation results from a lack of fluid going into the pump and is usually attributed to poor viscosity—either because heat has caused the hydraulic fluid to become too thin to provide enough protection, or because cold temperatures have caused the fluid to thicken to the point that it does not adequately flow. Cavitation results in excessive wear in the pump and greatly increases the potential for catastrophic equipment failure.

Varnish buildup can also have a dramatic effect on equipment performance. Varnish starts as a sticky-soft residue tenaciously clinging to metal. The sticky-soft nature of the varnish attracts wear debris while preventing antiwear additives in the oil from attaching to the metal, thereby dramatically increasing wear. Varnish buildup leads to a chain reaction within the hydraulic system that results in erratic operation, increased wear on valves and pumps, shorter fluid life due to increased oxidation, less fuel efficiency and increased downtime.

Another issue related to hydraulic fluid quality is leaks. Leaks often result from seal failure and ruptured hoses, both of which can be caused by excessive operating temperatures. Seals and hoses are both made from rubber, which crystallizes and becomes brittle when exposed to extreme heat.

It is important to identify the signs indicating inferior-quality hydraulic oils, but knowing what to look for in a superior hydraulic oil can keep managers from being put in that position in the first place.

Viscosity—a fluid’s resistance to flow—is the most important criteria to evaluating hydraulic fluid performance. After all, hydraulic systems are all about flow. Keep the lubricants flowing, and the equipment pumps will more efficiently deliver better and more consistent performance.

A fluid’s viscosity changes as temperatures increase or decrease—the higher the temperature, the thinner the oil and, consequently, the lower the viscosity. Cold temperatures have the opposite effect of thickening the oil and raising viscosity. This change in viscosity in a given fluid determines its viscosity index (VI). Hydraulic fluids with a high VI will maintain the same viscosity over a wider range of temperatures, resulting in better efficiency, less fuel consumption and decreased maintenance—all of which contribute to keeping the equipment running more efficiently with less downtime.

Another key attribute in superior hydraulic fluids is the use of a superior base stock. Fluids that use a higher-quality base stock have inherently higher VI ratings, so they are less likely to lose viscosity as operating temperatures increase. As a general rule, synthetic hydraulic fluids will always provide a higher VI than petroleum-based fluids. Even the best petroleum-based hydraulic fluid will not have as high a VI as a synthetic fluid, due to the nature of the molecular structure of the base stocks involved.

Not All Multigrades Are Alike

Hydraulic fluids can be made into multigrade products with the inclusion of high-molecular weight polymers. The molecular structure of these polymers resembles tiny springs, which are chemically calibrated to expand and contract depending on the temperature to which they are exposed. The molecular nature of the polymer causes the oil to adhere to its surface, but the adhering qualities vary depending on operating temperature. When it is hot, the coil expands, and in extreme heat it expands dramatically, resulting in an increase of surface area. When the oil molecules adhere to the increased surface of the polymer coil, it causes the oil to thicken just enough to maintain its grade (as opposed to thinning). Conversely, when temperatures drop, the polymer’s coil shape contracts, resulting in less surface area and causing the oil to thin, again maintaining its grade.

While multigrade fluids can provide superior performance, not all multigrade fluids are equal. This is because the majority of fluids use polymers that are essentially plastic in their composition. As plastic, they tend to break down after repeated cycles through a system’s pump, which can fracture and shatter the polymer after extensive use.

By contrast, a multigrade product that is shear stable is engineered to withstand such punishing conditions. Shear-stable products are formulated with polymers that are more like rubber than plastic. Rather than shattering or breaking apart when cycled through a pump, these polymers will instead bend and flex, returning to their normal shape upon exiting the system. The result is a product that does not break down as quickly, providing longer operating life while requiring less maintenance.

The performance benefits of shear-stable fluids really shine when subjected to the three biggest risk factors: heat, pressure and time. When heavy equipment is in operation, conventional fluids get hotter, which causes thinning.

This is when hydraulic system performance begins to suffer, straining to keep up with output. A real-world example of this would be a forklift operator lifting a heavy load. As the equipment begins to strain, the operator is forced to increase rpms by revving the engine to complete the work, consuming more energy in the process. As this goes on, it takes more time to do the job, and more fuel is consumed. However, a multigrade shear-stable fluid is able to stabilize viscosity at a wider range of temperatures, allowing operators to increase performance and do more work without increasing fuel consumption (see Image 1). 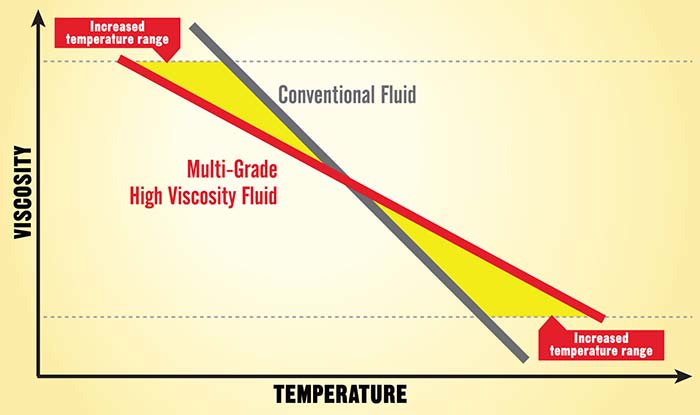 Superior multigrade hydraulic fluids provide a number of performance benefits while improving efficiency and prolonging equipment life. Industry studies provide documented evidence that users who put their faith in multigrade viscosity hydraulic fluids experience energy savings through reduced fuel and energy usage. Ultimately, the best proof for even the most skeptical user will be seen in their bottom line.

Jim Carroll is executive vice president of operations for Schaeffer Manufacturing Co. He may be reached at 315-865-4100 or jimcarroll@schaefferoil.com. For more information, visit www.schaefferoil.com.