A heating, ventilation and air-conditioning (HVAC) piping system is designed to convey a heat transfer fluid to multiple air handlers, providing cooling (chilled water) or heating (hydronic heating) loads in a building. A typical HVAC system consists of a primary loop and a secondary loop. The primary loop contains the chiller or boiler along with primary circulating pump(s). The secondary loop draws fluid from the primary loop and consists of a secondary pump along with the supply header piping, various air handlers and return-header piping. The primary and secondary loops are connected, so fluid mixes between the loops.

The key to designing an HVAC circulating water system is to control the air handling flow rates to maintain the temperature in the conditioned spaces. There are two methods to achieve this goal; one is a constant volume system, the other a variable demand system. Below is a case study of how a project in the Pacific Northwest achieved cost savings by using a variable demand system versus a constant volume system.

Before you design a new system, or make major modifications to an existing piping system, it is a good idea to create a computerized hydraulic model of the HVAC piping system. Piping software can provide the information needed to properly select the pumps and control valves. The model also provides a good understanding of the interaction of pumps, pipelines and control valves. 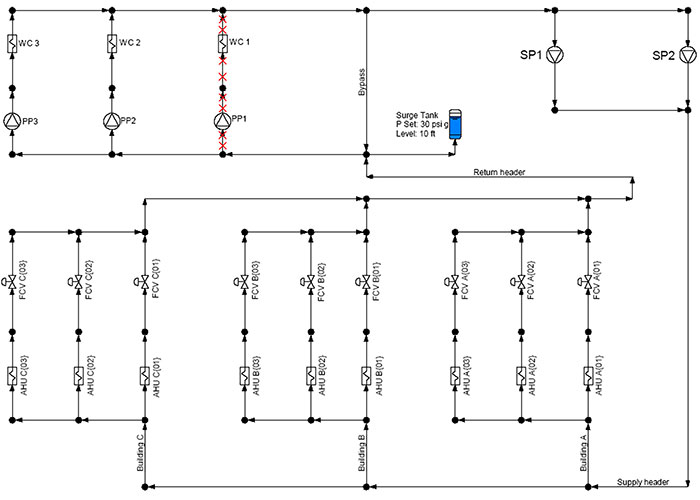 The information from the computerized model can also be used to perform an economic analysis of pumping costs for both types of control systems. Image 1 is a rendering of a modeled HVAC system.

To perform this analysis, look at the differences between constant volume control and variable demand control, and perform a pumping cost analysis for each.

For this project, the yearly pumping costs for the system were an energy rate of 8 cents per kilowatt hour (kWh). This should provide a conservative estimate of costs elsewhere as the national average is close to 13 cents per kWh. The operating costs for pumps SP1 and SP2 are $10,012 and $10,062. Together, the operating cost for the secondary pumps at a constant volume and fixed speed is $20,074.

The system is capable of meeting the demands year-round using only one secondary pump. The operating costs for this secondary pump are $3,080 in the summer, $140 in the winter and $560 in the combined spring and fall seasons for a total of $3,780 for the year.

The annual operating cost for the secondary pumps is less than the cost associated with the constant demand system. The reduction in cost can be brought about by installing a variable frequency drive (VFD). It is important to factor in the cost of the VFD in your life cycle pumping cost calculations. 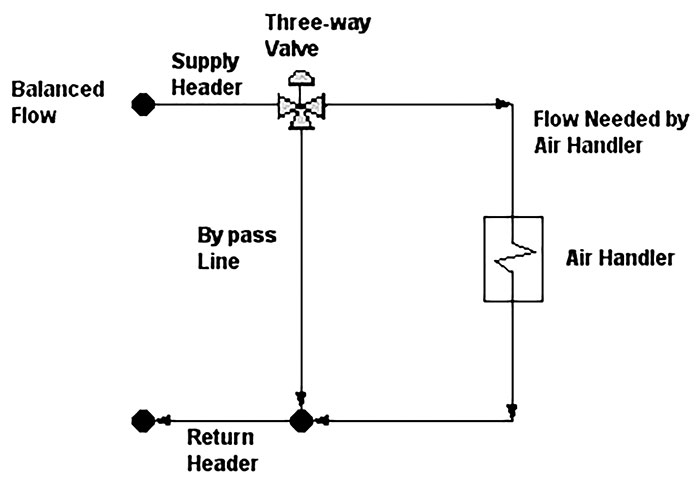 The major advantage of the constant volume design is that once the system is balanced, by setting the design flow rate to each load, the control system is stable. The three-way valve is able to direct the flow to the air handler without affecting the total flow rate through the system.

The disadvantage to the constant volume system is the flow rates to each air handler are the same year-round regardless of the system’s heating or cooling load. In other words, in an HVAC chilled water system, the flow rate through the secondary loop is the same for the coldest day of winter as it is for the hottest day of summer. Therefore, constant volume systems typically incur a higher operating cost because the flow rate through the secondary system is the same regardless of the system load. 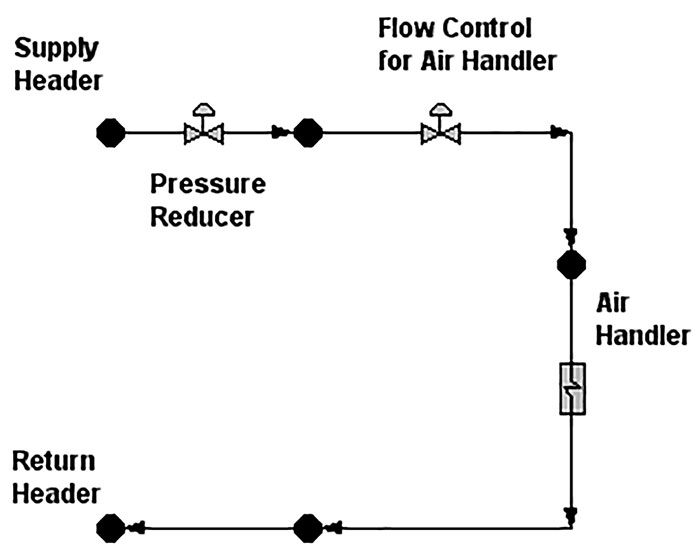 Using a variable demand system saves on the operating cost, because the flow rate through the system varies to meet the needs of the system demands rather than maintaining a constant system flow rate.

Based on the various load combinations to the air handlers, the most hydraulically remote control valve in the system can change. Therefore, additional differential pressure sensors may be needed, resulting in additional instrumentation.

There may be many loads in a large HVAC system, so it can become cost-prohibitive to insert differential pressure instrumentation on each control valve. It can be more cost-effective to install the differential pressure controls only on the valves that may face the lowest pressure drop. This requires a thorough understanding of the HVAC piping system.

Dominik Fry, P.E., is Engineered Software, Inc.’s business development engineer and has nearly a decade of experience in the energy industry while working on some of the nation’s largest energy projects. Fry earned a Bachelor of Science at Montana State University. For more information, visit
www.eng-software.com.