While it is still a relatively new technology, the future of 3-D printing looks bright.
by Anand Gnanamoorthy, Frost & Sullivan
03/27/2014

In the movie, “Hitchhiker’s Guide to the Galaxy,” the hero wishes for a cup of tea, and it is “printed.” While this is science fiction, consider the following scenario: Your car has broken down, and it needs a replacement part. Instead of relying on the local mechanic to find it, the exact part can be printed at your home.

This scenario—which is a fantasy—might become reality sooner rather than later with the aid of three-dimensional (3-D) printing. The power of this technology has now reached deep into manufacturing and consumer spaces.

The 3-D printing process, also referred to as additive manufacturing, involves layer by layer printing of a particular material to create an object.

Current State of the Industry

Crossing a major inflection point, 3-D printing has progressed from being a technology innovation that was used in laboratories of Fortune 500 companies or high-end universities to being used by hobbyists and early adopters. This transformation impacts the market tremendously. In recent years, the market for 3-D printing has exploded.

The global 3-D printing market is worth an estimated $2 billion, and it grows exponentially every year. Apart from industrial applications, home users have a keen interest in the technology. This has led to a sharp increase in the number of 3-D printer suppliers. 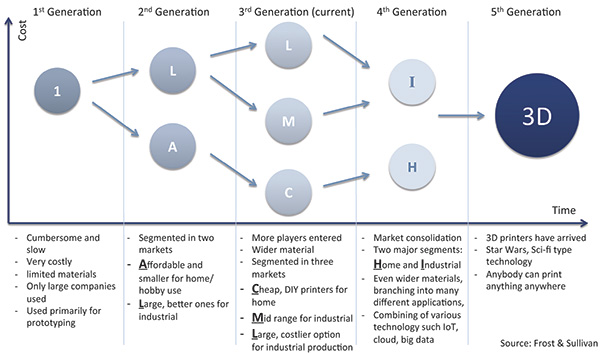 Figure 1. The evolution of 3-D printers

For example, last year only a handful of suppliers participated at the Consumer Electronic Show (CES). This year, CES expanded the space by 25 percent, allowing more than 30 exhibitors. The demand was so high that organizers had to turn down some companies because of space limitations.

As 3-D printing becomes more mainstream, big players are taking notice. Many companies have plans for using 3-D printers for their manufacturing or developing printers. While the initial 3-D printers could only print plastics, 3-D printers can now print many materials, which include metals, food grade materials and body parts. Since its inception, 3-D printing has advanced significantly. This has allowed business applications that were previously impossible to come to fruition.

Because of the way that a 3-D printer places each layer of material, highly intricate details can be manufactured, providing an advantage over traditional manufacturing techniques. 3-D printing has unlocked possibilities for enhancing the value chain of small-scale, critical manufacturing processes. The precision required can be achieved without the expense of intense labor and extended time—for instance, preparing molds for creating complex shapes would be unnecessary. An application that has proven useful is manufacturing axial turbine blades in jet engines and compressors. Many high-end turbine blades are sculpted from a solid block of metal. This requires multiple processing stages and can sometimes require more than 50 individual manufacturing processes. Requiring only one step, 3-D printing would streamline the process.

This technology reaches beyond general manufacturing—food, medical sciences and even retail are affected. Because each component is printed separately, 3-D printing has the potential to put the mass in “mass customization.”

Still in its infancy when compared to other new manufacturing technologies or tools, such as computer numeric control (CNC) or robotics, 3-D printing is being investigated for use in mold-making for castings or printing one-off specialized plastic or rubber based components, such as diaphragms. Complex and intricate molds can be quickly developed and the lead time to produce molds can be drastically reduced. Another key application for 3-D printing includes printing specialized and complex impeller designs to drastically increase pump efficiency. As traditional component manufacturing methods evolve with the influence of 3-D printing, an entirely new pump technology would be invented.

A few drawbacks associated with the technology for large-scale manufacturing applications exist—including the high cost of the initial investment, the special types of materials used and noncompliance to accepted manufacturing standards. Another major consideration is speed. While 3-D printers have increased the printing speed, they are still considerably slower than the mass manufacturing process. As a result, 3-D printing continues to be used in prototyping and special parts in which product complexity helps offset some of the cost and speed issues.

Future of the Industry

With the expansion of 3-D printing in industrial applications, potential for the growth of the equipment associated with technology exists. As new players enter the market, great demand is expected for the high performance servo and the stepper motors used in the printers in the near future.

The present day adoption of 3-D printing technology can be compared to the history of personal computers (PC) during the advent of the technology. 3-D printing is at the same stage as the PC in 1980s. Many formats and no unified technology existed, and they were costly and had many home-grown startups, such as Apple and Microsoft, challenging big companies. Moreover, consumers did not have a deep knowledge of the technology, but they still bought one. More than 30 years later, the PC has revolutionized industries. Just as the PC’s growth helped reduce costs dramatically, which aided in increased adoption, 3-D printing is expected to experience the same acceptance path.

Initial market estimates indicate significant growth rates with numerous solutions, varying technically, and driven by a number of startup companies. Convergence of existing ideas for devising the best possible solution is needed, and key players of the market will be established as a result of consolidation in the upcoming years. The future of the industry seems bright, offering several opportunities for innovation. With the consolidation of companies and mass manufacturing of the technology, 3-D printers may become ubiquitous, increasing accessibility as prices decrease. Equipped with online connectivity and resources, such as cloud computing, the 3-D printing process can be revolutionary.

Anand Gnanamoorthy is senior analyst for the Industrial Automation and Process Control Group at Frost & Sullivan. He can be reached at liz.clark@frost.com. For more information about Frost & Sullivan, visit www.frost.com.