3 Factors to Consider in Designing a Disc Coupling

Any coupling that connects rotating equipment generally serves two main purposes: transmitting torque and taking up misalignment. While in principle this can be fairly straightforward, there are many ways this has been accomplished. The primary design challenge has always been getting a coupling to transmit as much torque as possible, yet require as little force as necessary to be bent out of alignment.

Economics is generally the driving force behind a great percentage of products. A very torque-dense coupling can be economical to produce because of its smaller overall diameter. Having a lower torque-dense coupling that can be easily misaligned protects and extends the bearing and seal life of connected equipment.

The forces required to misalign a coupling are called coupling restoring forces. Restoring forces of a coupling can be an important consideration when developing a drive train system. High restoring forces can result in higher vibratory loads on bearings and seals, which can lead to premature bearing and seal failure. 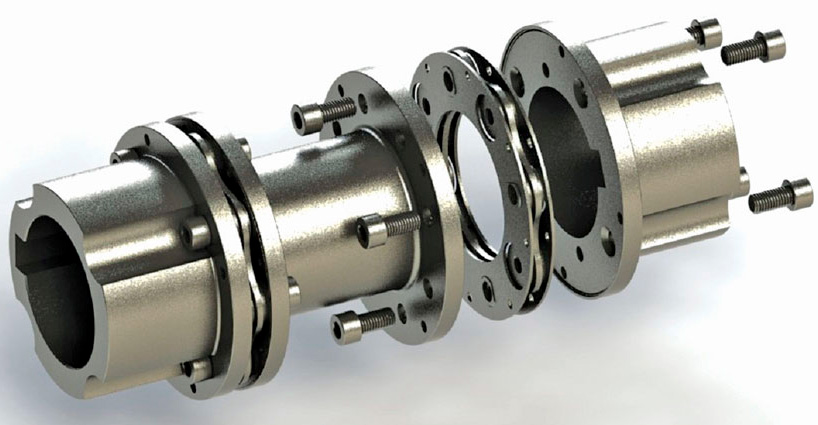 In order to arrive at a restoring force value, take the coupling angular spring rate and multiply it by the anticipated running misalignment (see Equation 1).

Some low-cost couplings like jaw style or elastomer donut-type couplings can generate high restoring forces because they have high misalignment ratings.

Even though the coupling can take the misalignment, bearings and seals could have significantly shortened life.

Gear couplings, on the other hand, have a varying level of restoring forces based on the amount of torque they are transmitting. This is because the gear teeth are transmitting torque through the same plane that needs to slip when being misaligned. The higher the transmitted torque, the higher the force required to misalign the coupling because the teeth do not want to slide due to friction. This can worsen significantly if lubrication is neglected.

Gear couplings are very torque dense, which makes them economical, but they can have some of the highest restoring forces in the industry.

Table 1 shows some basic comparisons between different styles of coupling and their respective restoring forces. Selection of a style of coupling depends on the application requirements.

Table 1. Comparisons between different styles of coupling and their respective restoring forces

The end user may not share the same motivation as the original equipment manufacturer (OEM). The OEM may be more concerned with price and delivery, while the end user may want higher levels of performance and longer life.

No matter the selection criteria, whenever torque and misalignment occur in the same plane, they have a dependent relationship. This issue can generate high restoring forces.

When designing a coupling, a manufacturer takes into account many variables. In some cases, restoring forces are byproducts of the type of coupling being designed as well as other factors such as cost control, torsional stiffness requirements and torque-carrying performance.

Disc couplings are the preferred choice for any application that demands a long life and low-maintenance coupling. Here are some competing factors in designing a disc coupling and how manufacturers can address those challenges.

In order to make a disc coupling with a low restoring force, ideally the disc laminate stack should be very thin. However, in order to transmit torque and have a stable bolted joint, the disc laminate stack needs to be fairly thick. It is possible to get the best of both by imbedding threaded bushings into the disc pack and using ultra-high-strength stainless steel to help reduce thickness and increase strain properties. This means the manufacturer has tried to get the disc stack as thin as possible without compromising coupling torque or joint stability.

Most manufacturers are stuck using a disproportionately thicker disc pack in order to achieve proper bolted joint mechanics, and as a result they only need low-strength material to handle the torque. An alternative is a high-performance disc pack that uses ultra-high-strength stainless steel, which allows for a thinner over all laminate stack translating into lower restoring forces. This ultra-high-strength stainless steel also extends the life of the discs as they are repeatedly bent because of misalignment.

Using thinner discs allows them to flex out of alignment easier—lowering restoring forces. However, thinner discs require a manufacturer to use more of them to achieve the overall pack thickness required, and this means increased costs. Using the ultra-high-strength stainless steel can result in very thin discs in order to further reduce restoring forces.

When selecting a coupling for an application, end users should make sure they check out the restoring forces of the coupling. Their bearings and seals will appreciate it.

Ryan Marks, P.E., is the principal engineer at PSC Couplings. He has designed numerous disc coupling solutions for rotating machinery across many different marketspaces.

Seals
Fugitive Emission Testing of Flange Gaskets
Examining the standards that guide gasket testing.
Bearings
The Evolution of Ultrasound Bearing Monitoring
This technology is for more than just troubleshooting.
Seals
How to Contain Mixers & Agitators
Air seals prevent powder and slurry leakage in safety-focused and harsh industries.
Seals
Influence of Bearing & Seal Characteristics on Pump Vibrations
Understand the process of evaluating bearing and seal hydrodynamic and mechanical characteristics, as well as its modeling, in the frame of rotor dynamics analysis.
Bearings
Bearing Assembly Retrofits: Not Just for Overhung Pumps
Upgrades improve pump reliability and reduce maintenance costs for operators.