Material hardness by itself is not always a virtue.
by Mark P. Slivinski
Carbide Derivative Technologies, Inc.
08/15/2017

The challenges of successfully designing and applying mechanical seals are well documented and include, among other things, lubrication, friction and wear, heat dissipation, maintaining parallel running surfaces and minimizing leakage. Until another viable sealing technique is developed, the mechanical seal is here to stay, along with inherent design and application challenges due to the nature of how a mechanical seal works. Recommendations to successfully manage these competing priorities were contained in the article, “Solving Sealing Problems by Keeping Faces Close and Parallel” (Pumps & Systems, April 2016, read it here).

Mechanical seal reliability continues to be plagued by wear-life limits and dry running due to conditions such as inadvertent loss of pumpage, dry startup, flashing fluids, shaft movements or misalignment or pressure fluctuations. The seal manufacturer is correct to assert that the foregoing is not the fault of the seal. After all, a seal running in a well-lubricated environment should last an acceptable period of time.

However, when the correct balance of all parameters for proper seal performance is not present, it is the mechanical seal that breaks down, even though the cause is not the seal itself. The cause-and-effect relationship between the mechanical seal and the rest of the system within which it operates is out of proportion, to the discredit of the seal. Causes can develop anywhere in the system, but the effect is that the mechanical seal deteriorates as a result. That is, the seal becomes the “fall guy” for many system ills, as well as application and operational mistakes.

Mechanical seal designers need sealing surfaces that will withstand the system ills that will befall them during their running life. Incorporating hard materials and surfaces addresses the issues of wear life and a limited number of lubrication problems. And for 30 years, hardness has been the mantra for sealing surfaces: the thought is, harder is better. In taking that to the limit, this quest for hardness has progressed to the point of attempting to apply the hardest material on earth. That’s great for wear life in a lubricated environment, but it does not address issues of flashing, dry running or edge running conditions due to pressure upset. Any of these conditions will cause hard faces to groove and gall within seconds or minutes, resulting in catastrophic leakage and a costly repair event.

For hard-coated surfaces, the mechanical and thermal stresses caused by these conditions can cause delamination with the same results. Mechanical seal manufacturers and users have resorted to complex and expensive lubrication systems to keep the seal faces lubricated and avoid the foregoing conditions in the operating environment surrounding the seal. By implementing mechanical seal support systems, the industry has created an “environmental cocoon” where the seal can comfortably operate. But this increases both capital and operational costs. 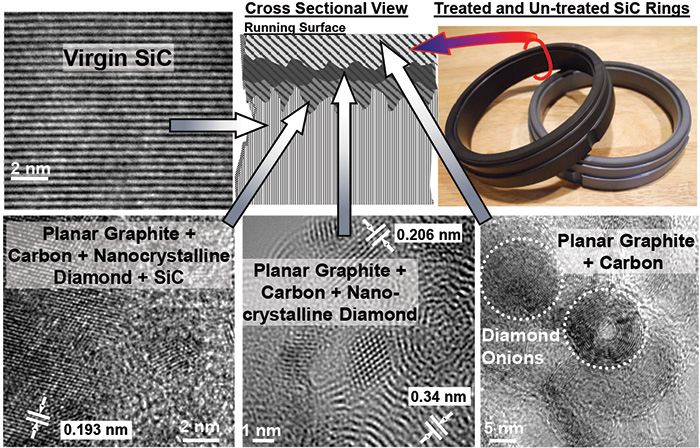 Figure 1. Conversion of silicon carbide surface results in a matrix of carbon nanospecies that progressively increases in hardness with depth (Courtesy of Carbide Derivative Technologies)

What is needed is a seal surface that is robust in both its wear life and ability to survive flashing, dry running or edge running conditions due to pressure upset. That would cover all the bases, resulting in increasing system mean time between maintenance (MTBM) and mean time between failures (MTBF) without resorting to complex and expensive mechanical seal support systems. Such a surface was described in the article “Surface Conversion for Dry Running Performance” (Pumps & Systems, June 2009, read it here), a functionally graded surface composed of various carbon nanospecies derived from silicon carbide (see Figure 1). The gradation went from the self-lubricating planar graphite in the upper zones to harder nanodiamond zones deeper into the surface near the zone where it mixes with the virgin silicon carbide. The result is a hard running surface that also contains self-lubricating graphite. The self-lubricating graphite enables dry running, supported by hard underlying zones, which enable long wear-life and provide improved MTBM and MTBF under all operating conditions.

Extended wear life and dry running performance of this surface has been demonstrated numerous times, some of which were shown in the June 2009 article as well as the article “Treated Carbide Surfaces Enhance Running Performance” (Pumps & Systems, August 2014, read it here). Extended wear life can be demonstrated in a harsh lubricating environment, such as flashing hot water. These surfaces have been tested in such an accelerated life test environment at 250 F and 145 pounds per square inch (psi) resulting in a PV = 207,000 psi-ft/min. Figure 2 on page 42 shows typical results after 100 hours running at this condition, and compares the performance of converted surfaces with those of hard untreated silicon carbide.

These results have been duplicated many times, and show that the converted surface will survive a poorly lubricated condition without damage. The hard, untreated silicon is destroyed, suffering extreme wear and grooving over 100 times deeper than the treated surface. Hardness surely did not enhance the performance in these conditions.

Recent advancements in the treatment technique for these surfaces have resulted in dramatically longer dry run time than previously reported. Dry nitrogen is a frictional environment that very few running surfaces can survive. Most running surfaces, such as graphite and diamond coatings, need some amount of humidity or hydrogen to lubricate. Hard carbide surfaces running in such an environment will produce noise and must be very lightly loaded. Figure 3 shows the results of a dry run performed in bone dry nitrogen (no water, no moisture, no intermittent wetting). This test was performed at ambient temperature and a PV of 50,000 psi-ft/min. Six hours and 43 minutes of run time was demonstrated on one seal ring pair, and five hours and three minutes on a second pair, with no noise. 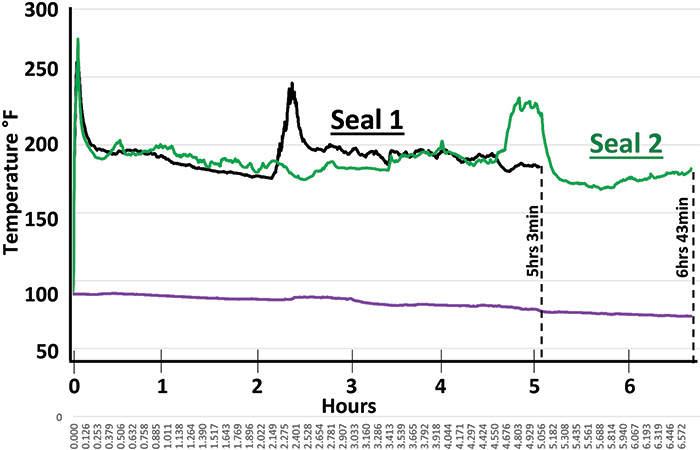 The dry running results of Figure 3 were achieved without impact to the accelerated life flashing hot water performance; the surfaces performed well in both environments. This new surface is robust enough for extended wear life and survives flashing, dry running or edge running conditions due to pressure upset.

The results presented here demonstrate that hardness by itself is not always a virtue. If hardness is combined with self-lubrication, that capability provides a one-two punch by providing both extended wear-life and long duration protection against the various causes of flashing and dry running. The benefit to the industry is a solution for mechanical seals that dramatically enhances MTBM and MTBF without resorting to expensive seal support equipment. Users of these surfaces will experience extended maintenance cycles and fewer repair events.

Mark Slivinski is president of Carbide Derivative Technologies Inc., winner of Frost & Sullivan’s Entrepreneurial Company of 2016 in Mechanical Seals Frictional Surface Treatment. He is also former vice president of global technology for John Crane International and may be reached at mslivinski@carbidederivative.com. For more information on CDT treatment for silicon carbide surfaces, visit carbidederivative.com.