The winner of the 2010 EcoTourism Award for the World’s Greenest Hotel, the Crowne Plaza relies on Grundfos Blueflux® technology to work in tandem with the hotel’s demanding heating and cooling system. The resulting combination is exceptionally low energy consumption, according to Jens Nørgaard, application manager for Grundfos Commercial Building Services.

To keep energy consumption and CO2 emissions as low as possible, the hotel insisted on the most innovative energy technology throughout the building. One of the world’s most advanced aquifer thermal energy storage (ATES) systems is located underground in the basement of the Crowne Plaza. Cold groundwater is used for cooling the guest rooms during the summer. The heat rejected from this process is reused for heating during the winter. 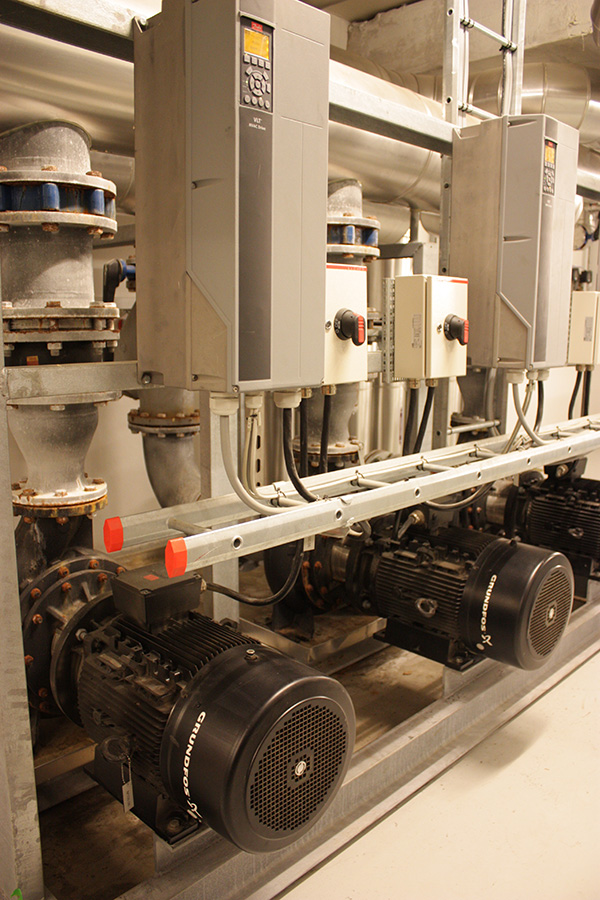 No active refrigeration is required while the groundwater is circulated through the hotel’s hydronic air conditioning system. By reversing the flow, the warm groundwater is also available for heating during the winter season.

During the heating season, the chiller is turned into a heat pump. The groundwater is cooled and returned to the aquifer’s cold well. The water is returned at a temperature similar to the temperature of the untouched groundwater.

The ATES system is designed to be compact. The entire system—without distribution equipment—occupies only 8 by 10 meters. To maximize energy savings and high heating temperatures, ammonia is used as a refrigerant.

The two chillers are fitted with frequency-controlled screw compressors, which enable the chillers to adjust the capacity to the actual load with the same efficiency, Nørgaard explained. Chillers rarely run at full capacity, and it is important that the efficiency is high. The groundwater pumps and all the other pumps are provided with frequency converters to allow them to adapt to flow requirement variations.

Both the energy efficient ATES system and a network of solar cells are part of the hotel’s green profile.

Grundfos delivered the pumps for the building’s air conditioning, heating and water boosting. The following products were supplied specifically for the ATES system:

Grundfos has also provided advancements in circulator pump technology and, in January 2013, released the MAGNA3. The MAGNA3 is based on the tried and tested MAGNA technology and Grundfos’ experience with electronic pumps. The permanent magnet motor, AUTOADAPT function and integrated frequency converter are still part of the MAGNA package.

The MAGNA3 reduces energy consumption by up to 75 percent when compared with a typical circulator. A main highlight of the MAGNA3 range remains the AUTOADAPT feature that guarantees optimum balance between comfort and energy efficiency. In MAGNA3, this is supplemented by the new FLOWADAPT control mode and FLOWLIMIT function that improves valve balance.

The MAGNA3 features a built-in heat energy meter that can monitor system heat energy distribution and consumption to avoid excessive energy bills caused by system imbalances and save the cost of installing a separate energy metering device.

With maximum heads of 60 feet and maximum flows of 550 gallons per minute, the extended MAGNA3 range features more than 35 single and twin pumps in cast iron or stainless steel. MAGNA3 is suitable for heating, cooling and domestic hot water circulation systems. It is designed to handle liquids down to 14 F, which makes it suitable for both tough industrial tasks and ground source heat pump systems.

A 12-story building on the harbor front in Arhus, Denmark, is home to the Grundfos Dormitory, which provides affordable living space to engineering students willing to test the Grundfos circulator pumps in action. This is a “living laboratory” in which the occupants work with the company to test initiatives and technologies that can minimize energy and water consumption.

The dormitory has 159 youth apartments for 206 residents and has a green profile with the standard of low-energy class 2015 and features an extremely low consumption of energy.

Grundfos and the board of the dormitory work on the implementation of advanced energy technological solutions. The goal is to reduce the behavior-related consumption of energy to a minimum. The dormitory residents contribute to the energy-related goals and try solutions that can help support the green profile. 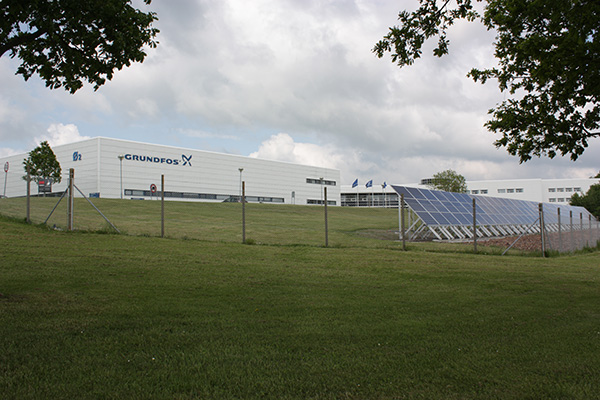 BJERRINGBRO, Denmark (May 30, 2013) – Grundfos Corporation has been in the pump market for more than 60 years and produces about 16 million pump units annually. These pumps include circulator pumps for heating and air conditioning and other centrifugal pumps for industry, water supply, wastewater and dosing. Grundfos currently covers about 50 percent of the world market for circulator pumps. Grundfos also produces standard and submersible motors and electronics for monitoring and controlling pumps.

The majority of activity for the Danish Grundfos companies takes place in the small town of Bjerringbro, where the company was established in 1945. Bjerringbro is a railway town with a population of about 7,500. It is located about 120 miles northwest of Copenhagen. Grundfos has many initiatives that focus on sustainability and groundbreaking technology.

Read more about the Crown Plaza Copenhagen Towers’ initiatives to reduce CO2 emissions and see video and photographic coverage of this and other pump tours at Pumps & Systems on Tour.