Several years ago, the Environmental Protection Agency (EPA) began an initiative to control excessive nitrogen and phosphorus pollution entering the Gulf of Mexico through watersheds. Although phosphorus and nitrogen are nutrients needed for aquatic plant and algal growth, excess amounts can have damaging effects. Farming states were under pressure to restore their surface water quality.

Too Much Nitrogen & Phosphorus

Surface water affected by excess nutrients turns green from algal blooms through a process called eutrophication. The anaerobic conditions produce an unpleasant odor and deplete aquatic life. Pesticides from the country’s booming agriculture industry had introduced excess nutrients to lakes, rivers and groundwater resources at the time of the EPA’s initiative.

Kansas, one of the highest wheat, grain and beef producing U.S. states, has 244 streams and 187 reservoirs with nutrient-related impairments. Based on Kansas Department of Health and Environment (KDHE) data, point sources such as municipal wastewater treatment plants account for 18 percent of total nitrogen and 25 percent of total phosphorus loading in the state. The city of Olathe, along with many other cities in Kansas, upgraded its water treatment facilities to decrease these nutrient levels.

In 1997, the capacity was increased to 3.0 MGD with the addition of a final clarifier and ultraviolet disinfection. The plant added a centrifuge dewatering system and aerated sludge holding basins in 2005. In 2008, the facility was expanded again to include an effluent pumping station.

However, average flows of 3.75 MGD hydraulically overloaded the upgraded plant. A new round of upgrades lowered the effluent nutrient levels and further increased the plant’s hydraulic capacity to 5.25 MGD.

In June 2010, Olathe broke ground on the Cedar Creek Wastewater Treatment Plant expansion. The expansion would increase the plant’s capacity by 1.5 MGD for a total capacity of 5.25 MGD.

The BNR plant design incorporated an aeration system and submersible mixers that introduce dissolved oxygen into the wastewater (see Image 1). The small bubbles from the aeration system have a larger surface area and longer residence time in the treated water than larger bubbles would. 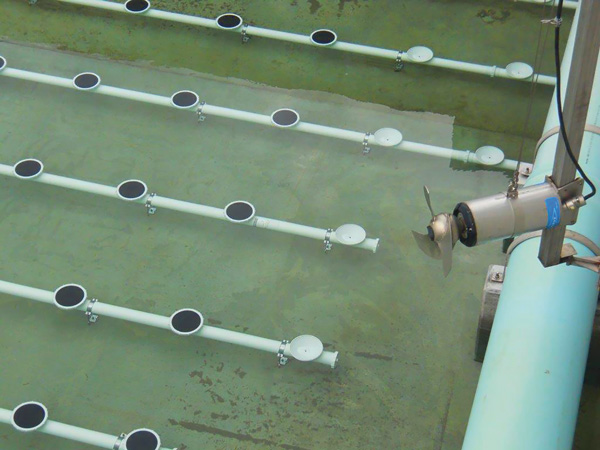 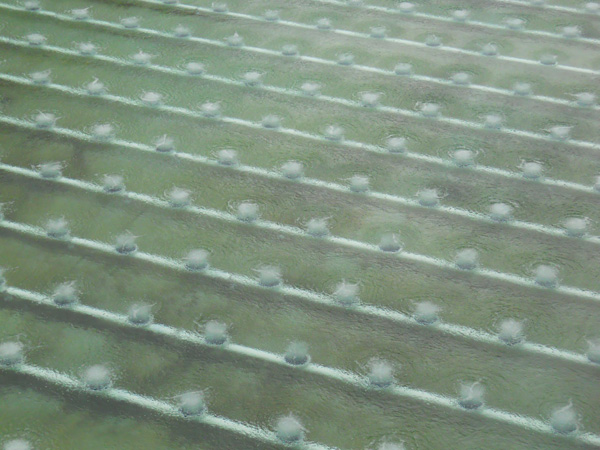 The mixer dispersed the dissolved oxygen throughout the wastewater. By combining aeration and mixing technologies, the controlled oxygen uptake and demand drove the biological reaction toward nutrient removal.

To remove nitrogen and phosphorous, the plant added a new five-stage biological process within the BNR plant. Nitrification and denitrification remove nitrogen compounds, and the biological uptake process removes phosphorus. A coarse-bubble aeration system maintains a dissolved oxygen tension in the last mixing zone of the BNR trains. This method produces larger air releases, which help bacteria to grow and consume dissolved phosphorus and nitrogen. At the end of the BNR treatment train, pumps recirculate a percentage of the forward flow back to the in-line fermenter for biological phosphorous uptake.

Throughout the entire BNR treatment process, dissolved oxygen meters and probes measure the oxygen levels. Based on the oxygen readings, the air volume is controlled in each train of the BNR process. Monitoring and controlling the air volume helps achieve nutrient removal and minimize operating costs.

The fine bubble diffused aeration system saved the plant up to 50 percent of energy costs compared with the plant’s previous aeration system technology. Continuous monitoring and controlling of the oxygen levels have also contributed to operation and maintenance savings.

Storage in the expanded extraneous flow basins dramatically reduced the frequency of wet-weather discharges. If discharging is necessary, both primary treatment and disinfection improve quality of the flow basin effluent.

Sydney Ulliman graduated with a degree in civil engineering and has worked for Xylem for the past three years. In her current role as a product communications specialist, she combines her creative thinking and technical background to develop written, verbal and digital communication for Xylem customers in the diverse fields of water and wastewater treatment.