Because of advanced control capability and potential energy savings, the use of adjustable frequency drives (AFDs) for motor control is expanding rapidly throughout many industries and environments. Users expect AFDs (also commonly known as variable frequency drives, or VFDs) to be reliable and perform consistently, even in harsh-temperature environments. High- and low-temperature extremes always provide challenges for electrical equipment, but modern solutions allow AFDs to deliver the same performance that is provided under normal operating conditions.

In general, motors are sized for the maximum load of an application, but this output level is not always required. To achieve energy savings when lower output is needed, AFDs control the frequency of the alternating-current (AC) power being delivered to the motor. The power module of the AFD contains the components that are responsible for delivering this AC power.

The three basic parts of the power module are the converter, direct-current (DC) bus and inverter sections. The incoming AC power passes through diodes, which split the power into the positive and negative components forming DC power.

This DC power is stored on the DC bus in capacitors. The DC power then passes through the inverter section, which uses insulated-gate bipolar transistors (IGBTs) to reconstruct an AC sine wave at the desired frequency that is required to run the motor. 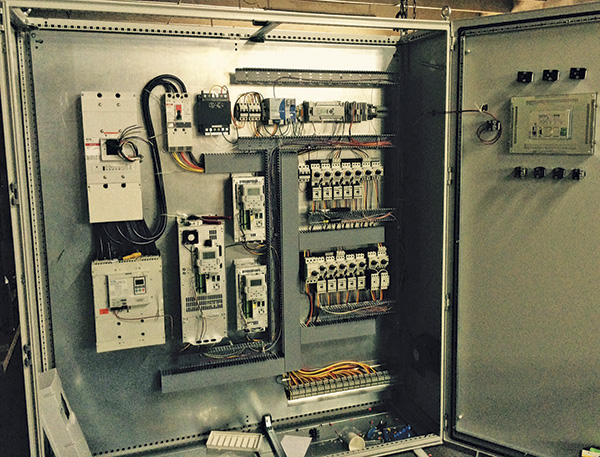 Three drives (Frames 1 and 3) are installed inside this control panel for an industrial conveyor. (Images courtesy of Eaton)

These components and the circuit boards for the control modules can be affected by high or low temperatures, which can lead to drive failure. AFDs are rated for an ambient temperature range designed to protect these components. However, users have options for operating AFDs at or beyond those temperature limits.

Heat is known to cause failure in many electrical devices, and AFDs are not exempt from this problem. Heat is generated through the AFD’s power conversion process and can be compounded by increased ambient temperatures.

Most AFDs are rated for ambient operating temperatures up to 40 C (104 F) or 50 C (122 F), but when an application demands operation in higher temperatures, a few options are available.
Users can choose a liquid-cooled AFD. A coolant is pumped through the drive to remove heat. This advanced cooling allows for a smaller footprint, but it requires a higher initial investment and requires additional maintenance.

Another option for AFDs that are in an enclosure is to add increased ventilation or air conditioning. This solution may be practical for a large control cabinet that has other temperature sensitive components. However, it includes additional cost, increases space requirements and adds another potential point of failure.

Another solution is de-rating the drive for the higher-than-rated ambient temperature. The drive’s internal cooling system includes the heat sink and cooling fan, which are designed to properly cool the drive when operating at its full-load rating.

By using a de-rating factor, a higher rated drive can be used at less than its full rating in higher temperatures. For example, a 61-ampere (A) drive that is normally rated up to 50 C can operate at 60 C, but it is only rated for 44 A at the higher temperature. At this de-rating of 28 percent, the power modules do not generate as much heat. The cooling fan will adequately cool the AFD in the elevated ambient temperatures. 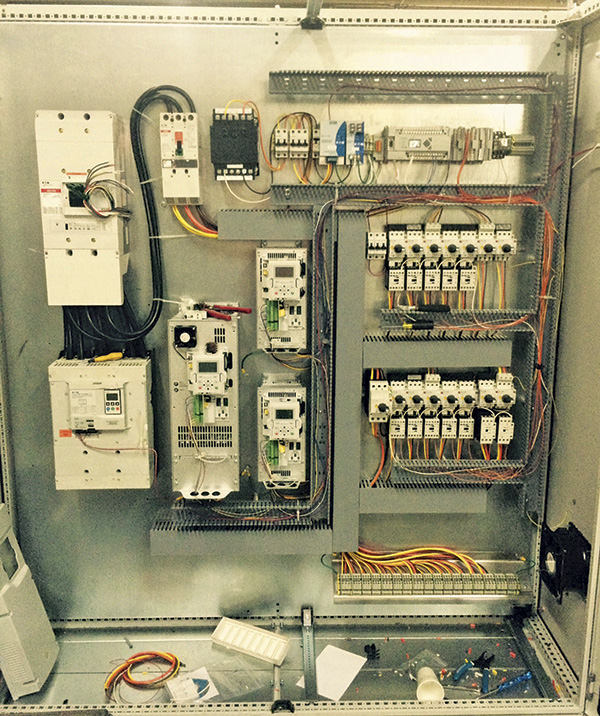 Operators can also use a flange mount kit to reduce heat within an AFD enclosure. The kit allows the drive to be mounted with the power module and cooling fan extending outside the enclosure. This allows heat to dissipate, keeping the internal temperature much lower. This solution is particularly useful for outdoor applications in which the enclosure may be in direct sunlight.

Just as AFDs may fail in high temperatures, low temperatures can also cause failure. The industry average allows for AFD operation down to minus 10 C (14 F), which can become a limiting factor in many applications.

Many pumping applications in the oil and gas industry can reach these low temperatures during the winter months. Even some indoor applications, such as conveyors for refrigerated warehouses, can expose AFDs to temperatures near or below minus 10 C.

The first solution for these applications involves adding a heater to the enclosure. This heater will warm the AFD and other components to maintain an acceptable operating temperature. However, the amount of heat provided depends on the heater size. To provide sufficient heating, a larger heater and enclosure may be needed, which also increases energy costs. In addition, this solution is not feasible if the AFD is not enclosed.

Some AFDs have an alternative mode of operation that allows them to function in temperatures as low as minus 30 C (minus 22 F). One program for alternative operation decreases the cold temperature fault from minus 10 C to minus 30 C with an alarm trip point at minus 20 C.

When the temperature is between minus 20 C and minus 30 C and the AFD is given a run command, the cold weather warm-up feature begins. The AFD sends a small amount of DC current to the IGBTs, which sends a 0.5 hertz signal to the motor. This current flow and pulsing of the IGBTs generates heat which warms the AFD up to minus 20 C, at which point it will begin to operate.

Some AFDs have an alternative mode of operation that allows them to function in temperatures as low as minus 30 C (minus 22 F).

As the general demand for AFDs grows, so does the number of applications that operate outside the normal ambient temperature range.

Matt Callahan has been with Eaton for more than two years and has held different roles in manufacturing, supply chain and marketing. He is currently a product manager with Eaton’s low-voltage adjustable frequency drives group. He may be reached at 414-449-6312 or matthewrcallahan@eaton.com. For more information, visit eaton.com.