Q. What are the effects of air pockets in a pump piping system, and how can they be eliminated?

A. Air-release valves are an essential component in the design of system piping. These valves are hydro-mechanical devices that vent pockets of air as they accumulate in a system. In general, as the liquid is pumped, entrained air will bubble up to the high points in the system piping. If the pipeline slopes upward, the liquid's velocity will move the air bubbles to stagnate at a high point. In contrast, if the pipeline is fairly flat and the inside surface of the pipe is very rough, or if the pipeline slopes downward, the fluid velocity may not be sufficient to keep the bubbles moving.

As a consequence, it is possible for a pocket of air to collect at these high points and gradually reduce the effective liquid flow area, which may create a throttling effect similar to a partially closed valve. Also, sudden compression of these air pockets can set up severe shock waves when released, with the potential for serious equipment damage. When pumping into a pressurized system, an automatic air-release valve may be required.

For vertical wet pit pumps on water service, it is usually appropriate to use both an air-release valve and a vacuum valve. The valves should be located on the high point of the pump outlet (discharge) nozzle and between the pump outlet (discharge) and the outlet discharge check valve. It is important to size and adjust the air-release valve to evacuate most of the air on startup. A small volume of air is desirable to cushion the water as it slams against the check valve on pump startup. A vacuum valve is usually desirable on vertical turbine wet pit/well pumps to release the vacuum accumulated during pump shutdown when the water in the column pipe returns by gravity to the wet well. If the vacuum in the column is not released to atmospheric pressure when the pump is shut down, it may result in a damaging water slam against the check valve.

For horizontal pumps that are not self-venting (trap air at the top of the volute), a valve should be located at the highest point on the volute case. Additionally, air-release valves may be installed on pipeline high points, changes in grade and at periodic intervals on long horizontal runs that lack a defined high point.

Q. What are the basic operating principles of sealing devices? 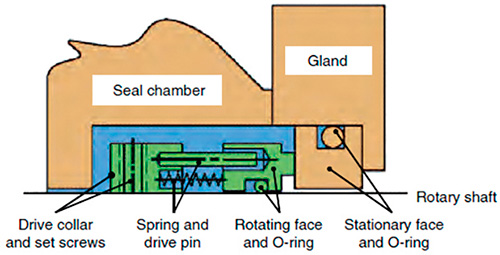 A seal consists of two sealing rings, either of which rotates relative to the other. One of the rings is mounted rigidly, and the other is arranged so that it can move freely and align radially, axially and angularly with the rigidly mounted ring. A dynamic seal is achieved when the two rings contact perpendicularly to the pump shaft. These rings are called seal faces, one the rotating face and the other the stationary face.

The faces are lapped flat, which results in low levels of leakage while providing long life on the basis of normal wear. Besides the two faces, the mechanical seal contains a set of secondary sealing elements and several metal parts. These serve the function of sealing dynamically and statically, loading the faces and transmitting rotation. The secondary seals provide sealing between the seal faces and the metal parts, such as mating ring housing, sleeve and gland. The metal parts transmit the torque and provide an axial mechanical force by means of a spring element to load the lapped faces.

Q. How can leakage in a rotary pumping system be detected and monitored for possible pump failure?

A. Leakage from installed pumps is detected in a number of ways depending on the hazard posed by the liquid being pumped and the surrounding environment. Leakage is monitored to identify the failure of the seal or pressure boundary. These leaks may be in the form of liquid or vapor.

Pressure buildup is one form of monitoring leakage. Leakage through the inboard seal of a dual unpressurized seal arrangement may be detected by a change in pressure in the seal reservoir containing the buffer fluid. This is accomplished by blocking off the reservoir from the vent for at least 10 minutes and noting the increase in pressure.

Pressure buildup in secondary containment areas of sealless pumps may also be used to indicate leakage past the primary containment.

For a complete list of means of monitoring leakage, refer to ANSI/HI 9.6.9 Rotary Pumps – Guidelines for Condition Monitoring.