Air valves are generally installed on pump discharge headers and at high points along force mains to prevent air pockets or vacuum conditions. Air and vacuum pockets can cause system surges, loss of efficiency and rapid corrosion of the pipe. Air valves are automatic, normally open valves that expel gases when they collect in the piping system. When wastewater enters the valve body, a float lifts through buoyancy and closes the orifice in the outlet of the valve so fluid is not expelled.

Wastewater air valves are uniquely designed to handle the debris, greases, solids, and corrosive fluids and gases associated with wastewater.

Air valves were first standardized by the American Water Works Association (AWWA) in 1992 with the publishing of AWWA C512, “Air-Release, Air/Vacuum, and Combination Air Valves for Waterworks Service.” AWWA recognized the need to expand product standards to include wastewater in 2006 (AWWA, 2006). In 2007, AWWA developed a definition of wastewater for use by the standards committees.

In response, the AWWA Air Valve Committee began in earnest in 2008 to expand C512 to include air valves designed for the newly defined wastewater service. The result was the 2015 edition of C512 and a revision to the accompanying Manual of Practice M51. The new standard included the addition of cast and fabricated stainless steel construction along with two recommended purchaser options. Purchasers were advised to consider a test pressure less than 20 pounds per square inch gauge (psig) for gravity flow, low-pressure flow or static non-flow conditions. Further, purchasers were advised to consider an interior epoxy coating to reduce clogging and prevent corrosion in wastewater service.

Several design requirements were added for wastewater to prevent clogging. Wastewater valves must have a minimum inlet size of 2 inches, the valve body shall be elongated, and the interior bottom shall be sloped to the outlet to facilitate draining. The body is also equipped with a 1-inch drain and a 1/2-inch flush port on the top to facilitate backwashing. As shown in Image 2, wastewater air valves come in several different styles. They all share the design feature of elongated bodies, corrosion resistant trim and float operation.

The elongated shape of the body is essential; when wastewater enters the valve, it compresses the air trapped in the valve as the system operating pressure increases. In accordance with Boyle’s gas law, as the pressure in the valve increases, the volume of the gas in the valve is reduced inversely proportional. Therefore, if a valve used at 80 psig (94.7 pounds per square inch absolute [psia]), the volume of the air in the valve will be compressed by the ratio of pressures, or 14.7/94.7, or 15 percent of its beginning volume. Hence, the bodies are elongated or conical in shape so that the wastewater is held away from the outlet orifice mechanism by the compressed air. 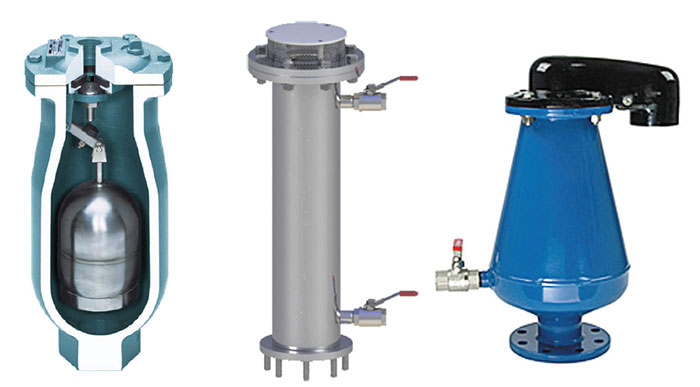 Whether used for water or wastewater service, here are three basic types of air valves as defined in AWWA Standard C512.

Air-release valves are probably the most widely used type of air valve and are characterized by their small orifices, weighted floats and leverage mechanisms. The combination of these three features allow air-release valves to expel air or gas at full operating pressure. Since air-release valves have orifices that range in diameter from 1/16 to 1 inch, they have a limited capacity for admitting and exhausting air. Users should not expect to fill or drain a long forcemain using just an air-release valve; it could take days. Air-release valves automatically vent small pockets of accumulated air or gases as they accumulate in a liquid piping system.

The second type of air valve is the air/vacuum valve, which has a full-size orifice ranging from 1/2 to 20 inches, and as a result, can exhaust large volumes of air. The valve also will admit large volumes of air to prevent a vacuum condition from occurring in the pipeline and to allow for draining. It is important to note that under normal operation, the valve is held closed by the line pressure and will not relieve accumulated air. Air/vacuum valves do not have mechanical linkage and, because of the large diameter orifice, have no ability to open while the system is pressurized. Therefore, an air-release valve is also needed to relieve air and gas during system operation. 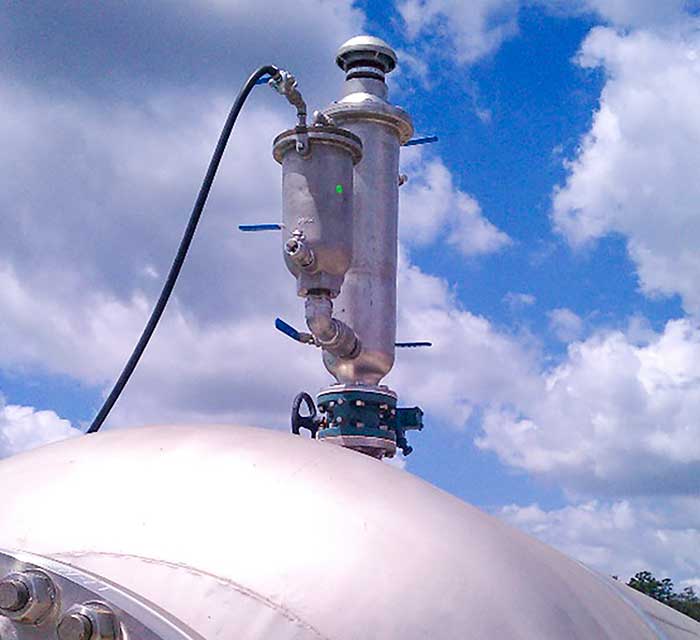 When air is allowed to accumulate in pressurized forcemains, efficiency is sacrificed, and serious system damage can occur. By having an understanding of the various types of wastewater air valves, system designers can better select and install air valves for the protection of liquid piping systems.

A combination of the liquid and water-carried waste from residences, commercial buildings, industrial plants and institutions, together with any groundwater, surface water and stormwater that may be present.

John V. Ballun, P.E., is president and CEO of Val-Matic Valve & Mfg. Corp., headquartered in Elmhurst, Illinois. A mechanical engineer with over 40 years of valve design experience,
Ballun has developed valve standards for AWWA and Manufacturers Standardization Society. He may be reached at
jvb@valmatic.com. For more information, visit valmatic.com.