Choosing the sealing solution that will be the most cost-effective option for a particular application is not as simple as selecting the one that has the lowest one-time cost.

To assist users in choosing the best seals, the Fluid Sealing Association (FSA) created a life-cycle costs (LCC) calculation tool that enables end users to compare solutions to determine which offers the lowest cost over the life of the pump.

The FSA's LCC calculation tool allows users to compare additional considerations, including the annual operating cost of each sealing solution. The tool calculates the traditional elements, such as spare parts and labor, plus parasitic losses that are often overlooked. The LCC tool can determine these losses using standard engineering calculations and data from the user's inputs. Annual component considerations can be grouped as:

Operating costs. These costs are items needed to support the sealing system such as cooling water, flush and quench fluids, buffer and barrier fluids, barrier gas, and/or effluent treatment.

Equipment maintenance and repair costs. These are associated with the need to perform repairs and replace parts on the pump because of failure of the sealing solution.

Seal maintenance and repair costs. These costs are associated with reconditioning the mechanical seal or replacing the packing rings, lantern ring and sleeve.

Downtime and loss of production costs. This is the cost of lost production from the unexpected failure of the sealing solution, which affects the operation of an entire production unit

Environmental costs. This is the cost of complying with environmental regulations for the particular sealing solution. An example includes monthly organic vapor analyzer sniffing of single seals. It could also include penalties and fines for fugitive emissions.

Energy costs. This is the frictional power consumed by the seal or packing. It is also the pump heat soak, energy removed from the pump to reliably operate the shaft sealing solution. It also takes into account energy consumed in additional downstream processing.

Combining one-time costs with total annual operating costs, the LCC tool can determine an expected total LCC based on the projected life expectancy of a particular pumping asset. It also provides an output of the energy that a particular sealing system consumes with a carbon footprint in the form of "equivalent carbon dioxide emissions per year."

As an example, consider a typical service encountered at an oil refinery that is pumping a hot hydrocarbon fluid at 650 F (343 C). For this, three potential candidate sealing solutions can be compared:
Scenario 1: Single seal with American Petroleum Institute (API) Plan 23 (heat exchanger cooling the seal chamber).

Scenario 2: Single seal with API Plan 32 (external injection of a clean fluid into the seal chamber). 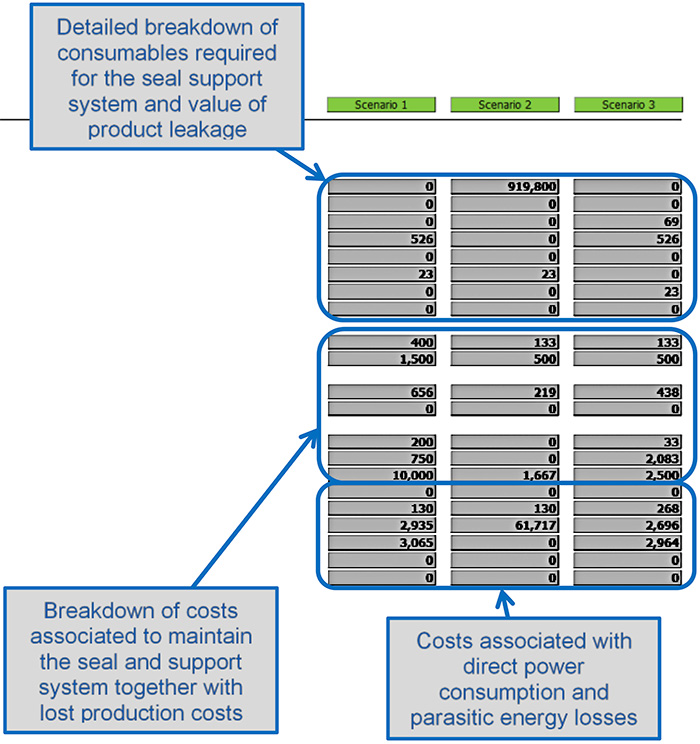 Using the default values in the LCC calculation tool and making some minor adjustments for this example, we can make a quick comparison of the three available scenarios.

The heat exchangers used in Scenario 1 and 3 are changed to water-cooled heat exchangers, so the seal support system will require water. Kerosene is selected for the Plan 32 injection fluid for Scenario 2, and the injection fluid value is increased. The value of the pumped fluid is also increased. Because this pump is considered critical, $5,000 per failure is selected to represent the impact to production in the event of a seal or system failure.

The pumping conditions and the expected mean time between failure (MTBF) are then added. A reduced MTBF for Scenario 1 is selected because the performance of the heat exchanger is expected to deteriorate over time as a result of the large heat load placed on it. The MTBF for the heat exchanger is also modified to match that of the seal, assuming the cooling coils require cleaning on a regular basis.

The purchase costs for the seal support systems are added. Scenario 1 requires a heat exchanger, stand and interconnecting piping. Scenario 2 requires interconnecting piping, instrumentation, as well as pressure and flow-controlling valves. A closed-loop barrier fluid circulating skid is selected for Scenario 3 with a significant initial investment of $50,000.

The results give a detailed breakdown of the annual operating costs, including the costs of parasitic losses. In this example, there is a significant difference in the one-time costs of the sealing solutions (see Figure 1). That difference is considered along with the operating costs over the projected life expectancy of a particular pumping asset. The resulting total estimated LCC suggests a different selection. The scenario with the highest initial cost turns out to be the one with the lowest LCC. The tool also provides a summary of the energy requirements and the carbon footprint of each solution.