Nearly every commercial and industrial facility in the world pumps water. Pumping cold, lubricating water is normally straightforward and only requires standard materials seals and lower-pressure components. However, as water is heated, its properties drastically change, and the pump specifications should change as well.

Weight and viscosity continue to decrease as the temperature increases. Above the sea level atmospheric boiling temperature of 212 F, the pressure to maintain water as a liquid increases dramatically (see Figure 1). 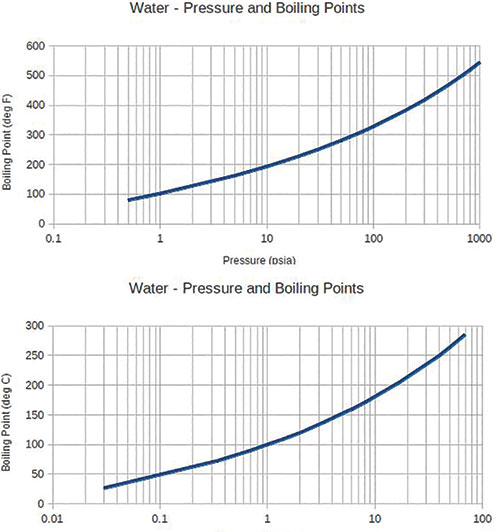 The Effect on Pumps

The net positive suction head available (NPSHA) should be checked before pumping any liquid, especially hot liquids. Centrifugal pumps require that all incoming streams be in liquid form, so the liquid must not reach its vapor pressure. In most water systems with temperatures higher than 212 F, the water in a vessel or boiler is in a state of equilibrium—the pressure at the water’s surface is the same as the liquid vapor pressure. At the pump suction, the only energy keeping the water liquid is the vertical head measured from the liquid surface to the centerline of the pump impeller. Worse, some energy is lost because of friction in the suction piping.

The available energy is best expressed as NPSHA, which is the difference between the pressure at the pump suction nozzle and the liquid vapor pressure.

Where:
Pa = pressure at the water surface in psia
Pv = vapor pressure for the fluid at the given temperature in psia
He = difference in height from water surface to the pump suction centerline in feet
Hf = suction line friction loss in feet
SG = specific gravity of the fluid

Hot water systems tend to have low NPSHA, which puts them at risk for cavitation at the suction eye of the impeller. As the liquid accelerates through the suction pipe, pressure drops. Bubbles will form as the liquid drops toward its vapor pressure.

After the bubbles enter the impeller eye, the pressure begins to increase and the bubbles collapse. The collapsing bubbles produce tremendous localized pressures on the impeller’s surface and remove small amounts of metal. The tiny abrasions occur constantly as the liquid moves through the pump and, over time, will severely reduce the structural integrity of the metal. When pumping water, cavitation typically sounds like rocks hitting the impeller (see Image 1).

A 316 stainless steel (SS) impeller has greater resistance to short periods of minor cavitation and should be considered when the difference between the NPSHA and NPSHR is less than 2 feet. However, this impeller cannot make up for inadequate NPSHA.

Many pump users do not realize that pump manufacturers’ NPSH details are not guaranteed unless an NPSH test is purchased for a specific operating condition. An NPSH test can confirm the performance and is strongly recommended when NPSHA is less than 4 feet greater than the pump’s NPSHR.

After determining the NPSHA, the end user should consider the additional effects of hot water on pump performance.

Most centrifugal pumps can handle water temperatures up to 250 F. At temperatures above 300 F, pumps and piping systems start to expand dramatically. The American Petroleum Institute (API) Standard 610 recommends that pumps in this temperature range and above should be designed with centerline-supported casing. This design feature allows the pump to thermally expand from its center of rotation, keeping the rotating components on the same axis with the pump casing. The pump casing can expand freely without being fixed vertically to the pump base. The centerline-supported casing significantly reduces the pump alignment problems of foot-mounted casing designs.

The pump casing, bolts and flanges should be designed to withstand 150 percent of the pump’s working pressure:

For a centrifugal pump, the lower density of hot water reduces the horsepower required for a given flow and head. The resulting reading on a pressure gauge will also be reduced because the column of liquid weighs less and the resulting pressure is lower.

The lower viscosity at higher temperatures reduces the film thickness between the mechanical seal faces, leading to more friction and less lubrication. This is compounded by the increased internal working pressure, which forces the seal faces together. As a result, sealing becomes more difficult as the temperature of the liquid rises.

As water is heated, the vapor pressure at higher temperatures will significantly increase system pressures. Sealing the hot water becomes a challenge as the difference between the stuffing box and atmospheric pressures increases. Seal failure will allow the hot water to escape at high pressures, creating a dangerous environment.

A balanced mechanical seal is required for temperatures higher than 220 F. An unbalanced seal may be used for temperatures lower than 220 F. For an unbalanced seal, one face’s material should be a special hot water carbon (Code P66 or F48), and the other face should be tungsten carbide (Code 015) or silicon carbide (Code 58). The static seals should be elastomeric O-rings, although elastomers do not perform at their normal temperature ratings in hot water.

The recommended maximum temperature limits for hot water applications are 250 F for Viton, 280 F for Ethylene Propylene, 350 F for Aflas and 400 F for Kalrez.

The most common mechanical seal recommended for high-temperature water has Aflas elastomers, hot water carbon versus tungsten carbide seal faces and 316 SS hardware. The seal chamber should be cooled if temperatures rise above 250 F.

A seal chamber cooling jacket, though helpful, will not be adequate. A cooled flush over the seal faces should be considered. 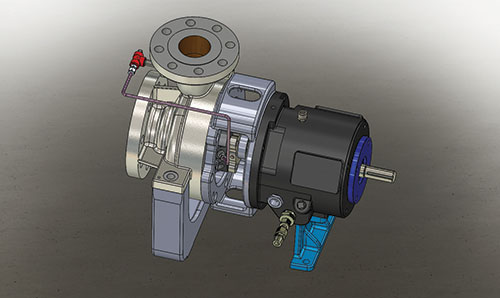 For temperatures below 250 F, a flush line routed from the pump’s discharge to the flush connection in the seal gland plate can remove the heat generated by the seal faces. For temperatures above 250 F, a heat exchanger—either American National Standards Institute (ANSI) Plan 7321 (API Plan 21) or ANSI Plan 7323 (API Plan 23)—is highly recommended. The heat exchanger must reduce the seal area temperature to about 160 F. Without a cooled flush, the liquid film between the seal faces will begin to flash. As the seal faces begin to run dry, the seal prematurely fails.

The ANSI Plan 7321 (API Plan 21) includes a flush line from the pump discharge through a heat exchanger and into the connection of the seal gland plate to flush the seal faces. The flow is controlled through an orifice, with the size determined by the differential pressure produced by the pump. 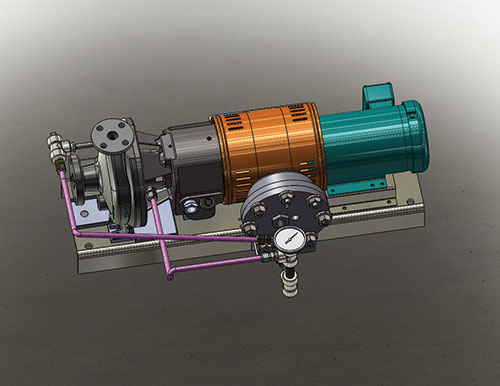 The ANSI Plan 7323 (API Plan 23) is a flush line from the seal chamber through a heat exchanger and back into the seal flush connection on the gland. This plan requires that the mechanical seal be equipped with a pumping ring to circulate the water through the heat exchanger. The advantage is that the heat exchanger cools water from the seal chamber, which has already been cooled by the jacket. The disadvantage is that it requires a pumping ring, which works poorly at slow speeds. 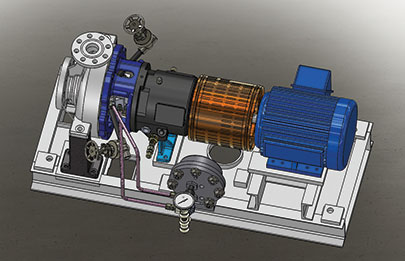 These seal plans should be furnished with a thermometer and a needle valve located in the flush line between the cooler and the flush connection on the gland. Cooling water flow to the seal should be in the range of ½ to 1 gallon per minute, and the temperature should be near 140 F. Cooling water flow to the heat exchanger should be between 7 and 15 gallons per minute, depending on the heat exchanger. The needle valve allows close regulation of the flow. 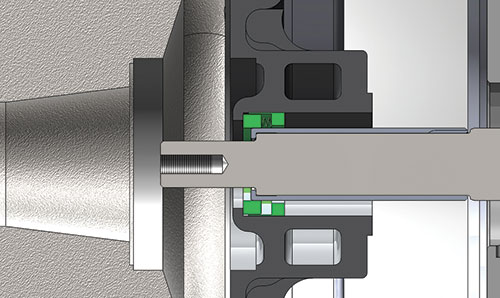 Adding a filter to ANSI Plan 7321 (API Plan 21) is highly desirable. A seal system consisting of a flush line from the pump discharge through a heat exchanger and then through a filter before returning to the flush connection in the seal gland plate offers an extra level of seal protection. This will filter out the welding slag, rust and scale common in most new hot water systems. It also cleans up an older system that may have scale. If the water has solids in solution, when cooled, they will precipitate or settle out and then filter in during flow. The seal system prevents solids from entering the seal chamber. These seal systems are furnished with a needle valve and thermometer. 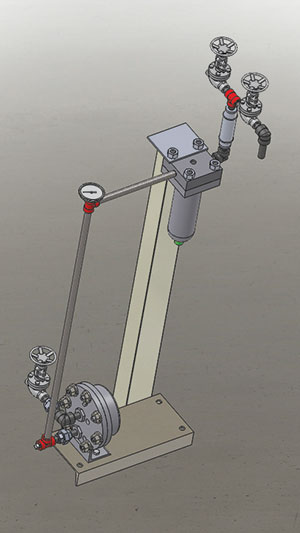 Cooling the bearing frame is not necessary for hot water applications. Excessive cooling of the bearing frame may lead to early bearing failure from moisture condensation and contamination of the lubricating oil. This process is required only for services in which pumps are used in temperatures above 500 F.

Hot water pumping does not have to be a problem. Careful selection of the pump, mechanical seal and seal cooling system, and the piping system will help prevent system damage and other problems. As long as end users are aware of water’s changing properties as temperatures increase, the right planning can prevent injuries and reduce equipment failure.

Rick Ross is the president of R. A. Ross and Associates Inc., a pump and specialty representative and distributor based in Louisville, Kentucky. He holds a BSME and has spent 39 years working with difficult pump, mechanical seal and other process applications in the Ohio Valley. Ross may be reached at solutions@raross.com or via the website raross.com.

The author would like to acknowledge Brian Schnelzer, operations manager, Ceco Environmental, Met-Pro Global Pump Solutions (Dean Pump), for his contributions, including the article images and some technical details.