Learn the ins and outs of these rotating machinery components.
by Scan DeCamillo
Kingsbury Inc.
08/07/2018

Bearings support the rotor in industrial rotating machinery, transferring loads from the rotating components to the stationary casing.

Hydrodynamic bearings work by floating the rotating components on a thin film of fluid and are often referred to as fluid film bearings (see Image 1). The separation of the rotating and stationary surfaces results in very low friction and negligible wear, giving the hydrodynamic bearing an exceptionally long life—in many cases equivalent to the life of the machine. 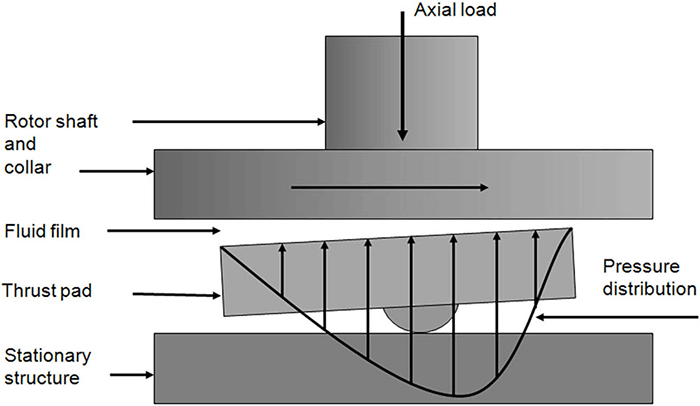 The most basic type of hydrodynamic journal bearing is simply a cylindrical bushing with two axial grooves to channel fluid to the bearing surface. 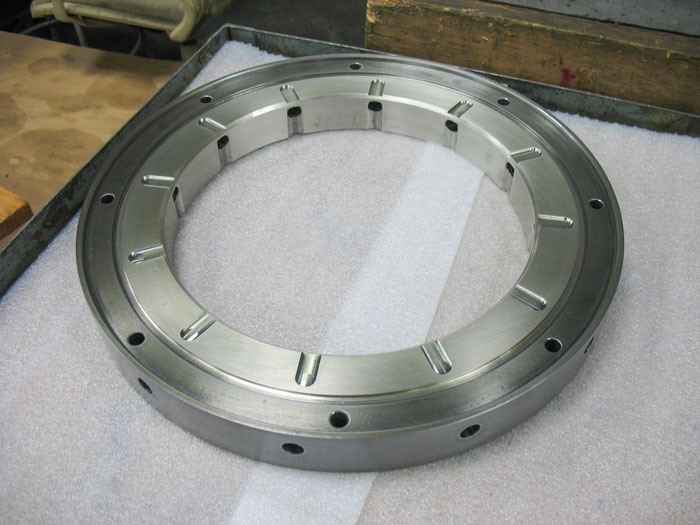 The cylindrical journal bearing is suitable for a wide range of operating conditions but is eventually limited by speed due to a vibrational instability called whip. Variations in the bore profile improve the speed capability, measured in meters per second (m/s) in Image 2, giving rise to various types of fixed geometry journal bearings referred to as elliptical, offset and lobed. The tilt-pad journal bearing is not a fixed geometry bearing but rather is composed of individual pads that are free to tilt. The tilting pads allow stable operation to very high speeds. 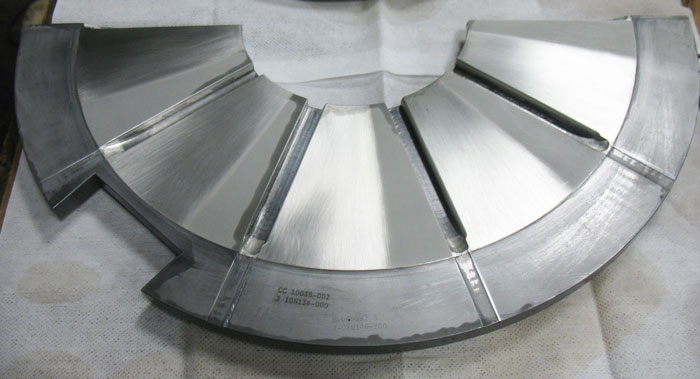 There are three basic types of hydrodynamic thrust bearings used in industrial rotating machinery. The flat-land bearing is the simplest design, formed from a washer-shaped plate with radial grooves to channel fluid to the bearing surface (see Image 3). The flat-land thrust bearing has very little load capacity and is mostly used as a bumper for momentary load reversal. 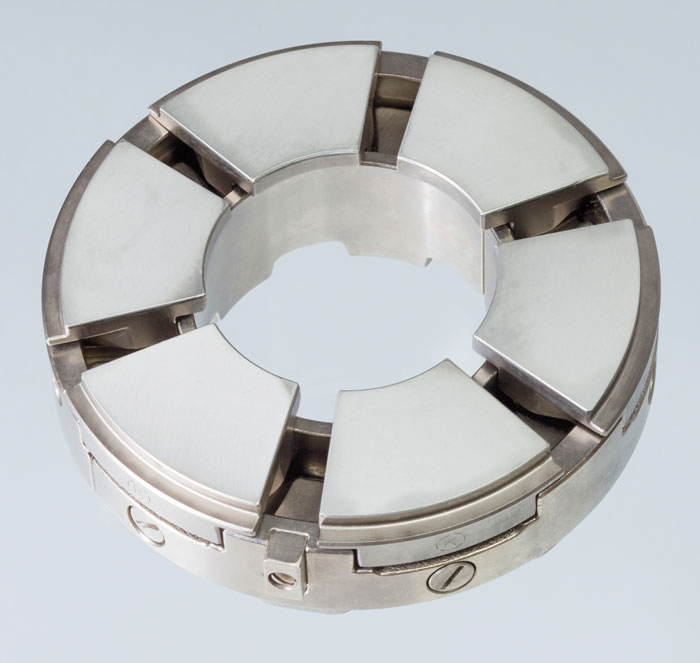 The tapered-land bearing is similar in design except that slight tapers are machined on the lands, which provide substantial load carrying capability (see Image 4).

Hydrodynamic thrust bearings that incorporate individual segments with pivots (see Image 5) are referred to as a pivoted shoe, tilt-pad or pivoted pad thrust bearing. The pivoted shoe thrust bearing is capable of adjusting to changes in operating conditions and has the highest load capacity of the three. 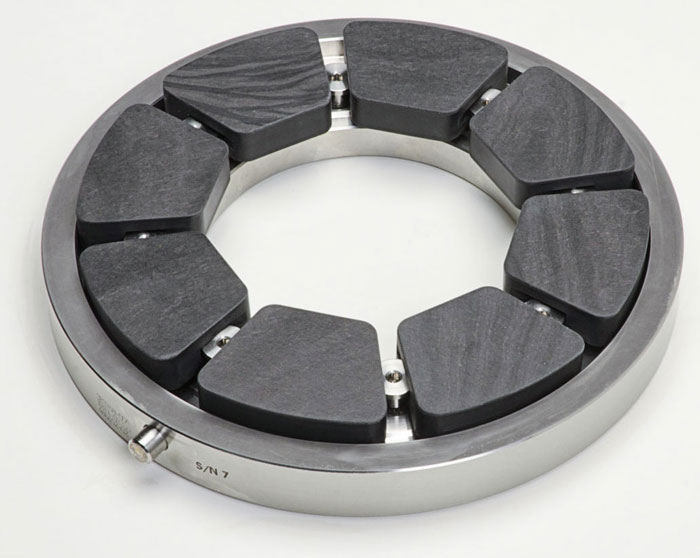 The hydrodynamic film forms with shaft rotation, so an appropriate fluid must always be present during operation to keep the bearing and rotor surfaces separated. If the fluid flow is lost or interrupted during operation, the bearing surface will come in contact with the shaft and be damaged.

The fluid used in most hydrodynamic bearing applications is a mineral oil or synthetic lubricant. The bearing components are typically steel with a layer of a soft tin alloy called Babbitt, bonded to the bearing surface, which helps protect the shaft from damage.

In vertical applications, the bearings are submerged in a pot of lubricant with cooling coils to remove the heat generated by shear of the lubricant in the oil films. For low speed horizontal machines, the lubricant may be supplied by rings or discs that spin with the shaft, dip into a sump and distribute lubricant through passages to the bearings. A tremendous amount of heat is generated by the films in higher speed units and external lubrication systems are required to provide sufficient flow and cooling capacity.

Pump applications allow two unique options compared to other rotating machines. The relatively low speed makes it possible to use a self-contained bearing system in some applications instead of a more expensive external lubrication system.

One dual bearing thrust/journal system, for example, consists of flange mounted casings that contain pivoted shoe thrusts and cylindrical journal bearings, a sump, a heat exchanger and an oil circulator.

This option is ideal for remote locations where electricity or cooling media are limited. Another option in some applications is to design the pump to use the process fluid as the bearing lubricating media using suitable hydrodynamic bearings. Image 5, for example, is a hydrodynamic pivoted shoe thrust bearing with polytetrafluoroethylene (PTFE) composite pads used for diesel fuel processing applications.

The key considerations in the design and operation of hydrodynamic bearings are film thickness and bearing temperature. The film thickness in industrial hydrodynamic bearing applications is on the order of a thousandth of an inch and governs the manufacturing requirements of the shaft, collar and bearing surfaces. A high degree of precision is required of the components to ensure successful operation and life.

The criteria for load capacity in low speed applications is the minimum oil film thickness, which decreases with increasing load. In practice, load capacity is set to achieve an operating film thickness that is larger than the filter size so that the small particles that pass through the filter do not score and damage the bearing surface.

Hydrodynamic films become thicker at higher surface speeds, which would allow higher loads, but friction also increases and temperature becomes the limiting factor. The mechanical and thermal integrity of the bearing materials and the thermal limitations of the lubricant determine the load capacity in high speed applications.

In critical applications, the bearings are instrumented with temperature detectors to monitor the health and integrity of the bearing.

Vibration characteristics are another key consideration in design and application of the journal bearings.

The stiffness and damping properties of the journal bearings influence the critical speeds and vibration levels of the rotor.

The journal bearing type, geometry, clearances and additional factors are design parameters evaluated to ensure that the dynamic response of the rotor satisfies appropriate specifications.

Scan DeCamillo, manager of research and development at Kingsbury Inc., is responsible for design, analysis and development of fluid film bearings for industrial and military applications. DeCamillo received his B.S. in mechanical engineering from Drexel University in 1975. He may be reached at sales@kingsbury.com. For more information, visit www.kingsbury.com