The Basics of Spectral Resolution for Motor Vibration Analysis

Revisiting the fundamentals of data examination, time and resolution can solve equipment issues before they happen.
by Mike Fitch (LUDECA, INC.)
09/19/2014

Inexperienced vibration analysts encounter a common problem: They are often expected to learn too much, too fast. Instead of taking time to appropriately understand the basics, new analysts must often move directly to a busy schedule of collection and analysis without much apprenticeship. Training is almost always in a group setting, and instructors often move too quickly through the material. The facts are learned well enough for an analyst-level exam, but an in-depth understanding is often taken for granted.

Accurate vibration analysis requires complete clarity on foundational subjects. Real-world applications demand more of young analysts than what they can learn in group training. Facility operations depend on a whole picture of how their equipment moves and where energy is used—and lost.

Good data requires correct placement of the proper transducer. The data collector must be properly configured to collect the necessary maximum frequency in the spectrum (fmax) and resolution of data.

A data collector device is only as good as its user. It will only do what the analyst tells it to do. Many companies buy data collection equipment without understanding this fact. That is why they spend thousands buying the equipment, but spend little training its user.

The most basic objective for an analyst in training is to obtain data that will reveal the probable defects in a particular machine and have enough detail to discriminate between them. The data must include a high enough fmax to capture the data and reveal the faults that cause higher frequency vibrations. At the same time, it must have enough resolution to reveal the true cause of the fault or defect.

The spectrum in Figure 1, taken at the inboard horizontal of a motor, shows many multiples of turning speed, which indicate looseness.

Figure 2 magnifies the 1× to 3× peaks. Unsurprisingly, it shows the 1× with multiples.

Figure 2. A magnification of the 1x to 3x peaks

Figure 3 shows a higher-resolution fast Fourier transform (FFT) analysis taken without moving the sensor. The 1× peak remains prominent with its multiples, but more data are shown in the skirts of these peaks. 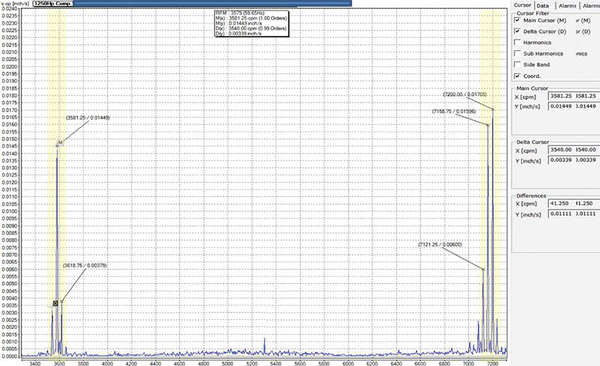 Figure 4. A zoomed-in view of the higher-resolution FFT analysis

An analyst with access to only the lower-resolution fft might look at the harmonics of 1× and conclude looseness. The analyst might decide to trend it because all the amplitudes are low or, more likely, write a work order to repair the looseness. The real problem of cracked rotor bars would go undetected and only get worse.

Eventually, a rotor bar fragment would fly out during rotation and rip apart the stator of an expensive 1,250-horsepower motor.

Analysts can fundamentally understand resolution by relating it to time. Higher-resolution data takes more time. Figure 5 is a 0.5-second time waveform (twf). Remember, 500 milliseconds equals 0.5 seconds. This twf is used to calculate the lower-resolution fft analysis in Figure 1. Equation 1 may be used to find the resolution, but looking at it purely from a time perspective gives a better idea of its simplicity.

The two red x’s represent cyclic vibratory events that have a frequency of one second, or 60 cpm. The half-second of data collection completely missed the 60-cpm events. Even if it included one event, that would not have been enough for the fft analysis to calculate it properly.

This, in essence, is resolution. A signal processing engineer cannot create an algorithm to deal with incomplete data. More time must be given to collect a complete set of data—in this case, more than one second for 60 cpm of vibration data.

A minimum of two events are needed to display this vibration confidently in an fft. One second of data provides a maximum possible resolution of 60 cpm because, in 1 minute, 60 one-second cycles occur.

Equation 1 can be solved for R, showing that resolution is inversely proportional to time. Substituting the values from the example into Equation 1, the time of 0.5 seconds provides a resolution of 2 hertz—or, to convert to cpm, multiply by 60 for a resolution of 120 cpm.

What about fmax and lines of resolution (LOR)? The resolution was determined by dividing time by one. However, most data collectors and software do not allow the user to specify fmax and resolution. An analyst needs to know that fmax divided by LOR equals the maximum possible resolution (see Equation 2). Remember, the lower-resolution fft had an fmax of 384,000 cpm and 3,200 LOR. 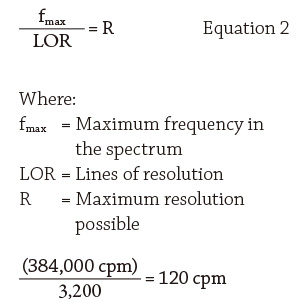 An fft connects the dots between LORs, where each line is a dot of data. Figure 7 shows a zoomed-in view of the 1× of the lower-resolution fft. Each LOR is a bin of data—one number representing an average of the vibrations recorded at that frequency. The number represents a dot in the center of that bin. The software draws the fft without showing the dots. 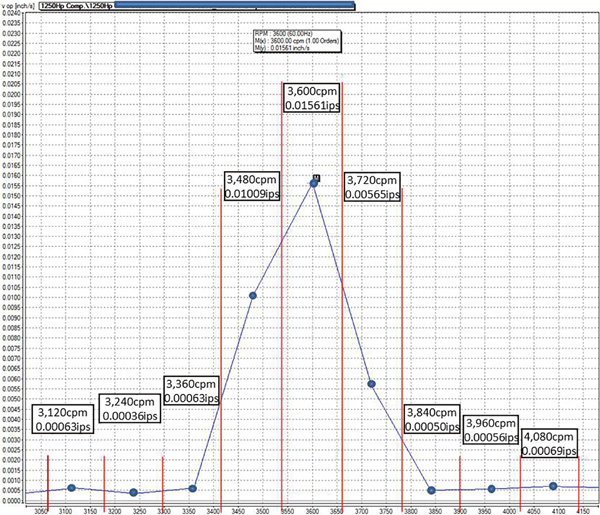 Figure 7. A zoomed-in view of the 1x peak of the lower-resolution FFT

The fmax represents the entire fft—the higher the fmax, the larger the palette from which the spectrum is drawn. The number of lines of resolution represent the number of dots available to draw out the detail of the fft. A higher fmax requires more dots for better detail. High resolution and fine detail are often necessary to diagnose different and more complex faults.

Mike Fitch is a vibration application engineer for LUDECA, INC. He is a former Divisional Reliability Champion for a Fortune 500 company and a certified category III Vibration Analyst. He may be reached at mike.fitch@ludeca.com or 305-591-8935.