Basics of System Alignment vs. Balancing

Differentiating between misalignment and imbalance is essential to identifying the cause of pump failure.
by Larry Ketola
Hines Industries
06/06/2019

Alignment is when all pump, driver and coupling centerlines fall within the same centerline. Misalignment occurs when the centerlines are offset or angular from each other. Balancing is the act of redistributing the mass of a part so that the mass is evenly distributed around the part’s rotating axis. Imbalance occurs when the mass center axis is not aligned with the geometric axis. The mass center is the midpoint that the assembly tries to rotate around naturally. The pump impeller would spin around this axis if it were thrown spinning through the air.

The farther these two centerlines are apart, the more imbalance an assembly will see. The end result of balancing is to align the mass center with the geometric axis.

Pump and drive shafts must be aligned in order for the assembly to be in alignment. A user must start with a good pump, driver and coupling in order to dynamically balance an assembly.

Any components that are not dynamically balanced can result in accelerated seal and bearing failure. Once bearing failure occurs, the pump assembly will need to be rebuilt. 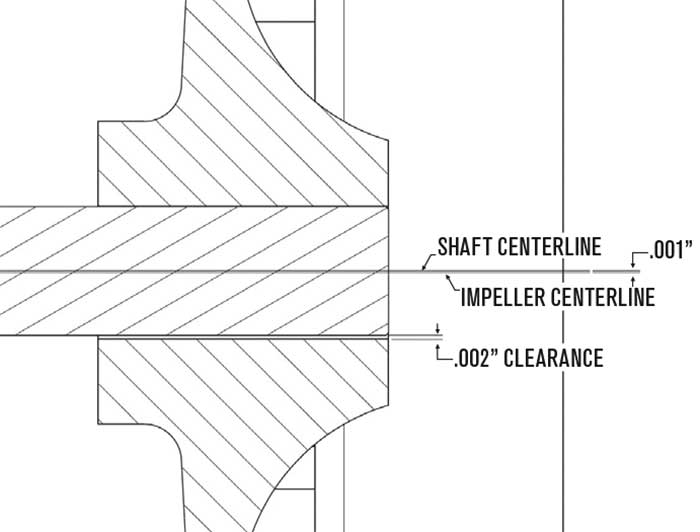 Lasers and dial indicators are used to measure the runout of components and verify alignment. In the typical pump assembly shown in Image 1, the pump should be considered the baseline because it is usually hard piped and securely mounted to its base.

All other components should be aligned to the centerline of the pump. Even with the shafts aligned, an imbalance of the rotating assembly can occur with a bad coupling. 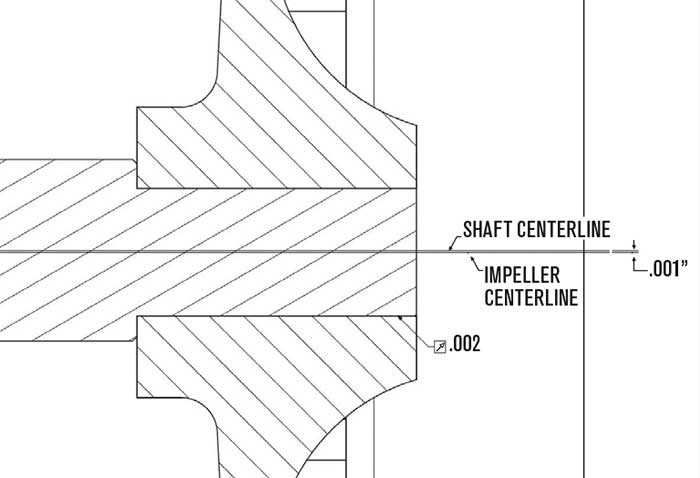 The force created by imbalance increases exponentially with speed. Tolerances for imbalance are set with operational speeds in mind. 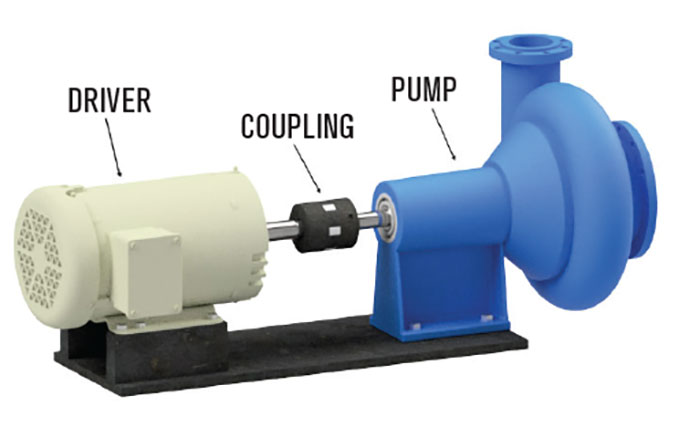 Two plane or dynamic imbalance is the unbalance as measured on two separate planes. Both planes will be perpendicular to the axis of rotation and thus parallel to each other. It is the vector sum of force and couple imbalance. A two plane balance is required for impellers with the D/B ratio less than or equal to 6.

Single plane imbalance requires only one correction. The amount of unbalance is the weight times the radius. This type of imbalance is a vector, and therefore, must be corrected with a known weight at a particular angle.

To correct for two-plane imbalance requires two unrelated corrections in two different planes at two unrelated angles. The specification of imbalance is only complete if the axial location of the correction planes is known. Two-plane imbalance specifies all the unbalance, which exists in a workpiece. This type of imbalance can only be measured on a spinning balancing machine that senses centrifugal force due to the couple component of unbalance.

The allowable imbalance for an impeller is based on ISO 1940 Grade G6.3. Permissible residual imbalance is a function of balance quality grade (G) number, rotor weight and maximum service speed of rotation. Instead of using the graph to look up the specific imbalance value for a given G number and service revolutions per minute (rpm), and then multiplying by rotor weight (taking care to use proper units), U can be calculated by using one of the following in Equation 2.

When rebuilding pumps, several things need to be looked at to define the root cause of imbalance:

To achieve an acceptable balance assembly, all three of the above should be addressed.

There are many benefits of balancing and aligning pump assemblies:

Proper alignment and component balancing are essential for having an efficient, high-performance pump.