The Benefits of Using Dry Gas Seals to Pump Liquids

This unconventional solution features bonding consisting of a micro-crystalline layer that has attributes of natural diamond.
by Emery Johnson
04/21/2016

Houston, Texas, gets hot during the summer, with temperatures exceeding 95 F (36 C) in August and 90 F (33 C) for an average of 102 days a year. While air conditioning helps to make life tolerable during Houston's hot, humid days, there is no such relief for pipelines that are pumping oil and gas products.

Keeping pipeline components in optimal condition is a constant challenge for oil and gas companies that must contend with the effects of rising temperatures on liquid pump seals.

Recently, one company solved a similar problem with the seals on its ethane pumping system by incorporating a dry gas seal in a liquid-pump application.

The end user, located in Houston, operates natural gas liquid (NGL) fractionation facilities, where it processes mixed NGL streams into purity NGL products including ethane, propane, normal butane, isobutene and natural gasoline. A crucial part of its operation is the ethane injection pumps that pump ethane from 410 pounds per square inch (psi), or 28 bar, to about 1,100 psi (76 bar).

While the ethane temperature at suction should be approximately 60 F (16 C) on a typical warm, Houston summer day, this temperature can increase dramatically. The increased temperatures result in seal failure, which can cause ethane to vaporize—resulting in product loss.

When operating rotating equipment, some end users do not pay enough attention to transient conditions. Startup, slow-roll and standby pump conditions must be evaluated to ensure proper sealing fluid is being supplied to the seals at all times. 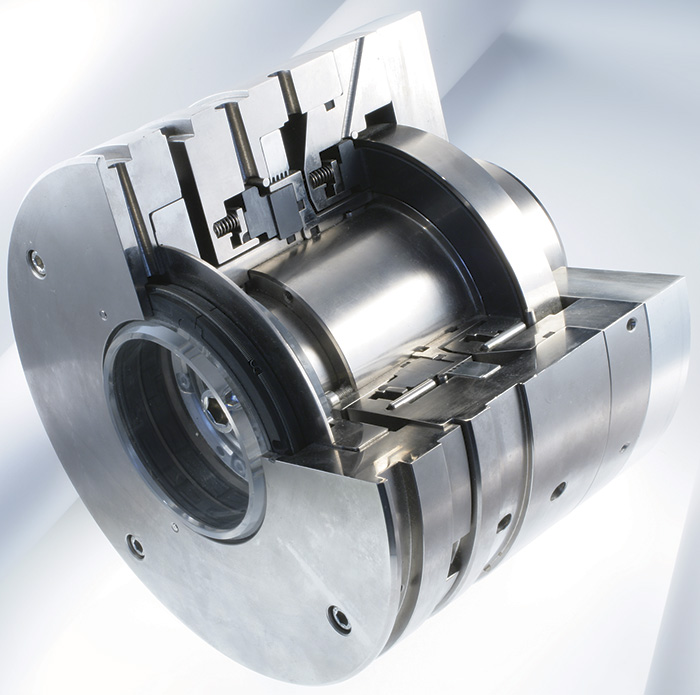 Here is what to look for when evaluating proper liquid seal function, highlighting some problems that can occur:

Other transients that play a role in evaluating sealing fluid are temperature changes in the product, frequent starts and stops, and operator error. These situations can lead to seal failure. At the Houston facility's ethane pumping operations, mean time between failure (MTBF) was averaging a little more than three weeks. Something needed to be done to prevent seal failure and product loss.

Low vapor margin applications, such as ethane, have one thing in common: The liquid would rather be a gas. For this reason, many end users incorporate liquid-lubricated gas seals. The manufacturer that supplied the seals for the facility in Houston, for example, offers pump seals that run on a gas film between the faces—either a dual pressurized seal using an inert gas or a dual unpressurized seal with the outboard seal operating on a gas. A dual unpressurized seal works great in these applications, but transients and other unknowns can cause problems. Incorporating a clean gas at the seal faces helps prevent failure, but certain problems can persist.

When the manufacturer was evaluating these challenges, the Houston facility's initial solution was to use liquid-lubricated seals and take discharge pressure directly into the stuffing box. But the liquid-lubricated seals continually failed, especially on warm summer days as the outside temperature rose. The reason had to do with the inherent nature of ethane

Liquid-lubricated seals work best in environments where the temperature and pressure are at a consistent level. For this end-user's operations, it was the transient conditions that caused the problems.

For this application, ethane was sealed. For ethane to become a gas, it needs a pressure drop or a vapor pressure increase above the sealing pressure. Heating the fluid is a quick way to achieve this, but using an external heater adds complexity and maintenance. Using a close-clearance, multi-tooth labyrinth on the front end of the seal causes the turbulent flow during operation to create fluid friction that will build heat. The rotation of the seal faces also adds heat. The closer the gap is between the faces, the smaller the leakage and the higher the heat generation. But the transient conditions caused problems. Relying on rotation to build heat ignores the effects of startup, slow-roll and the standby pump.

The solution—a dry gas seal—was simple, though a bit unconventional. This technology is usually not used in liquid-pump applications, but it seemed to be a good solution because the ethane liquid wants to be a gas.

Dry gas seals delivered enhanced reliability in operating modes where the seal faces are in constant contact—turning, ratcheting, coast-down and other operating modes that create critical conditions for standard gas seals. Experience has shown that unexpected operating situations, such as the transient conditions the end user was experiencing, can compromise a gas seal.

Because seal faces are designed primarily for non-contact operation, they are subject to wear when there is contact for sustained periods. This can cause seal failure resulting in downtime and production loss.

These seals featured bonding that consisted of a micro-crystalline layer that has attributes of natural diamond. For example, it will not flake or chip off, the coating is extremely hard and wear-resistant, and it offers excellent heat conductivity and high chemical resistance. These dry gas seals can be ideal solutions for extreme operating conditions. They can extend the recommended repair intervals for mechanical seals to at least five years.

This technology also provided simplification of the sealing system. In this application, the liquid ethane is very clean. It is typical to filter the ethane prior to injecting it back in the seal area; otherwise, there is a risk of damage to the dry gas seal faces. A filter flush can increase the stuffing box pressure, which increases the vapor margin and makes it more difficult to vaporize the liquid.

Instead of using a flush, if some particles were in the liquid, the special bonding would either crush them, or if they are small enough, the special dry gas seal groove pattern would pass them along. No filters were needed, which reduced maintenance costs and downtime.

The dry gas seals were installed in July 2011. After several months, plant operators reported that they had seen at least an 83 percent reduction of the ethane to their flare system. Today, it is above 90 percent.

Eight months into operation, the end user took the pumps out of service for an impeller re-rate. The seals were removed and transported to the manufacturer's facilities for a teardown and inspection. When the seals were opened, the faces looked new. The components were cleaned, and the seals were tested. The leakage rates were slightly lower than what was originally recorded. The end user decided to install the seals back into their pumps and run them without repair. Currently, the seals are still running with no issues.

This technology is being used in more types of services with different light hydrocarbons and in a carbon dioxide application. 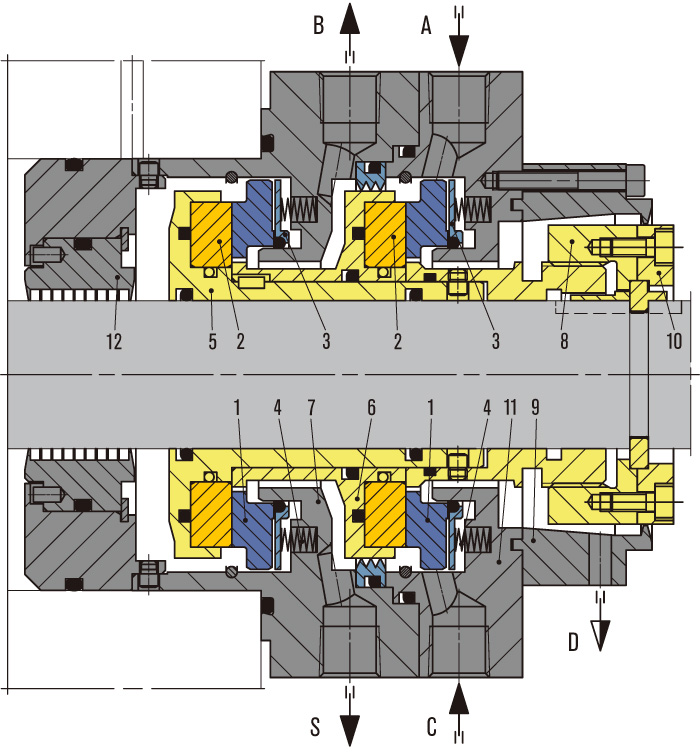 The details of this seal include: GBI is gas buffer inlet, GBO is gas buffer outlet and D is drain. The yellow parts are rotating, blue are stationary, and gray represents pump shaft and housing.