According to the U.S. National Electric Code NFPA70, Article 100B, an effectively grounded scheme is one that is intentionally connected to earth through a ground connection or connections of sufficiently low impedance and that has sufficient current-carrying capacity to prevent the buildup of voltages that may result in undue hazard to connected equipment or to persons.

Grounding of a non-linear drive system is done for two basic reasons: safety and common mode noise containment or reduction. With the advent of power electronics used in products ranging from personal computers to variable frequency drives (VFDs), harmonic noise containment has become even more important.

A good grounding system is an integral part of any electrical system. Older, linear systems were designed around the linear relationships between voltage and current. However, the proliferation of solid-state power supplies that take in incoming alternating current (AC) power, rectify it to direct current (DC), then reconstitute it at varying voltage and current ratios at different frequencies, called nonlinear systems, presents some new challenges for a typical ground scheme. The byproducts of these nonlinear systems are the production of significant harmonic distortions, voltages and currents on a system and, when referenced to ground, are described as common mode noise (CMN). CMN can have deleterious effects on some mechanical components such as bearings and electrical and control systems on the same ground bus. 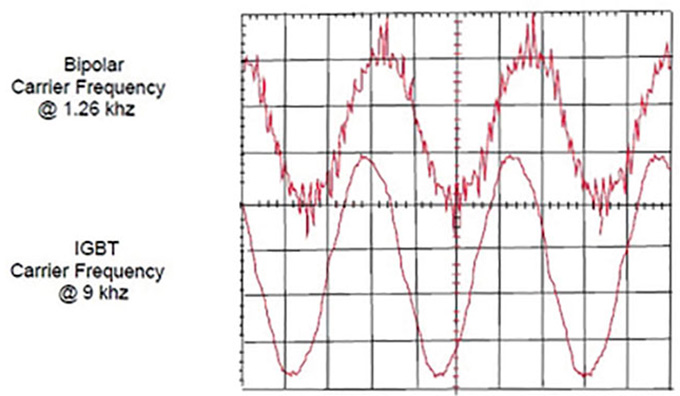 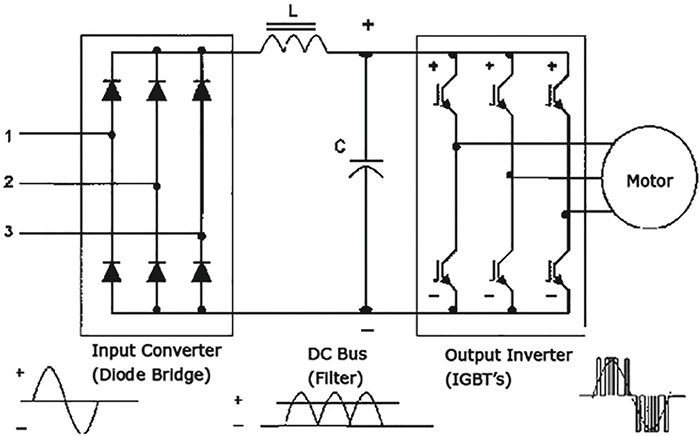 These reliable methods are still in use. But with the growing emphasis on improving operating efficiency, the inherent inefficiency of traditional methods is driving users toward VFDs. Because the head and flow rate of the pump can be regulated by controlling its rotating speed, the VFD controlling the drive motor speed gives operators a wider operating range, allowing the tailoring of the pump's output to the system's requirements, which can increase the system's overall pumping efficiency.

Developed by Nikola Tesla in 1924, the induction motor can be directly connected to an AC three-phase power source. The motor speed is directly proportional to the applied frequency. For example, a two-pole pair motor with no load operating on a 60-Hertz (Hz) system would rotate at 3,600 revolutions per minute (rpm). However, the same two-pole motor operating on a 50-Hz system would rotate at 3,000 rpm. Therefore, by controlling the frequency of the supplied power to the motor, the motor's speed can be controlled.

Until 1968, when Danfoss introduced their VLT5 frequency converter, the most widely used method of providing an AC induction motor with variable frequency was using a speed-controlled DC motor turning an AC generator to produce the desired AC frequencies. Although this system is effective enough to control the speed of the motor within a few rpm, it is expensive to operate and has inherent inefficiencies. By comparison, the VFD can vary the power and frequency to the motor, but with greater flexibility and fewer moving parts.

Because of the continuously increasing capabilities of solid-state power electronics, the pulse width modulation (PWM) VFD is becoming the drive of choice. It can work with motors that range in size from fractional to thousands of horsepower. It can also couple reliably, offer affordability in cost per horsepower and deliver measurable electrical energy savings.

The PWM-VFD is the current state-of-the-art method used to control frequency and power. VFDs generate AC current by sequentially switching the DC current in alternating directions. The latest solid-state electronic switches, insulated gate bipolar transistor (IGBT) and the newer integrated gate-commutated thyristors (IGCT), have increased the switching speeds five to 10 times over the older bipolar junction transistor (BJT). The faster the switching, the smoother the current sine waves to the motor. That switching generates significant amounts of CMN that must be contained and dissipated by the power and ground systems. To keep these stray currents from damaging or interfering with system components, the ground grid must provide a low impedance path for CMN currents.

A power equipment (PE) ground (protective earth) terminal usually serves as safety equipment ground for AC and DC drives. The CMN currents are replete throughout the entire VFD circuit (shown in green in Figure 3), and any ungrounded components can accumulate electrical charges because of current leakage that results in voltages greater than the recognized safe touch potential of 50 volts (V). The direct path of CMN currents between the drive and motor frame is shown in red in Figure 3.

The lack of direct connection between the drive and motor frame is typically the reason for the inducted voltages in excess of the acceptable National Electrical Manufacturer's Association (NEMA) standard of 300 millivolt voltage on the motor shafts. This problem is also the primary cause of bearing damage in motors that are not equipped with means to resist or shunt the CMN currents from the motor.

The true earth (TE) ground loop is the most familiar ground system. All structures have it primarily for safety because a short circuit in an ungrounded system could be fatal. Commercial building structure steel is usually the best connection for zero voltage TE potential because girders are connected in a low impedance grid pattern that has multiple column paths into ground. In most private homes, ground connections are established by bonding to copper water piping or embedded ground rods.

However, installing a VFD system and relying solely on the TE ground may be problematic. Depending on the impedance (resistance to AC current), some higher-frequency CMN currents may not pass back to the drive and build up voltages above the safe touch potential of 50 V. The stray CMN currents can cause damage to anything in the VFD circuit.

Jay Marchi is a 1985 graduate of Pennsylvania State University with a Bachelor of Science degree in electrical design engineering technology. Marchi is employed by ProPump Services, an engineering and diagnostic consulting firm located in Bethlehem, Pennsylvania. Marchi is a specialist with more than 26 years of experience in rotating equipment diagnostics and system analysis.