A great innovation in compression packing was the development of a new material class by Ritchie Snyder of W.L. Gore & Associates in 1981. He envisioned a single material that would allow for broad standardization across a wide range of applications. It would deliver the chemical compatibility of polytetrafluoroethylene (PTFE) and graphite, with the mechanical strength of the then newly expanded PTFE material (ePTFE).

Over the next 35 years, many pulp and paper, chemical, mining and power companies have standardized their plants with this new material class of ePTFE/graphite packing fiber.

Prior to this breakthrough, end users working in chemical applications had one option for standardization: a natural mineral fiber known as asbestos, which was effective because of its chemical inertness and high temperature rating.

By the late 1970s and early 1980s, however, it was actively being eliminated from the market because of health concerns. As an alternative, pure PTFE was substituted, but it was a poor replacement because of its inherent creep, mechanical weakness and high coefficient of thermal expansion.

It was also a heat insulator with a low thermal conductivity of only 0.25 watts per meter per degree Kelvin (W/m K) and shaft speed and temperature limits of 2,000 feet per minute (ft/min) and 260 C (500 F), respectively. This material required strict adherence to the installation procedure and operator knowledge. Any overtightening could lead to a negative feedback loop of increased heat, leading to more expansion, friction and heat. These effects would damage the shaft or sleeve as a result of crystallization of the PTFE, leading to premature failure.

Graphite was a great material for conducting heat. While dimensionally stable and capable of operating at higher temperatures, graphite lacks mechanical strength and makes maintaining a lower leakage rate difficult.

Because of inherent limitations, other material class options fell short of meeting the need for a general-service packing for standardization, including:

Figure 1. Graphic from the patent for the ePTFE/graphite invention (Graphics courtesy of the author)

Carbon also had better dimensional stability, with a coefficient of thermal expansion of 3.9 x 10-6 inch per inch per degree Fahrenheit (in/in/F) versus PTFE’s 7 x 10-5 in/in/F, or 18 times less thermal expansion than PTFE.
Snyder envisioned capturing the best attributes of two materials—pure graphite and the new ePTFE—eliminating many of the weaknesses of each. By combining them using the high-strength ePTFE structure in place of the conventional PTFE and adding a proprietary mixture of high-grade pure graphite and silicone oil, he created a homogenous ePTFE/graphite (G-Graphite, F-Fluorine, O-Oil) material. He filed for patent in 1979, and the resulting product was commercialized in 1981 (see Figure 1).

This was a major breakthrough in compression packing technology because of its low coefficient of friction, wide chemical compatibility, low leak rate, long life and suitability for a broad range of applications as a general-purpose packing (see Figure 2). 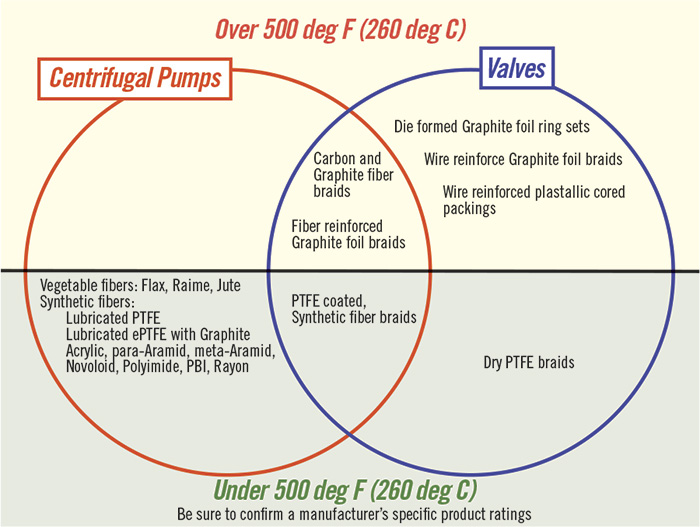 More than 35 years later, various manufacturers provide a range of ePTFE/graphite compositions using different expanded PTFEs, lubricants and graphite combinations, and this material class is still the standard by which all general-service packings are measured. Those who work with compression packing today owe a debt of gratitude to one of the great industry pioneers, whose creativity introduced this breakthrough technology.

In light of an increased emphasis on sustainability, the ePTFE/graphite material is once again—35 years after its introduction—emerging as an important solution for optimizing resources used in the operation of centrifugal pumps.

Next Month: Back to Basics: Mechanical Seals

Carl H. Jones is the global product specialist for packing fibers sealant technologies at W.L. Gore & Associates. He has a B.S. in chemical engineering and an MBA in finance, with more than 30 years of experience in the fluid sealing industry.