Branch-Line Pumping and Other Options

Last month, this column reviewed several examples of open flow, branch-line pumping applications. We used the Branch Line Pumping Calculator (available at www.PumpEd101.com) to compare a branch-line system with two different discharge elevations to a multi-line system that used two individual pumps. Based on the input data, the multi-line system was more efficient, and its breakeven point was barely more than 2 years.

In addition to multi-line, multi-pump systems, a system designer has several other alternatives to open-ended, branch-line systems with multiple elevations. One of the most common is the tank-based system. In this type application, a storage tank is installed at or above the upper most elevation. A lower flow pump is used to keep the tank filled, and gravity supplies water, under pressure, to the lower elevation discharge points.

One of the more common examples is a municipal water supply system. Elevated tanks or those located on hillsides use gravity to supply pressure to the surrounding areas. Another example is high-rise buildings. Many older buildings use roof-mounted tanks to supply pressurized water to the upper floors. One more option is to use a single-service line with two or more pumps operating in series. Figure 1 compares this design to an open-branch system.

Figure 1. Comparison of a single service line with two or more pumps operating in series to an open-branch system

The upper pipeline shown in Figure 1 is the same open-flow, branch-line design illustrated in Part 1. The pump at Point A produces 600 gallons per minute (gpm) at a total dynamic head (TDH) of 200 feet and supplies outflows of 400 gpm and 200 gpm at branch Points B and C. The power required to meet the two branch flows is 43.2 horsepower. The high horsepower is required because the total head seen by the pump is directly proportional to the elevation at Point C.

The pumping system in the lower portion of Figure 1 is different. The pump at Point A still provides 600 gpm, but since it is pumping to Point B only, its discharge head is reduced to 100 feet. A second pump, located at Point B and operating in series, moves the remaining water to Point C. This design reduces the total power required by 33 percent. This results in a smaller pump at Point A that requires 21.6 horsepower and an even smaller one at Point B requiring just 7.2 horsepower. Figure 2 is the calculator portion and compares the variables involved in these two alternatives. 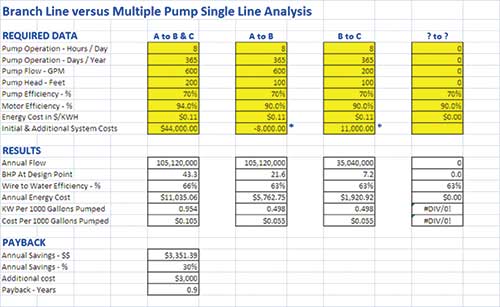 Figure 2. The Branch Line Pumping Calculator computations of the systems

As in the configurations in Part 1, the required data are entered into the yellow cells, and the column to the left is the open-flow, branch-line system. The two columns in the middle represent the series system from Points A to B and B to C. The initial cost of the branch-line system is $44,000.

As I stated in Part 1, my branch-line pumping calculator is not a design tool. Instead, it is an evaluation tool that allows you to compare traditional branch-line systems with several alternatives. Once a choice is made, any number of software systems can assist with the design phase. The Branch Line Pumping Calculator can be downloaded from the “Pump Evaluation, Selection & Testing Tools” page at www.PumpEd101.com.

Joe Evans is responsible for customer and employee education at PumpTech, Inc., a pump and packaged systems manufacturer and distributor with branches throughout the Pacific Northwest. He can be reached via his website www.PumpEd101.com.&nbsp; If there are topics that you would like to see discussed in future columns, drop him an email.