What are the differences between using water or oil as a buffer or barrier fluid?
by Fluid Sealing Association
by Mark Savage
09/26/2013

As operators of pumping equipment become more focused on the safety, reliability and environmental impact resulting from shaft seal leakage, dual mechanical seals have become more prevalent in the industry. A dual mechanical seal offers a second (outer) seal to contain the pumped fluid by creating a cavity or chamber between the inner and outer seal that can be filled with a fluid. When this fluid is unpressurized, it forms a buffer between the pumped fluid and atmosphere and is commonly referred to as a buffer fluid. When pressurized, it forms a barrier between the pumped fluid and atmosphere and is known as a barrier fluid.

Buffer/barrier fluid can be stored, monitored and delivered using many methods. Each is identified by a piping plan number that describes the minimum requirements of each system. The most commonly referenced piping plan originates from the American Petroleum Institute’s standard API 682. 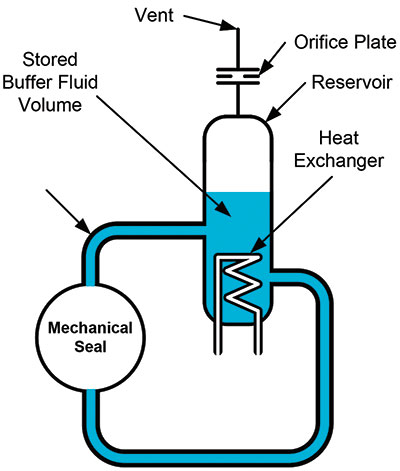 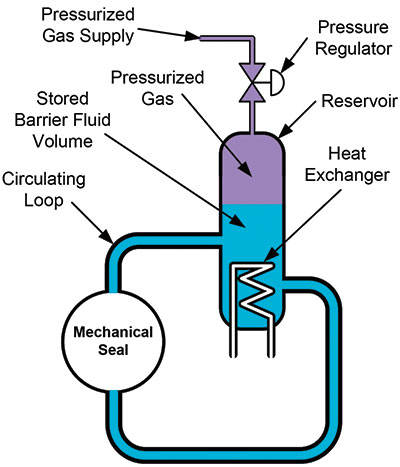 Figure 2. Simplified schematic of a Plan 53A system

Important Characteristics of a  Buffer/Barrier Fluid

Liquids that have characteristics suitable for use as buffer and barrier fluids can be broadly classified into the following:

Typical physical properties of fluids in these categories are listed in Table 1 with a suggested service temperature range. 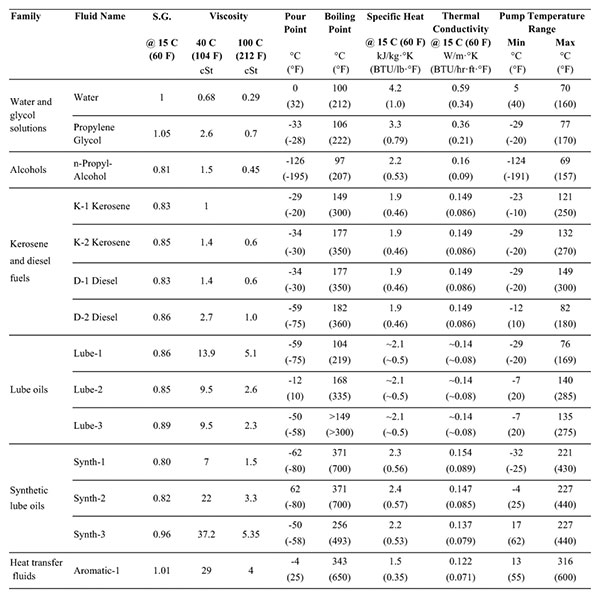 Water offers several benefits as a buffer/barrier fluid. Its thermal conductivity is about three times greater than oils and its specific heat is about twice that of oils, so it is good at transporting heat away from a mechanical seal. Water is inexpensive, easy to handle and store, has few seal material compatibility issues and is nonflammable. It is also compatible with many aqueous pumped solutions. Its viscosity is generally around 1 centistoke at moderate temperatures which offers low resistance to flow in the barrier system.

However, the viscosity becomes low at elevated temperatures limiting its effectiveness as a lubricant for the mechanical seal faces. Water is also susceptible to freezing during the winter months. This results in a narrow window of service and environment temperatures in which water can be used.

Generally, oils can be used in a much wider range of service temperatures. Compared to water, oils offer greater fluid stability at elevated temperatures and are not susceptible to freezing. They also provide excellent lubrication of the mechanical seal faces and, therefore, have the potential to offer longer seal life. Few compatibility issues with mechanical seal materials exist.

Oils are available in a wide range of types, compositions and viscosities. Traditional oils used in the industry include turbine oils and automatic transmission fluids. However, performance as buffer and barrier fluids has not been as successful as other oils, primarily because of the complex mixture of additives in these fluids.

Good performance can be achieved from oils with viscosity below that of ISO Grade 32 oils. High viscosities can result in damage to the mechanical seal faces, particularly when carbon is used as a face material. Paraffinic-based oils also generally perform better than naphthenic oils while synthetic oils offer even better performance. Synthetic lubricants specifically developed for use as a buffer/barrier fluid are now available in the marketplace and offer excellent performance. However, this performance is achieved at the sacrifice of cost.

Next Month: What are pressure seals, and how do they work?