My last two columns (Pumps & Systems, April and May 2014) explained how pump suction behavior depends on how suction pressure is reduced. The original video, which showed two suction pressure tests, was presented. The video can be viewed at www.pump-magazine.com by going to Q&A, question 120. Many readers offered comments and solutions to explain the difference between discharge throttling versus the suction vacuum introduced inside the tank.

The net positive suction head required (NPSHR) curve at low flow has not been explained in previous columns. Typically, the performance curves published in pump manufacturers’ catalogs show that pump head, power and efficiency curve extend from high (run out) flow to shut-off (zero flow). However, the NPSHR curve, for unknown reasons, is usually shown only within a portion of the curve (see Figure 2).

Notice that the NPSHR curve increases toward shut-off. If extended to zero flow, NPSHR may be significant, often greater than the net positive suction head available (NPSHA). This may result in an unexpected and unpleasant surprise during pump operation. In general, a pump should not operate at such low flow. However, if it does, can the pump’s hydraulic design be improved to allow operation at lower flow without NPSHR recirculation stopping it? 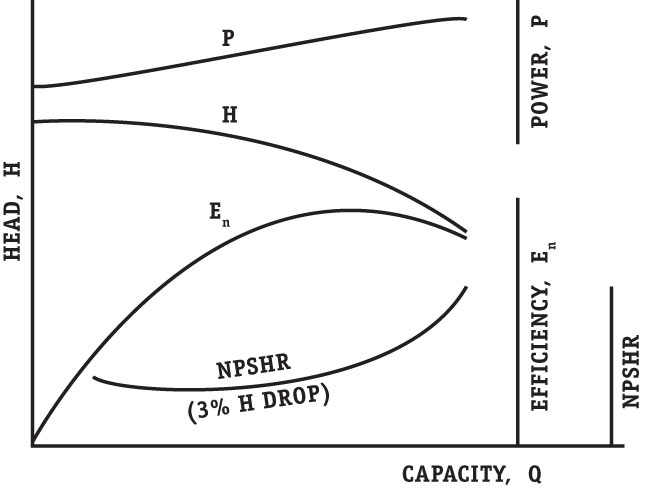 This type operation is possible, to a degree, and it involves the concept of suction specific speed (NSS).

To lower the NPSHR (a seemingly good thing), the impeller eye is usually made larger to reduce suction static pressure near the impeller inlet as much as possible and, therefore, to lower the NPSHR. However, in doing so, the larger eye becomes a problem—not near the best efficiency point (BEP)—but at the low flow at which suction recirculation can occur (see Figure 3).

Recirculation also leads to cavitation. However, the cause of this type of cavitation is different from what causes classic cavitation that occurs at high flow rates. The recirculation produces a tornado-like pattern and a blade-to-blade flow separation pattern, which is a complex mechanism. The pressure drops as a result, and when that occurs, net positive suction head suffers. For this reason, suction specific speed is often limited to values below 8,500 (U.S. units).

While specific speed (NS) is mostly related to the discharge side of the pump, suction specific speed deals primarily with its suction (inlet) side. The head (H) term in the denominator of Equation 1 for specific speed is substituted with the NPSHR in Equation 2.

Suction specific speed values range from about 6,000 to 15,000 and sometimes higher with specialized designs. A pump user would prefer to provide as low an NPSHA as possible because it often relates to system costs. For example, a higher liquid level in the basin of the cooling water pumps requires taller basin walls or deeper excavation to place the pump’s centerline below the liquid level. On the other hand, a pump manufacturer wants to have more NPSHA, with an ample margin above the pump’s NPSHR to avoid problems such as cavitation and other damage.

Figure 3. The impeller eye size affects NPSHR (the red curve is for the larger eye—better near BEP, worse at low flow).

The upshot of this is that a larger impeller eye decreases the NPSHR at the BEP, but it causes flow separation problems at off-peak, low-flow conditions. In other words, a high suction specific speed design is only better if a pump does not operate significantly below its BEP.

Figure 4. Plant experience indicates that impellers designed with suction specific speeds of more than 9,000 have a poor reliability record.

With few exceptions, a centrifugal pump rarely operates strictly at its BEP, and pumps often do not operate close to their BEPs. Plant flow demands change constantly, and operators often use the discharge valve to control the pump flow. A high suction specific speed design often results in reliability problems because of frequent operation in the undesirable low-flow range. Based on values in the Hydraulic Institute guidelines, if suction specific speeds are above 8,500 to 9,000, pump reliability begins to suffer exponentially (see Figure 4).