In the first three articles of my recent series “Case Study: Troubleshooting Seal Problems in Cooling Water Pumps,” published in Pumps & Systems (December 2016, January and February 2017), we discussed the background of the seals’ reliability issue and the application of a monitoring troubleshooting system (PREMS-2A) used to track the issue to a root cause. Many readers offered suggestions, some of which were presented in the March 2017 Pumping Prescriptions column. This final installment of the series will present the ultimate pinpointing of the root cause and solutions for the problem.

Having ruled out operational issues, the focus of our work steadily narrowed toward the design and installation itself. As was noted by Lawrence Leising in our March 2017 article, there is a key difference between the seal chamber environment within the horizontally mounted versus vertically mounted pumps.

While a more typical horizontal configuration of the single stage double suction split casing pumps may not be as susceptible to a dry running seal faces environment, a vertical orientation of such pumps can become a big issue for the seals in this regard. A detailed evaluation by the seal manufacturer of these repeatedly failing seals further confirmed the conclusions reached by the authors: the lack of vent ports was the main problem.

The major issue was air entrapment at the top of the seal chamber with no air vent connection provided. This was apparent from the condition of the seal faces.

Both primary (rotary) seal faces exhibit significant phonographic finish with chipping at the edges. This type of damage is typically indicative of lack of lubrication (dry running).

Dry running causes localized heat buildup, resulting in gauging of particles from the seal faces, which, spinning at high velocity, causes abrasive damage to the phases. The damage was greater at the upper seal due to a lack of venting and greater propensity of air trapped there. The seals were being run dry every time a suction strainer was cleaned during regular maintenance.

The fact that both upper and lower seals exhibited failure was peculiar. While the failure of the upper seal due to lack of venting was reasonable, the lower seal problem would not fit this theory. The air should not be trapped at the lower seal faces, but easily float up.

It was discovered that the main issue for the lower seal was improper installation, as shown in Images 3 and 4.

The rotary face seal was stuck on the pump shaft due to a combination of elastomer hardening and improper installation by mechanics using the incorrect lubricant. This caused swelling, grip to the shaft and no ability to move axially to compensate and set proper dynamical operating clearance between faces. Uneven wear of these faces was also a result of the seal elastomer swelling and gripping to the shaft. So each seal side had its own root cause problem, which made it initially difficult to fit to a single main root cause theory. 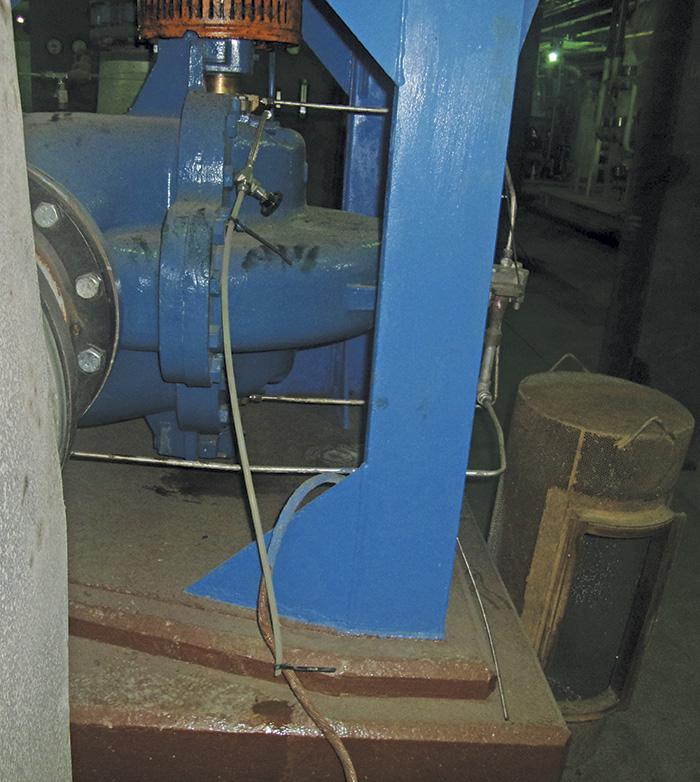 Also, with the cooling water tower having a biocide treatment program, side effects of biocide and chlorine likely contributed to swelling of the Viton elastomers. These are expected to be replaced by the Aflas elastomers at the next rebuild, as well as hardened seal faces.

After two months, the seals are still holding. The suction strainer has been cleaned twice, followed by proper venting, which is being implemented as a procedural requirement.

In conclusion, a step-by-step troubleshooting process using the PREMS-2A instrumentation has demonstrated a benefit of a steady and methodical process of elimination of possibilities of seal failures. Honing in on the root cause and applying corrective action solves the continual and repetitive issue of mechanical seal failures.

Dr. Nelik (aka “Dr. Pump”) is president of Pumping Machinery LLC, an Atlanta-based firm specializing in pump consulting, training, equipment troubleshooting and pump repairs. Dr. Nelik has 30 years of experience in pumps and pumping equipment. He may be reached at pump-magazine.com. For more information, visit www.pumpingmachinery.com/pump_school/pump_school.htm.