Second in a Series

The first part of this series (Pumps & Systems, December 2016, read it here) introduced an investigation involving three double-suction horizontal split-case pumps (labeled 2A, 2B and 2C) that have had mechanical seal issues since their installation around 2009. Of the four power generation units at East Kentucky Power, Unit 2 was the only one having these problems.

Because the flow was not readable by the flow meter at the time of the initial test, a simplified assumption was made regarding the pump’s actual head-capacity curve as supplied by the original equipment manufacturer (OEM). 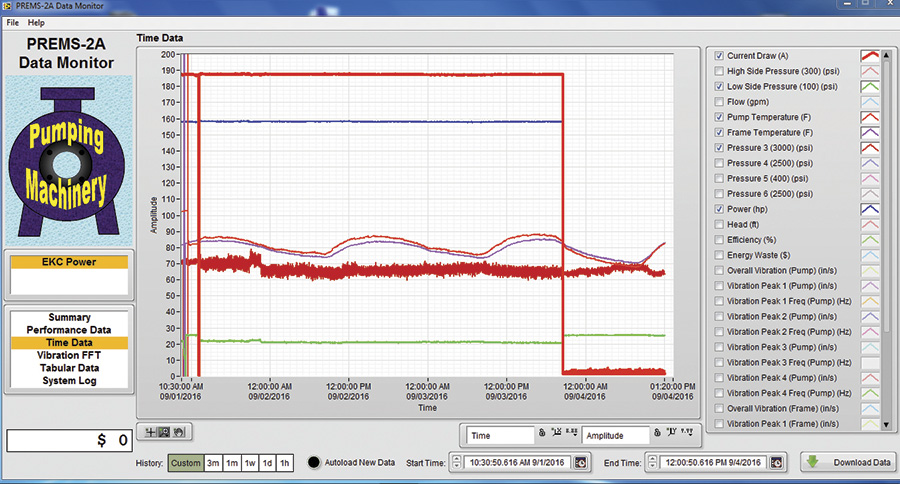 Figure 1. A screenshot of the live data from the PREMS-2A system (Graphics courtesy of the author)

As shown in Figures 1 and 2, in 16 hours (8,279 data points), the pump head varied between 88 and 131 feet—3,600 to 6,000 gallons per minute (gpm). This indicated that Pump 2A operated reasonably close to its best efficiency point (BEP), and no unusual internal flow-induced disturbances or cavitation would be expected. Pumps 2B and 2C showed similar results. Transposing the data over the OEM curve revealed the following information:

The ultrasonic flow meter’s accuracy is 8 to 10 percent, and the pitot tube is 1 to 2 percent accurate. Pitot tube meters generally read a somewhat higher (about 6 percent) flow when compared with the ultrasonic meter.
As shown in the data, the bearing housing temperature readings were not high, and they exhibited a slow-changing trend, reflecting mainly ambient temperature variations throughout the day/night—no “smoking gun.”

Figure 2. Expanded data plot of pump head for Pump 2A (calculated from discharge and suction pressures), temperatures, amps (left side scale) and vibrations (right side scale)

A company that performs flow measurements obtained a flow record, from Sept. 9-16, 2016.

If the plant is running, both pumps are running; if the plant is offline for an outage, one pump runs until the turbine is cooled down (about two to three days) and then all pumps shut off during the outage. If a short-term outage takes place, one pump will run because the turbine will still be hot. Once the unit is fired back up, both pumps will be running.

During the earlier PREMS-2A tests, the team deduced the flow from the pressures, assuming non-degradation in performance. That translated to a flow range of 4,000 to 5,500 per pump. The flow-measurement company’s data, however, shows about 3,000 to 4,000 per pump when two run together, or 4,500 when one runs. This implies roughly 1,000 gpm degradation of the flow from what would be expected with the OEM curve. The company stated that its ultrasonic meter tends to read about 6 percent lower than the actual flow, which was confirmed by completing the pitot test in conjunction with the flow test. A typical 4,000 gpm reading would need to be corrected to approximately 1.06 x 4,000 = 4,240; for example, a 300 gpm correction, or a 700 gpm deficit compared with the OEM curve. 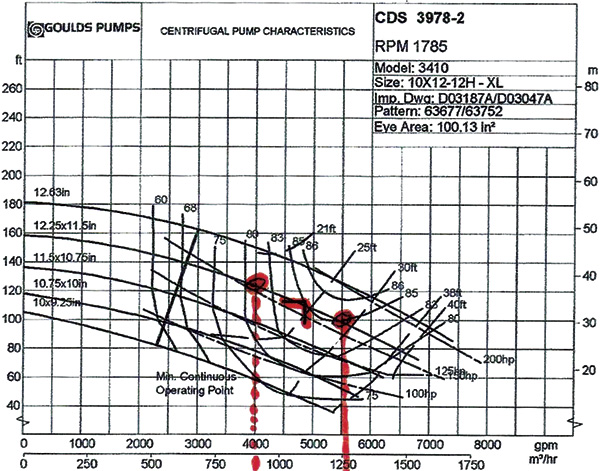 As a reference, 0.3 in/sec is considered a warning, and 0.5 in/sec is an alarm. The data indicated that there was no apparent vibration concern. Some changes in vibration fluctuations in Pump 2C were noted, but those levels stayed relatively low, never exceeding about 0.25 in/sec.

Vibrations also were verified manually by a hand-held Fast Fourier Transform (FFT) analyzer along the entire perimeter of each pump’s frame (each of the four sides: at the three locations along the top steel member, bottom and both sides). As would be expected, the upper member (cross bar) showed higher vibration compared with the sides or lower bars (0.08 in/sec at the upper bar, gradually reducing to 0.02 in/sec at the lower [foundation level] bar). That indicated that the structural integrity of the supporting structure was adequate.

The structural detail of the lower bearing housing was suspected to be compromised (cracked, loose bearing fits, etc.). In this case, the hammering action of this low frequency could be a contributing factor to the seals’ compromised integrity and failures.

The next planned step was to reassemble the pump(s) during the upcoming outage and examine them for the following:

One alternative to mechanical seals is a simple packing (with possible lantern ring/flush). This arrangement may be enhanced if the packing chamber is designed to have a follow-up chamber followed by a bushing to further restrict any flow of leakage past the seals. The follow-up chamber would slowly accumulate any small leakage past the packing and, before exiting along the shaft toward the bearings, the leakage from the packings would be directed to a drain—never getting past the gland and into the bearings.

This arrangement would be simple, inexpensive and reliable. Eliminating the weakest component (seal) and replacing it with a more reliable component (packing) should be an alternative for any installation that does not require a mechanical seal.

Because of the team’s inability to read the flow at the initial test, they could not determine the actual degradation of efficiency. Instead, they used the original OEM curve to estimate the flow so the “deficiency” (the opposite of efficiency) impact was not calculated. Their suggestion was to follow up with this additional test after the outage, with the PREMS-2A assisted by the GE878 ultrasonic flow meter.

The next part of this series will discuss what happened: inspection findings, fixes and follow-up monitoring.