Third in a Series

In the first two articles of this series (Pumps & Systems, December 2016, read it here, and January 2017, read it here), we discussed the issue of leaky seals on double-suction horizontal split-case pumps mounted in a (somewhat unusual) vertical orientation. Both sides (inboard and outboard) leaked on all three pumps for years in the specific power-generation unit at the East Kentucky Power site.

The earlier articles described the application of the PREMS-2A data acquisition system to initiate the troubleshooting process and evaluate the impact of operation (proximity to the best efficiency point [BEP]), vibrations (possible hammering effect on seals) and similar factors.

It was determined the pumps operated within satisfactory proximity to the BEP, and a continual monitoring of vibrations (including spectral analysis) revealed no issues.

The effect of the alignment and nozzle loads, as well as seal assembly detail, was to be evaluated next during the removal of a pump at the next outage. This article describes some findings of the pump removal and disassembly inspection. 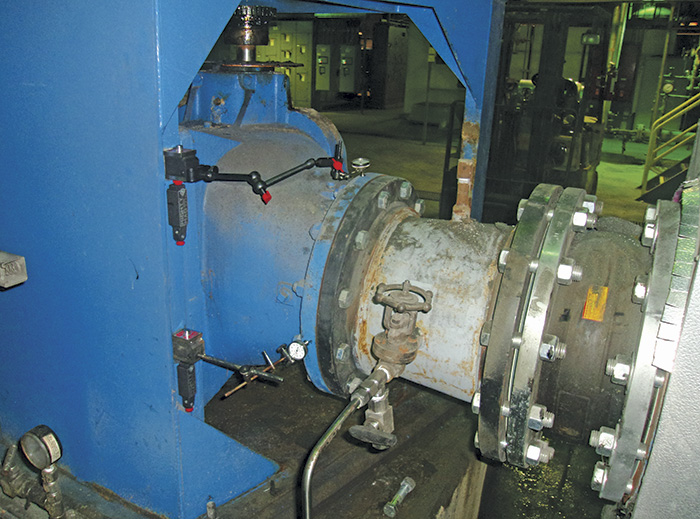 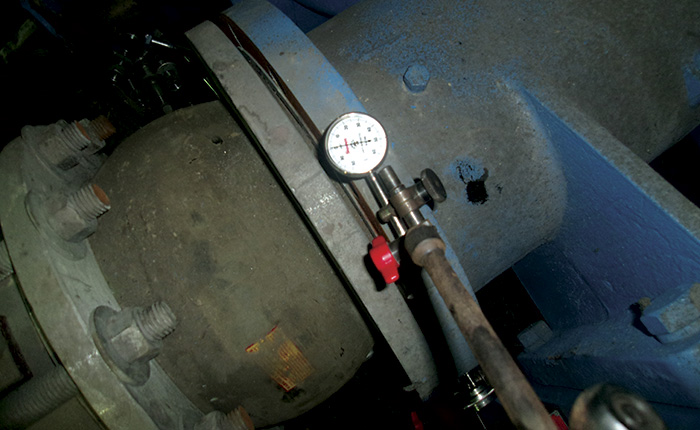 Images 1 and 2. Dial indicators moved no more than 0.005 inches, which is satisfactory, and confirmed that flexible joints do the job of preventing piping load to be exerted and distorting the pump casing. (Images courtesy of the author)

Dial indicators were installed at the pump flanges during piping unbolting, and no significant movement was noticed. The pump inspection revealed:

Several observations were made after an examination of the seals (John Crane Type 1 single spring).

The primary seal face did not move forward and appeared to be stuck to the shaft on its elastomer. Seal rotary could not be easily removed from the shaft and was tapped off with a hammer and chisel using lubricant on the bellows elastomer.

The NDE side seal rotary was damaged apparently during the initial installation—the bellows were rolled under, causing the seal face to be significantly out-of-parallelism with the stationary face. The DE side seal did not have this same type of issue.

The interference between the seal bellows and the shaft was 0.020 inches, so the seal rotary could not be installed (even with lubricant) by hand, which is contrary to the instruction manual and expectations.

This interference appeared to be significant and raised questions: Was the seal manufactured incorrectly? Was the shaft made oversized, incorrectly? Did the seal elastomer bellows swell during service? 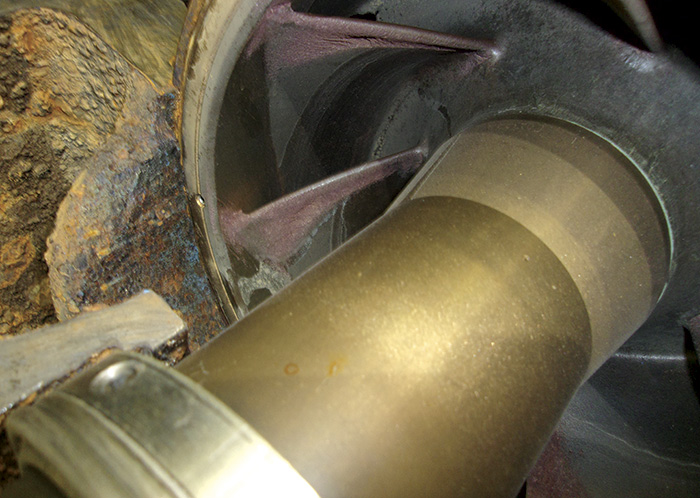 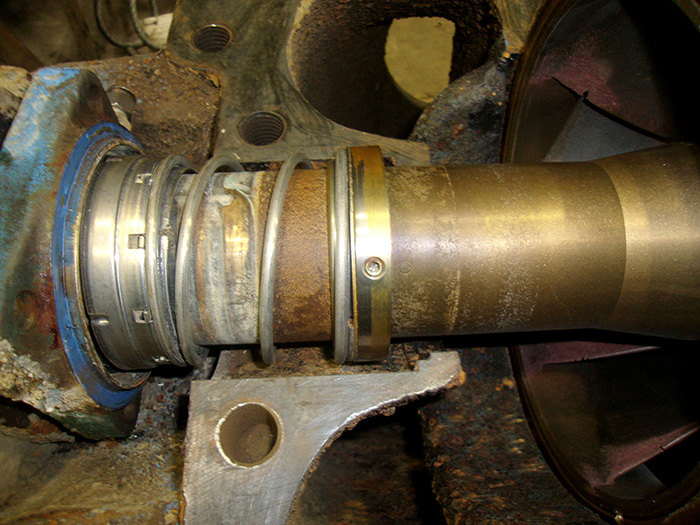 Another observation was the seal construction was soft (rotary) versus hard (stationary). Also, there was no venting arrangement, which meant air accumulation at the top seal could have been a contributing issue. 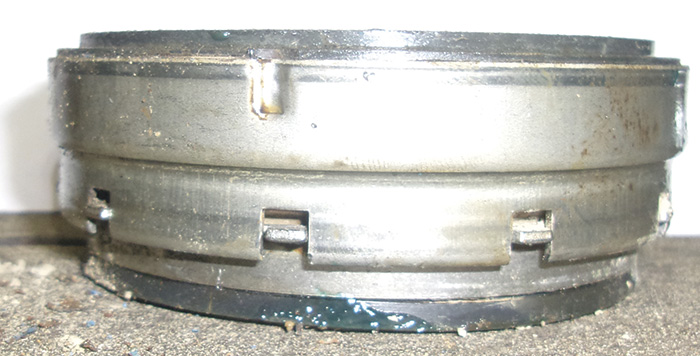 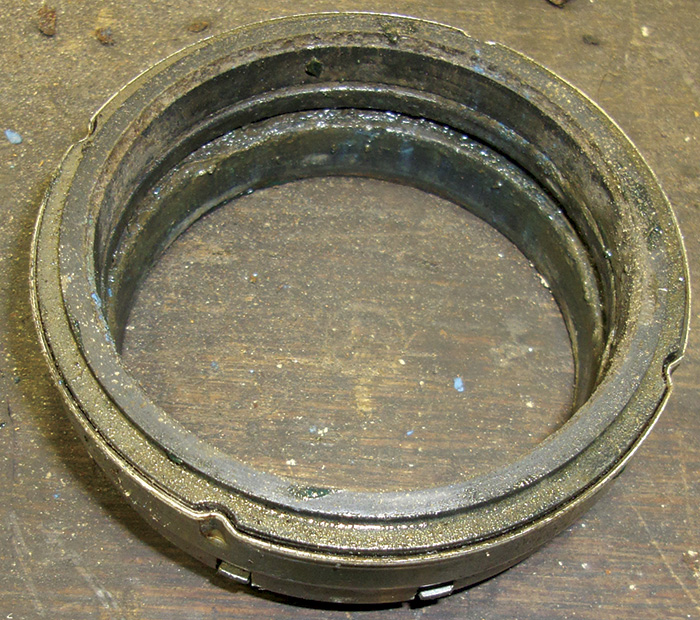 We will report on these findings in the final article (fourth in this series) as soon as we have the results. We would like to thank all those who provided their input.

Among the input we received from readers on the first two articles in this series, we would like to share some information on similar issues with seals from Lawrence Leising, maintenance supervisor for the Town Of Amherst, New York, Engineering Department’s Wastewater Treatment Division.

“In your recent article—Case Study (part 1 of 3, read it here)—you referenced that the pumps were installed in a vertical position. We have vertical pumps with (single split) mechanical seals installed. We encountered a problem of short seal life as well, and I would like to pass on a solution which cured our problem.

“In our vertical pumps we have a volute case air bleed valve that is opened to release air after a rebuild or for any dry pump startup. The seal also has a vent port into which a vent air release valve is installed. They are also flush/vent single seals. Typically the seal vent would be used to vent the seal before startup.

“Our flush water has entrained air and so does the fluid being pumped. Due to the seal being at the pumps’ wet end high point, this is where the air collects—the flush water can’t displace it.

“I happened to be looking at our hot water heating system in the plant one day and noticed the high vents installed to release air. This gave me the idea that because the high vent continuously releases air, it may be a good fit for the pump seals. We attached the air release valve to the pump frame higher than the seal. Flexible tubing connects the seal vent port to the valve. The valve uses an internal float and needle valve. Any trapped air is automatically released keeping the seal full of flush water.

“Since doing this modification, our seal failure problem has been drastically reduced. The needle valve stays dry and clean because the float prevents water from getting to that point. Our seals are Chesterton 442s and the air release valve is made by ITT. We had a visit from a Chesterton field representative, he was amazed at our solution.”