Cryogenic products are produced globally and are critical to industries such as refining, steel, medical, plastics, chemical, petrochemical, brewing, welding and fuels. Liquid nitrogen (LN2), liquid oxygen (LOX) and liquid argon (LAR) are some of the specific liquefied gases used in these products. During cryogenic production and distribution, operating conditions can be extreme. Pumps may operate at speeds of up to 8,000 rotations per minute, operating pressures may reach 400 pounds per square inch (psi) and temperatures can be as low as -320 F (-196 C).

While many users in these industries have an on-site air separation system for their cryogenic needs, others rely on cryogenic trailers to deliver products. Because pumps and mechanical seals can be affected during transfer, the transportation of these products to multiple destinations is an everyday challenge. The centrifugal pumps on cryogenic trailers start and stop often, and startup procedures are often not followed consistently. These conditions cause conventional liquid-lubricated mechanical seals to perform poorly.

If the centrifugal pumps are not cooled before starting, priming will be difficult, and the seal faces will be exposed to a gas instead of a liquid. Gas is a poor lubricant and can be detrimental to the life of the seal faces. The coefficient of friction of face materials depends on the ability of the fluid to maintain a film across the faces. Because the pumps are started hundreds of times each month, the opportunity for seal failure is exacerbated.

For more than 40 years, trailer pump mechanical seals have been evolving to handle the challenging task of sealing cryogenic products in centrifugal pumps. Oxygen compliance makes the function of these seals even more critical.

Trailer pump performance is often measured in the number of hours the pump has run before the mechanical seal is replaced. This run time is expressed as the mean time between seal failure (MTBF). A typical seal life ranges from 50 to 1,700 hours, depending on the amount of lubrication available at the seal faces. 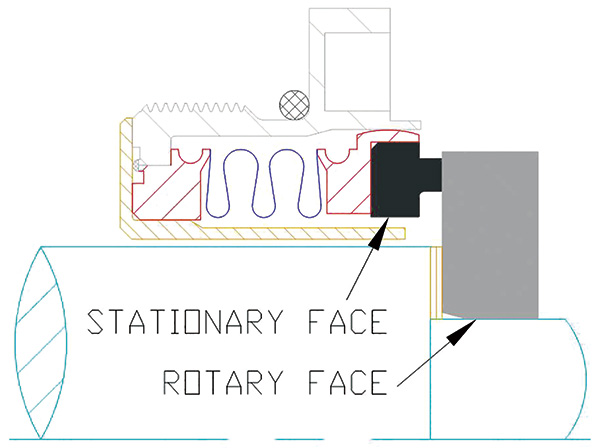 The first generation of liquid-lubricated mechanical seals used on these trailers was a formed bellow stationary design (see Figure 1), which had a non-rotating spring element. This stationary design seal used a shrink-fitted, resin grade carbon stationary face running against a harden stainless steel rotary face. These seals had fair seal life when used in liquid cryogenic product applications. The resin grade, stationary carbon face and harden stainless steel rotary face, however, would last only a short time, especially if the pumps were started incorrectly, causing gas to lubricate the seal faces. 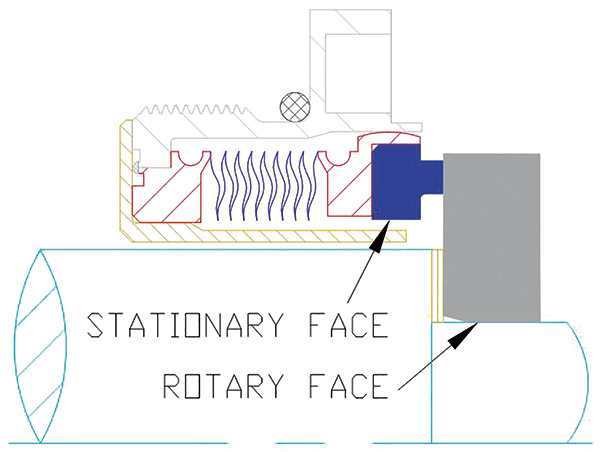 The second generation of liquid-lubricated mechanical seals used a blue wearing or soft face made of glass-filled polytetrafluoroethylene (PTFE) and other special fillers to enhance the loading properties (see Figure 2). Originally, this glass-filled PTFE face was shrink fitted or epoxied into the bellows insert holder. Later designs replaced the shrink fit with a static O-ring seal to retain and hold the face in place. The O-ring drive was insufficient for holding the face in a static position, allowing the face to spin around the O-ring.

This design was later modified to feature a lug drive that prevented the blue faces from spinning. Another upgrade to these seals came in the form of welded metal bellows instead of the formed bellows. The welded bellows were more pliable and more forgiving than the formed bellows, allowing for improved performance.

Further MTBF improvements came through the use of tungsten carbide as the hard face in place of the hardened stainless steel rotary face. The improvements were especially pronounced in seals operating under high pressure. Unfortunately, the industry did not universally adopt tungsten carbide because of the higher cost. 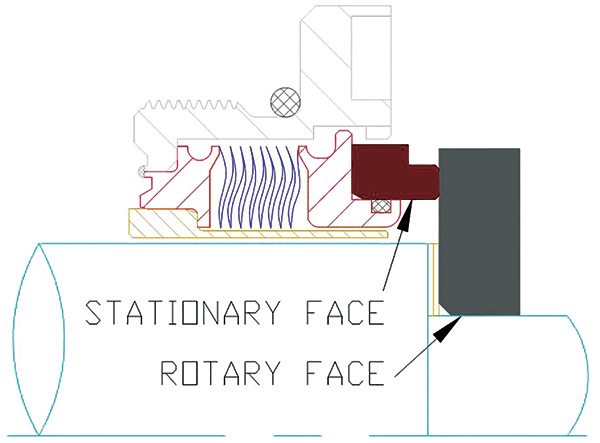 The third generation of liquid-lubricated mechanical seals also used a welded metal bellows design, but the stationary face was changed to a maroon PTFE glass-filled blended material (see Figure 3). Alternatively, the material sometimes had ceramic fillers. It originally also used a static O-ring to seal and retain the face in place. Eventually designs began employing a lug drive feature instead, using a static O-ring to seal the face to the holder in the bellows stationary assembly. The rotary face was available in either hardened stainless steel or tungsten carbide. This seal saw some improvement in MTBF but still had issues when the fluid film between the seal faces was minimal. 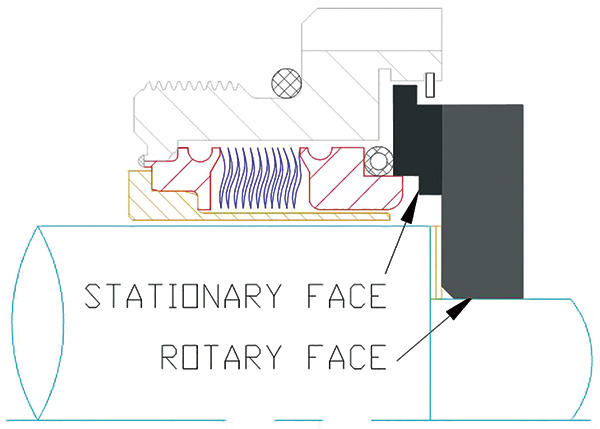 The fourth generation of mechanical seals transitioned from a liquid-lubricated seal design to a dry-running gas seal (see Figure 4). This non-contacting (lift-off) gas seal operates by establishing a very thin gas film between the antimony carbon stationary face and the tungsten carbide rotary face. This seal is effective for sealing gaseous environments and has negligible wear during startup and shutdown. The drawback for this seal type is expense. The cost is two to three times that of a liquid-lubricated seal. 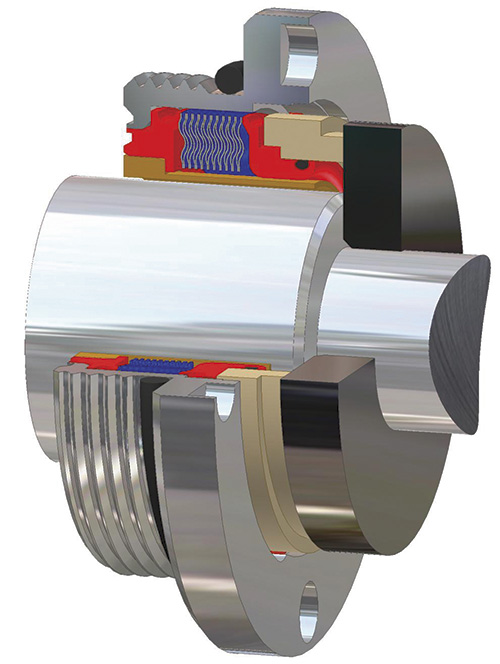 This premium polymer PTFE face incorporates a drive lug feature along with a static O-ring, which provides a positive seal to the stationary housing holder. The welded 347 stainless steel bellow convolutions were redesigned for greater strength and durability. The premium tungsten carbide rotary face has been incorporated as a standard component. While tungsten carbide improves the overall performance of the seal, the tribological properties are advanced further through a proprietary surface treatment.

Although many factors can contribute to a shorter seal life for cryogenic trailer pumps, the biggest contributing cause for most of these failures is seal face damage caused by friction and wear.

This fifth generation seal performs significantly better than the previous generations because it works in both liquid and intermittent two-phase environments. The combination of the stationary bellows design, the tribological properties of the seal face materials and the treatment of the tungsten carbide rotary face reduces the friction and wear in these two-phase environments.

Michael P. Cresap is vice president technical services manager of PPC Mechanical Seals Inc. He joined PPC Mechanical Seals in 1973 and has worked in engineering in various capacities, including engineering manager. His current responsibilities include technical support for sales, research and development, and training. He is also involved with pump/original equipment manufacturer for application engineering. He was the team leader that developed the seal design for this article. Cresap may be reached at 1-800-731-7325 or mcresap@ppcmechanicalseals.com. For more information, visit ppcmechanicalseals.com.