Established in 1896, the F. Hoffmann-La Roche Ltd. company, today known as Roche, is recognized as the world’s fifth largest pharmaceutical company. It operates in locations around the globe, including the U.S., Ireland, Germany and Pakistan. Roche’s operations are divided into two core businesses: Pharmaceuticals and Diagnostics.

The Roche Diagnostics GmbH facility in Penzberg, Germany, is home to both pharmaceutical and diagnostics operations. This makes it one of the largest biotechnology research centers in Europe. The facility produces the active ingredients used in almost all the pharmaceuticals and reagents that Roche manufactures.

The Penzberg facility has been in operation for 40 years, employs more than 5,100 people and includes about 60 buildings. Large volumes of raw ingredients and finished pharmaceutical products are constantly on the move. The solvents used in the pharmaceutical production process are among the most critical fluids at the facility.

“Roche Diagnostics produces lots of medicines and is a very big pharmaceutical factory,” said Florian Habeck, assistant tank manager at Roche Diagnostics. “We must have solvents to produce our products. We buy the solvents from manufacturers, and after using them for production, we send the used solvents to underground storage tanks.” 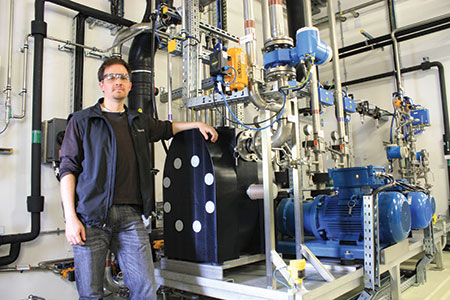 Roche has four underground tanks to which the used solvents are transferred. These tanks are quite large, with storage capacities ranging from 60 to 100 cubic meters (m3) (15,800 to 26,400 gallons). The tanks are monitored and controlled from a computer station that gives the operator real-time information, such as liquid level and overfill or leakage warnings.

“We can look at all of the waste-solvent tanks—the underground tanks—and the system shows us all the warnings, from the level of the tanks or when we have to order a tank truck for disposal,” Habeck said. “When a tank needs to be emptied, the tank truck uses a hose for the disposal of the waste solvent. The dangerous part is when we connect the hose to the truck and begin pumping the waste solvent.” 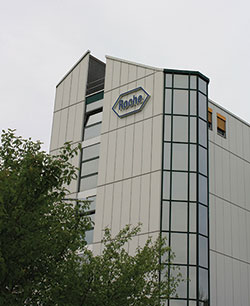 Founded in 1896, Roche has grown into the world’s fifth largest pharmaceutical manufacturer.

Many of the solvents are classified as hazardous or dangerous chemicals and must be handled according to the ATEX requirements of European Union directive 94/9/EG regarding the use and disposal of potentially explosive liquids.

Roche’s solvent-handling operation requires a pump that can safely and efficiently transfer potentially dangerous chemicals at a high volume. Since the late 1980s, Roche has relied on plastic air-operated double-diaphragm (AODD) pump technology to conduct solvent transfer. During their 25 years at the site, the pumps successfully moved liquids with particles in them while maintaining a smooth flow. 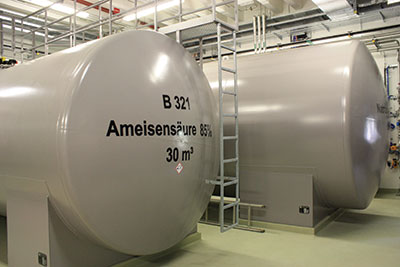 The underground tanks that store used solvents at the Roche Diagnostics facility range in size from 60 to 100 cubic meters (15,800 to 26,400 gallons) and can be accessed from the surface.

When a new hall for the solvent production operations was built in 2013, Roche upgraded the facility’s pumps. The new pumps feature solid-block construction with abrasion-resistant polyethylene (PE) and polytetrafluoroethylene (PTFE) materials. The PE conductive and PTFE conductive models meet all ATEX requirements, which means that they are suitable for use when pumping hazardous and dangerous materials. The pumps use stainless-steel ring technology, eliminating the need for mechanical seals and preventing leaks through consistent compression around the ring’s exterior.

The pump—known to Roche personnel as “Big Bertha”—has a maximum flow rate of 48 m3/hour—12,600 gallons per hour (gph). Because the piping runs that are connected to the truck-loading area are 13 to 16 feet (4 to 5 meters) long, the pump’s suction line was outfitted with a pulsation damper. This allows the pump to produce a virtually uniform flow. 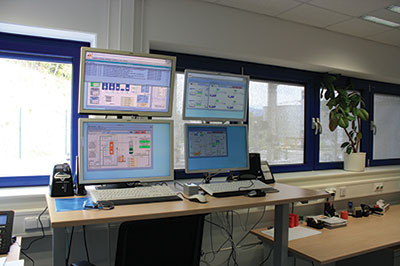 “We use the pump to transfer the waste solvent from the underground tanks to the tank truck,” Habeck said. “The truck has a capacity of 25 m3 (6,600 gallons), and we want to fill the tank very quickly. That’s why we bought this big pump—so we can do it in a short amount of time. It’s all about efficiency, and we have this pump because it is very efficient.”

With its maximum flow rate, the pump can fill a standard tank truck with a 25-m3 capacity in about 30 minutes. 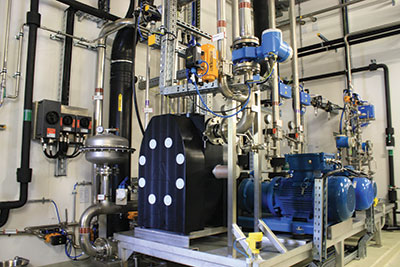 With a maximum flow rate of 48 m3/hr, the Roche facility’s AODD pump meets the facility’s need for a pump that can safely fill a 25-m3 (6,600-gallon) tank truck with used solvents in about 30 minutes.

Smaller pumps, with maximum flow rates of 8 m3/hour (2,100 gph) and pulsation dampeners, transfer certain classes of used solvents to Roche’s in-house recycling area, where they are treated before they are transferred to a wastewater disposal facility.

“Safety and efficiency are the two most important aspects here at the Roche Diagnostics site,” Habeck said. “I think that the pumps are very safe and reliable, and they are one thing that I never have to worry about.”

Harald Vogl is a regional sales manager for Almatec and Pump Solutions Group (PSG). Based in Kamp-Lintfort, Germany, Almatec manufactures air-operated double-diaphragm pumps and is an operating company within Dover Corporation’s PSG. PSG is comprised of several of the world’s leading pump brands, including Abaque, Almatec, Blackmer, Ebsray, Finder, Griswold, Neptune, Maag, Mouvex, Quattroflow and Wilden. Vogl may be reached at harald.vogl@psgdover.com or +49 89 638990-05. For more information, visit almatec.de or psgdover.com.