Variable frequency drives (VFDs) have vastly evolved during the last 25 years. Hundreds of articles have been written about their advantages when used with a pump motor compared with an across-the-line motor and flow control valve. One primary benefit occurs when slowing the motor speed leads to reduced kilowatts, resulting in reduced electrical usage. When the electrical loading of a facility is predominantly made up of VFDs, some would view this as a success story. The power company, however, might disagree because VFDs can add unwanted harmonics to the system.

VFD sizes are smaller, their intelligence is greater and the cost has remained flat despite other industrial products following inflation prices. VFDs dominate variable torque applications like those found in pumps and fans.

VFDs are noted for their precise motor control output, but rarely is the VFD's input discussed. The VFD's input configuration sets the stage for how clean the power consumption will be. Before the advent of VFDs, power companies had to deal with across-the-line motors. Lightly loaded motors had poor power factor, and starting these motors meant short-term heavy demands on the system. Both would warrant a penalty on the user. VFDs remove this concern, but with the popularity of VFDs increasing in facilities, the harmonics content created by VFDs increases as well. Utilities are taking note of this new phenomenon. Exploring the VFD inputs can help end users find clarity about harmonics.

In general terms, VFDs use diodes, silicon-controlled rectifiers (SCRs) or a combination of both to convert the fixed AC line voltage into DC voltage. The DC voltage has some ripple because SCR/diode bridges are not a perfect rectification and capacitors are used to smooth out the DC. Transistors are then used to chop up the DC voltage and re-create a simulated AC waveform. This method is typically referred to as pulse width modulation (PWM). The latter two-thirds of the drive are consistent throughout several types and brands of drives. It is also the section that receives the most processor control and hype of how one technology of volts/hertz control or sensorless vector control is best. The output section of the VFD has little effect on how the input section behaves, so it will be excluded at this point from this article, and the input section will be explored further.

From the information above, it can be derived that the line voltage needs to be converted to DC in some manner. The most common method comprising the majority of the installed base uses six diodes/SCRs, also known as six-pulse drives. These drives use standard three-phase power and have single unit rectification. No special hardware is required outside the VFD. However, when six-pulse VFDs are used, they will not behave as a linear load on the system, and this is what first catches the attention of a utility provider (see Figure 2). 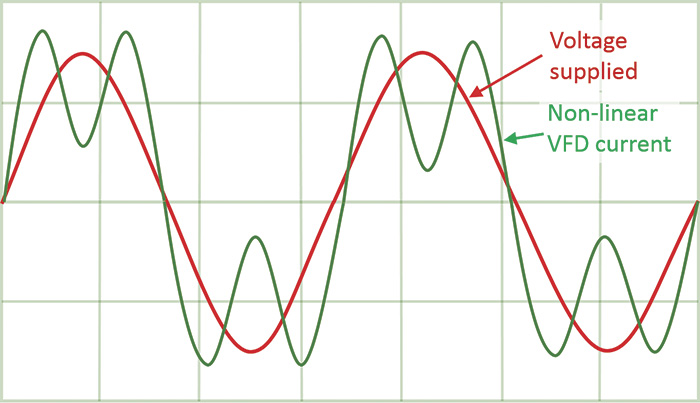 Non-linear loading simply means the current is not consumed in the same format as the voltage is supplied by the utility. This may also be referred to as "harmonic current" because it will have multiples of the line frequency inside the waveform. For a six-pulse drive, this is the 5th, 7th, 11th, 13th, 17th and 19th harmonics. The harmonics created are in the range of 50-70 percent current harmonics (total harmonic distortion current, or THDi). If this were the only loading in the facility, the utility would say the load is "harmonic rich" and would likely require the user to add a harmonic mitigation device to correct the problem. However, it was stated earlier that VFDs reduce kilowatt usage. Why is there concern about harmonics if the user has actually lowered the amount of usage?

Harmonic currents created by non-linear loading will create a voltage harmonic on the grid, which can then affect neighboring consumers of the utility. Internal harmonics within the end-users' facility can cause heating in transformers and cabling and potentially erratic problems with sensitive electronics such as programmable logic controllers (PLCs) and distributed control systems (DCS). The Institute of Electrical and Electronics Engineers (IEEE) has created a recommendation document referred to as IEEE 519-2014 on how harmonics should be limited in various facilities.

There are several methods to reduce or eliminate the harmonics content that a VFD creates. One choice is to add an inductor, more commercially known as a reactor, to the input of the VFD. These are relatively inexpensive and will reduce the harmonic content from above 60 percent to the 40 percent range. This is significant cost and size reduction for a small device (see Figure 3).

Figure 3. A reactor is placed in front of the VFD. Reactors slow the current fluctuations and thus reduce harmonics.

An alternative choice is to use a 12-pulse drive that has two rectification modules with six-phase power. However, the utility does not provide industrial consumers with six phases. A custom-wound transformer is required in front of the VFD. The transformer uses a voltage phase-shift to create two new three-phase voltages electrically displaced 30 degrees apart. The current as seen by the utility is cleaner and the harmonic content is reduced below 15 percent. It can be concluded that the 12-pulse configuration is more expensive and requires additional installation costs (see Figure 4). 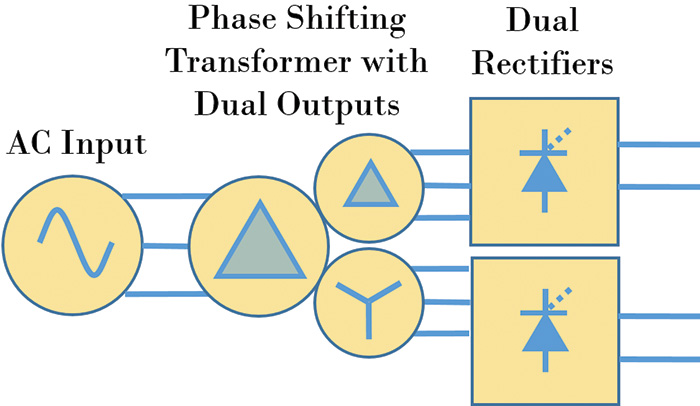 Figure 4. A 12-pulse VFD is an alternate type of VFD that has less harmonics than a six-pulse VFD, but requires a special Delta-Delta/Wye transformer.

These multi-pulse drives configurations continue in multiples of six: 12-pulse, 18-pulse, 24-pulse and 30-pulse. Each continues to need custom configurations in order to gain the additional phase shifted voltages. More hardware equals more cost in trade for less harmonic content. At 18 pulses and up, expectations of harmonics content are less than 5 percent THDi.

An alternative choice for harmonics correction is to use harmonic filters. These come in many different configurations, but the two primary options discussed here are passive and active.

Passive filters consist of passive electrical components, capacitors and inductors, configured to trap or notch offensive frequencies. These perform best at rated loads and should be sized accordingly. Expectations with this device are less than 8 percent THDi. Be aware that the amount of harmonic correction begins to deteriorate with passive devices at lighter loads (see Figure 5).

Figure 5. A passive filter is a series device that goes in line with the VFD.

Active filters share some components but add processor-controlled transistors (fast switches) to inject negative harmonics back into the system. These positive and negative harmonics cancel out, essentially reducing harmonic content to levels below 5 percent THDi. Unlike passive filters that are placed in series with the VFD load, active filters are placed in parallel to the VFD load. Active filters cost more than their passive counterparts but perform better from light loads to heavy loads, since they actively adjust to changing conditions (see Figure 6). 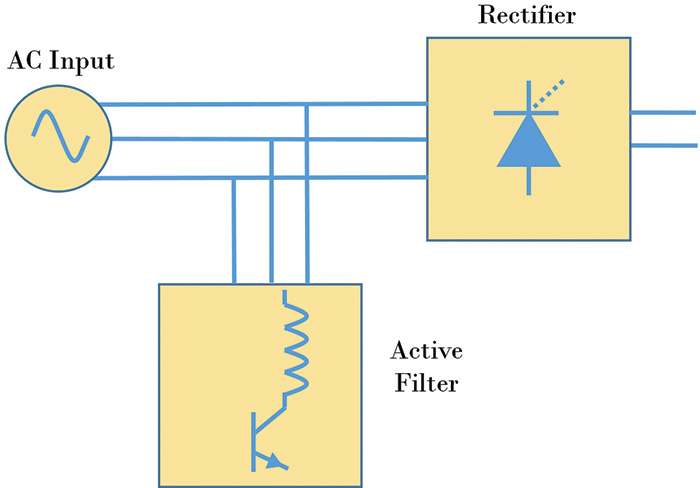 Figure 6. An active filter is a parallel device that goes in parallel with one or more VFDs.

Reviewing the possible VFDs and their associated harmonics content provides this tabular form of data and some estimated costs for each (see Table 1).

Putting It All Together

To obtain the best overall harmonics mitigation solution, the end user must view the system as a whole circuit and consider different combinations of mitigation products that could be used to prevent a power quality concern. For example, a company with a bank of 10 40-horsepower (HP) VFDs might find purchasing a large 400-HP passive filter more economical than individual filters at each VFD. If that same bank of 40-HP VFDs were on booster pumps that vary speeds (thus a varying load) throughout the day, an active filter would perform better because it is not load-dependent.

At the service entrance of the building, is there a filtering method to support the entire structure—including harmonics created by high-efficiency lighting and computing equipment as well as VFDs? Quite possibly some loads can alter other load harmonics. If only a singular VFD is taken into account, the solution may seem cost prohibitive when spanning a mass of VFDs.

This is why it is best to consult with a professional who is not concerned with his or her product being the solution. A non-biased approach can look at the overall system and offer recommendations for unraveling and solving the issues. Simulation tools and measurement devices can also help when predicting and passing power quality requirements from the utility provider.

Jeffery Lovelace, P.E., is the chief engineer for National Power Quality and Consulting LLC in Houston, Texas. Lovelace has 20 years of experience with VFDs, automation systems and power quality analysis. He may be reached at jeff@natpowerquality.com.