Cloud-Based Monitoring & Control Is an Alternative for Irrigation Systems

The “Internet of Things” (IoT) was a term coined by Kevin Ashton in 1999. The term was used to describe the phenomenon of machines and devices being connected to each other and people. It was forecast that the next stage of exponential growth in the evolution of the Internet (beyond personal computers and mobile phones) would be connecting the 50 billion devices and machines on planet earth.

Flash forward to 2014, and Kevin Ashton’s vision is becoming a reality. Between 2011 and 2014, the number of connected devices increased from 2 billion to just more than 5 billion. Research by the Gartner Group estimates that the installed base of connected devices and machines will grow to 26 billion units by 2020. Considering how many people’s daily lives have changed, this trend is apparent. Today, it is difficult to purchase a new television that is not Internet enabled. Likewise, Google’s $3.2-billion acquisition of Nest early in 2014 suggests that connected thermostats are not a fad but are here to stay.

What does the “Internet of Things” mean for the pump and controls industry? Is IoT just a new buzz phrase for SCADA? 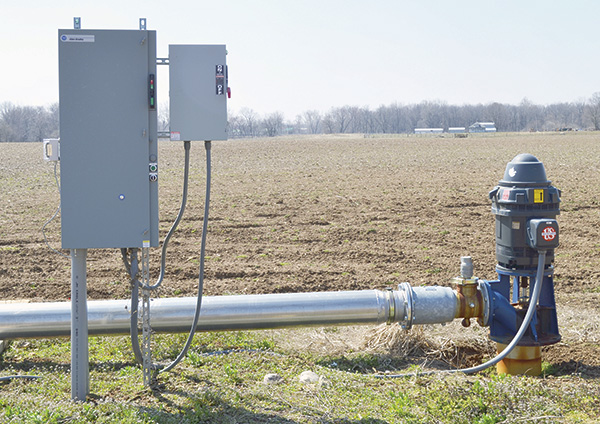 Assessing the impact that IoT might have on the pump and controls industry begins with understanding the principle differences between modern machine-to-machine communications and more traditional supervisory control and data acquisition (SCADA) systems.

For well-capitalized organizations with large-scale, mission-critical pumping operations, traditional SCADA will be the likely model for years into the future. An organization, such as a large oil and gas operating company, will demand a highly secured and tailored solution so that its remote monitoring needs are not sacrificed.

However, these requirements are not universal among all end users of pumps and controls. Additionally, not all end users have the capital, human and technical resources to use SCADA. They also do not have mission-critical requirements. End users who fit this criteria can look to the “Internet of Things” because IoT is essentially democratizing remote monitoring.

Agriculture is one example of an industry that may benefit from machine-to-machine communication. The most recent U.S. Department of Agriculture Farm and Ranch Irrigation Survey indicates about 800,000 pumps operate in agricultural irrigation. Each year, between April and August, irrigators typically spend one-third of their day driving to and from each of their irrigation systems to ensure that the equipment is functioning properly.

In a state such as Arkansas, farmers typically manage 20 to 40 irrigation pumps. In this situation, pumps are often spread throughout 10 square miles, and a SCADA system would be convenient and would simplify operations. However, the upfront capital costs and technical expertise required to support it do not create a compelling return on investment. This limitation has changed in recent years because cellular data coverage has expanded to rural areas, and stand-alone remote terminal units (RTUs) are connecting equipment directly to the Internet via the cellular network.

Additionally, the increase of smart phone and tablet computing has simplified the distribution and consumption of software, increasing the value proposition. The days sitting in front of a dedicated workstation to remotely monitor equipment have ended. Likewise, modern RTUs have become event driven. End users can receive proactive text messages or push notifications when critical pumping conditions occur. An additional benefit of this decentralized model is that little to no upfront capital investment is required. A farmer can simply add or remove RTUs for the pumps as needed.

IoT also brings intelligent logic to the cloud rather than placing it on isolated programmable logic controllers (PLCs) and/or proprietary servers within a private network. Once the bulk of the logic is entered in the cloud, it allows for many integration possibilities and flexible business rule changes. For example, suppose 2,000 irrigation pumps are connected by RTUs within the same rural county, which has a dedicated electrical utility provider, and the utility provider changes its kilowatt-per-hour rates for peak pumping times. A cloud-based system could more easily interface this data and make intelligent irrigation scheduling recommendations to present to the farmers. Taking that idea further, it could intelligently control the pump to optimize efficiency. Weather data, crop yields and water tables may all be factored into the equation for further optimization.

The market sizes of the applications for which SCADA is not always appropriate are significant. Another area is the 15 million households in the U.S. that use groundwater wells for their household water consumption rather than a public utility. These households pump water every day, and little intelligence into their pumping habits and associated effects on the water table are available. Residential grinder pumps also represent a significant opportunity for remote monitoring. Sewage overflow can be catastrophic to a homeowner and having a device, such as a grinder pump, accessible through a smart phone is as critical as being connected to a home security system or thermostat.

As all the grand visions of connected pumping systems are considered, it is important to remember that the democratization of remote monitoring within pumps and controls has just begun. The first step involves equipping existing pumps and controls (within the appropriate market segments) with affordable RTUs that upload the bulk of the monitoring and control logic data to the cloud. Today’s challenges involve making the devices simple and robust enough for industrial applications and creating scalable distribution models so that the “network effect” ultimately produces positive externalities.

Unlike other remote monitoring technologies that have acquired critical mass during the last few years in other industries, pumps and their associated engines or electrical control panels are typically serviced by skilled technicians. For a critical mass to be reached, this distribution limitation may need to be considered. Pump systems that operate on 120 volts may become connected to the Internet at a faster rate than systems that operate on 480 volts because of the skill level required to comfortably work inside a 480-volt control panel. Such constraints should be considered as pumping system monitoring and control are transitioned to the cloud.

SCADA has been beneficial for many verticals within the pump and controls industry for more than 50 years. Several end users within these verticals, such as agricultural irrigators, have been underserved because of the costs and complexity of the systems and the segments less critical functional requirements. Evidence suggests that the IoT is democratizing remote monitoring across other market segments and can potentially link disparate systems with greater ease, ideally producing long-term economic value.

Edward DeSalle is the CEO and founder of Net Irrigate, a manufacturer of wireless irrigation monitoring technology for the agriculture industry. DeSalle is an alumnus of the Kelley School of Business at Indiana University where he received his MBA with a focus in new product marketing and management. He may be reached at edesalle@netirrigate.com or 800-961-9549, ext. 55.