My previous two columns have described assessing a system that does not use controls. In the first part (Pumps & Systems, October 2014) the assessment process was detailed. Last month, I covered performing the system calculations (Pumps & Systems, November 2014). This column considers the proposed improvements to the system (see Figure 1). 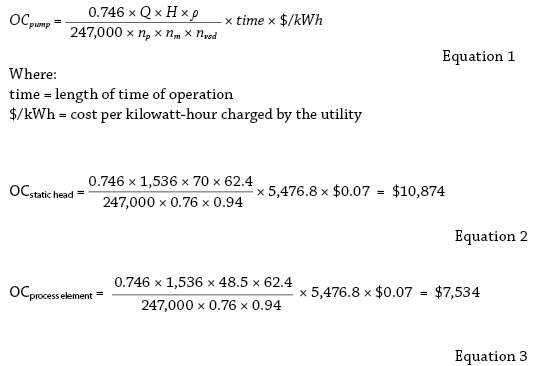 The next step is determining the annual cost for the process elements in the system. These include the static head needed to fill the batch tank, the losses across the process component BTF-01 and the head loss in the pipeline.

The differential pressure across BTF-01 is 21 psi, resulting in a head loss of 48.5 feet of fluid. Using this value of head loss, the operating cost for the process element is determined using Equation 3.

The pipelines are the only other process elements. Because no control elements are used, the pipeline operating cost can be determined by subtracting the sum of the static head and dynamic head of the process elements from the pumping cost associated with the fill operation.

This results in an annual pipeline operating cost of $16,766. The total annual operating cost for the process element during the fill operation is $35,174 per year. 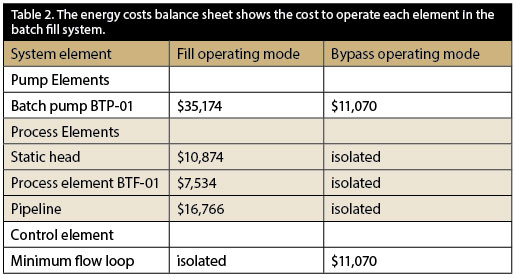 Use the Results for System Improvement

The batch fill system was originally designed to manually start the pump at the beginning of each fill cycle and stop the pump when the tank was full. Based on the energy cost balance sheet, the annual operating cost of the system as designed was $35,174 per year.

Shortly after the plant was placed in service, the operating procedure was changed. To fill the batch tank, the appropriate fill valve was manually opened. When the tank was full, the fill valve closed, and the pump bypass line automatically opened.

Operate the System as Designed

Plant personnel explained that the decision to run the batch pump in bypass was made to minimize the wear and tear on the pump and motor. With 8,400 hourly fill operations per year, the pump starts 8,400 times per year.

When starting an electric motor a large inrush of electrical current is needed to bring the motor up to speed. Inrush current can be up to seven times the normal running current of the motor. This results in excessive heating of the motor windings and stress on the pump, motor shaft and bearings. Motor manufacturers often place a limit on the maximum number of motor starts per hour to prevent damage. This was a factor in the plant’s desire to operate the batch fill in bypass mode.

A soft starter can minimize the inrush current. It temporarily reduces the line voltage to the motor, which reduces the load, torque and electrical current surge when starting a motor.

Plant personnel evaluated the operation of the batch fill system, motor and pump to determine if a soft starter could be employed. This would eliminate the need to operate the pump in bypass. The plant’s electrical equipment supplier confirmed that this would save $11,070 per year.

The system was originally designed to fill the batch tank in 45 minutes, providing the operators with a 15-minute margin. The results of the assessment indicated that the longest fill time was 40.6 minutes. The pump is then in bypass mode for more than 19 minutes. Removing the delay between filling one batch tank and starting the next fill cycle would reduce the pump flow rate.

To fill a 60,000-gallon batch pump in one hour requires a flow rate of 1,000 gallons per minute (gpm). This lower flow rate reduces the dynamic losses in the pipeline and across the process equipment. The reduction in head loss in the process elements results in less energy being supplied by the pump.

With a variable speed drive (VSD) installed and the pump operating at 1,333 rpm, the flow rate through the pump is 1,000 gpm. The head is 147 feet of fluid, and the pump efficiency is 78 percent. The manufacturer states that the efficiency of both the motor and VSD is 94 percent. Equation 4 provides the annual operating cost for the pump using a VSD.

This shows that the static head is still 70 feet. Based on the longer hours of the fill mode, the annual operating cost for the static head element is now $11,255 per year (see Table 3). A longer batch tank filling time reduces the flow rate, decreasing the head lost in the process elements and allows the pump to produce less head, reducing system operating costs. 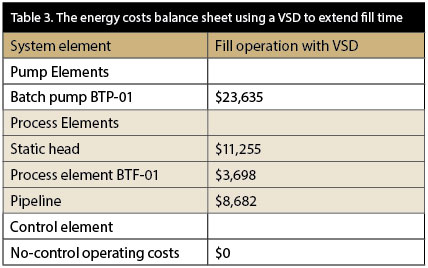 The energy cost balance sheet provides a clear picture of how the system operates. In my January column, a system pump that provides liquid to multiple process loads will be considered. If you have a system in your facility that you feel can be improved, send me an email. We can discuss making your pumped system the focus of a future article.

Instrumentation/Controls
Predictive Maintenance for Mining Vehicle Applications
How predictive solutions helped a mining equipment manufacturer solve issues before they arose.
Pumps
What Does Secondary Containment Mean?
For pumps, this term generally relates to sealless canned motor pump (CMP) or magnetic drive pump (MDP) types.
Pumps
U.S. Oil & Gas, Wasted Money & Strategies to Address Global Warming
Some European countries have made the switch from fossil fuels to renewable energy, but the U.S. is falling behind.
Instrumentation/Controls
The Key to Disruptive Technology: Energy Efficiency
Rethinking the water and wastewater industries to combat water scarcity.
Pumps
Using Piston-Actuated Diaphragm Pumps in Mine Dewatering
How these pumps are able to operate at higher efficiencies and pressures.