When a representative from a local distributor noticed a large amount of oil leaking from a semi-autogenous grinding (SAG) mill gearbox at a copper mill, he decided that a permanent solution to the maintenance issues caused by inefficient sealing methods was needed.

The distributor repeatedly noticed the leak on his regular visits to the site, a large copper mining and mill operation in the Southwestern U.S. The gearbox had been plagued with leak-related issues during the 10 years that he had called on the mill. Like many gearboxes, it included contact lip seals that tend to have a short and unreliable service life.

Because of the contact with the shaft to retain lubrication, they eventually wear at the point of contact or groove the shaft. As they lose contact, lubricant leaks at the point where the shaft enters the gearbox.

With this gearbox, an operational flood in the bearing housing compounded the difficulty. Unlike most gearboxes that splash oil into the bearings, the gearbox operating in this process included an oil pump that pumped oil into the center of the double row spherical roller bearings. This ensured continuous lubrication to the bearings, but also tended to throw oil toward the lip seal.

Oil that was attempting to flow back through the bearings to return to the sump was impeded, creating an operational flood. The operational flood placed additional pressure on the lip seal which increased the failure rate of the seals. The sealing solution for the mill needed to be able to perform in an operational flood and be installed onsite without decoupling equipment. 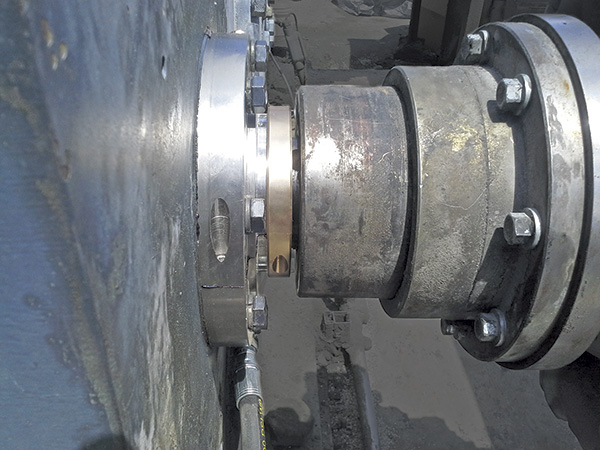 At the mill, the rising costs associated with using lip seals were becoming apparent. The lip seals on the SAG mill gearbox required replacement every three to six weeks. This procedure was expensive and time intensive because:

The gearbox was in a confined location that limited access to the shaft, further complicating the already expensive repair. Between scheduled maintenance, the leaking gearbox was causing a costly, messy and hazardous problem that was also an environmental concern. Large amounts of oil were wasted as it leaked directly to the deck below the gearbox, also causing a slip hazard that workers had to navigate carefully. In addition, workers had to add oil during each shift to replace what was lost because of the leak.

For many years, a leaking gearbox was considered an accepted cost of conducting business. In some facilities, a leaking gearbox is so commonplace that many end users do not recognize that it is a problem that needs to be corrected. The problem is often reclassified as a preventive maintenance task. However, it is not preventive maintenance if the same problem must be fixed every two to three weeks. Stricter environmental laws, an increased emphasis on safety and efforts to control costs are changing the way end users view leaking gearboxes. Permanent bearing protection products provide an opportunity to create a permanent fix.

High oil levels and oil splash make gearboxes notoriously difficult to seal, especially in industrial rotating applications. The lip seals commonly used to seal gearboxes have high failure rates and a short life expectancy, making them ill-suited for applications such as those at the mill.

A custom-engineered solution was the key to creating a permanent sealing answer to the mill’s sealing problem. A sealing/bearing isolator company’s design team was tasked with engineering the solution. The team had the experience to consider critical factors that included:

The custom seal for the mill is based on a bearing isolator. It is a non-contacting, complex labyrinth seal that consists of a stationary component (the stator) and a rotating component (the rotor). The stator has a large D Groove that captures the oil attempting to flow down the shaft and through a drain port. It channels the oil back to the gearbox sump. The rotor prevents outside contaminates from entering the gearbox by collecting them in the labyrinth.

Centrifugal force then expels the captured contaminants to the outside environment. The result is a permanent, non-contact sealing device that efficiently contains the lubricant in the gearbox, where it belongs, and preventing outside contaminants—such as water and dirt—outside the gearbox bearing housing.

To create the seal, a standard design was modified to accommodate onsite installation. It accommodated the operational flood application and addressed a drain-back system that was contributing to the oil leak. On many gearboxes, like the one at the mill, the drain-back scheme to scavenge the oil from the area between the bearings and the seal is not efficient.

In the past, many end users were not concerned if a gearbox leaked. However, in today’s industrial environment, the Environmental Protection Agency and Mine Safety and Health Administration place strict limits on the acceptable levels of materials, such as leaked oil, that can create environmental and safety hazards.

Onsite installation in the tight surroundings was accomplished by designing a split seal so that it could be installed in the field without decoupling the equipment. To enable the non-contact bearing isolator to work in the operational flood condition, the seal included a larger, optimal-sized D Groove to handle the volume of oil flowing through the system. The labyrinth seal also incorporated an external drain on the seal.

The external drain was designed to be plumbed back into the gearbox above the sump’s static oil level but below the bearings. This isolated the returning oil so that, on its trip back to the sump, it would not be impeded by the oil located between the bearings and the seal. The returning oil had free flow to the sump, and more important, oil no longer leaked from the gearbox through the seal.

Because the customized seal and drain-back system provide a permanent fix, the time and costs associated with maintaining this gearbox have been greatly reduced. Less scheduled maintenance results in more production time for the SAG mill. The environmental and safety hazards have been eliminated, creating a safer environment for personnel.

The two bearing isolators installed on this gearbox have been in operation for two years. Performance expectations continue to be met, and no signs of leaks have been detected. The representative from the seal manufacturer continues to check-in to monitor the bearing isolator’s performance.

George Gillespie is the Western United States and Canada general sales manager for Inpro/Seal LLC. Having provided custom-engineered sealing solutions from Inpro/Seal for the past 15 years, he has more than 34 years experience in the maintenance and repair of rotating equipment. He may be reached at info@inpro-seal.com. Inpro/Seal manufactures sealing solutions. For more information, please visit www.inpro-seal.com.