The Dangers of Hot Bolting

David Dunning is a Cornell University professor who is perhaps most famous for a paper he co-wrote about ignorance and over-confidence. The Dunning-Kruger effect refers to people who are novice or ignorant to things they do not know but believe they are experts. The best example involves people who take a test on a subject they know very little about and receive a low score while believing they should receive a high score.

This effect has been studied and linked to many situations, but it can be a serious danger when it occurs in maintenance practices. Around the world, good maintenance practices have been poorly taught and communicated, and some ideas are unsafe and have no foundation in practicality. Still, they are handed down as the standard operating practice. This can have worse consequences than most Dunning-Kruger effects—it could be life-threatening.

One unsafe practice in the pump industry that personnel often conduct without reviewing best practices is hot bolting. Hot bolting is the act of tightening a bolted connection while the bolted joint assembly (flange/heat exchanger/manway) is in operation. It might seem like common sense to not tighten bolts containing hot fluids or gases, but supporters of this practice often say, “We always did it that way.”

There are many documented stories of hot-bolting accidents, but one notorious case happened in Sodegaura, Japan, in 1992. A hot-bolting operation on a heat exchanger was being conducted during startup at a gas oil hydro-desulfurization unit. The gasket-retaining ring slipped during this operation, causing a massive explosion and the loss of 17 lives.

After a detailed root-cause analysis was conducted, it was determined that the hot bolting was ordered because of a leak at the joint resulting from a loss of bolt load. The decrease in the bolt load was caused by a difference in thermal expansion rate between the bolt material and the flange material.

Bolts can only compensate for a small amount of “travel” from the stretching of the bolt. This small amount was reduced below the sealing minimum load by the thermal growth differences in the materials. This is a good example of the Dunning-Kruger effect: The operators did not see the dangers of tightening the bolts while in operating condition, and they did not previously look at using devices that allow more bolt travel. 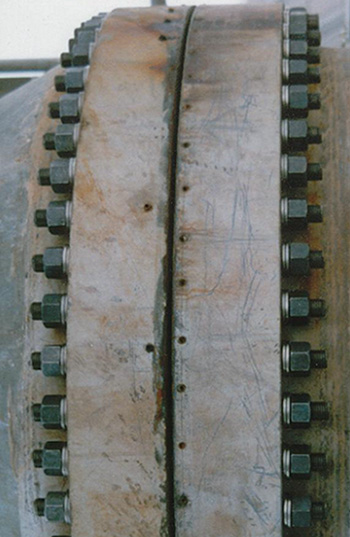 Image 1. The use of conical washer springs between the bolts and gasket flange (Images courtesy of the author)

Flange springs have been used specifically for addressing these types of differential thermal expansion problems. They are designed to provide more travel while maintaining bolt load during thermal cycling. The root cause analysis report in the previous example emphasized the condition “of repeated warming and lowering of the temperature. The bolts alone could not perform their original purpose of absorbing the extra strain generated by thermal expansion.”

Flange springs work on the principle of stored energy. This is accomplished by extending the bolt load loss decay curve by using springs. The same concept is at work when one opens a jar of peanut butter and, after applying a large amount of force/torque on a portion of the first turn, the entire load is then released in only a small amount of travel with the lid. If you put a coil spring that has twice the height of the jar under the lid inside the jar when you loosen the jar, you get resistance throughout the travel of the jar’s threads. This occurs all the way until the jar comes undone with the top thread. The load is diminished from the bottom thread to the top thread (this can be regulated by the strength of the spring). However, the load curve is a lot more consistent compared to using no spring at all. Image 1 (page 55) shows an example of the use of conical washer springs on a gasket flange.

There are countless examples that demonstrate why bolts do not provide a sufficient load under operating “hot” conditions. It can be because of the use of outdated tightening methods. It can happen by using torque wrenches incorrectly, if at all. It could be that the wrong torque was calculated from using the wrong anti-seize thread friction factor, the K factor. All of these issues are outlined with remedies in the FSA gasket manual and the American Society of Mechanical Engineers (ASME) PCC-1. 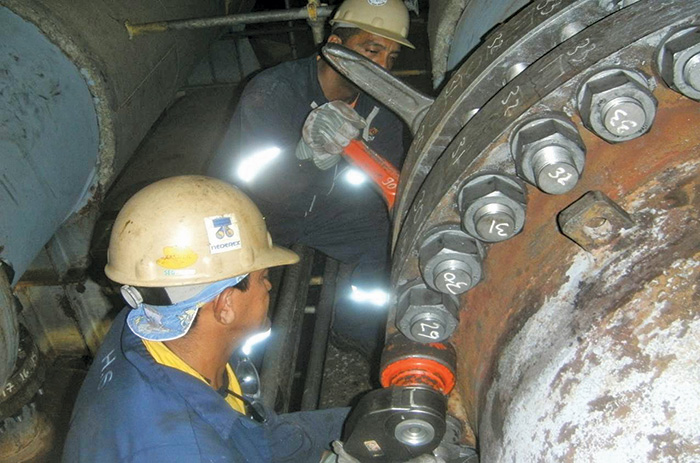 Not only is hot bolting or torquing a serious safety issue that has caused deaths, but it is also hard to understand how accurately it can actually be performed. One factor usually not taken into consideration in performing hot bolting is the dried anti-seize under the bolt and on the thread. A frequently overlooked issue is that dried anti-seize does not have the same K factor wet versus dry. Furthermore, a dry anti-seize K factor is extremely hard to predict. If during hot bolting the wet torque value is used on a dry joint, less load will actually be applied on the joint because of the change in K factor.

Another issue has to do with the fact that the strength of the bolt decreases at elevated temperatures and can result in bolts breaking and causing massive failure. Once again, the Dunning-Kruger theory is seen here. Personnel can seriously compromise the safety of the joint if they do not understand the factors affecting the load applied by the bolt or its strength at elevated temperatures, and if they tighten a heated bolt.

When the term hot bolting is used by the ASME and others, they specifically refer to de-pressuring the equipment, loosening the bolts and reapplying anti-seize so the proper K-factor value can be used in the torque calculation. This particular practice, however, is essentially a reactionary maintenance procedure; the best method is to conduct the proper analysis beforehand. This will ensure that you have enough travel in the joint (adding flange springs if needed) and the target load is being correctly provided under all conditions.

The best way to eliminate the Dunning-Kruger effect in our industry is training. Tribal knowledge can sometimes be incorrect. Maintenance work compared with office work is radically different because it can result in serious injury. Using best practices and continuing education conducted by people who are trustworthy is key.

Ron Frisard is a field project manager for the A.W. Chesterton Co. He has more than 25 years of experience in the application and design of compression packing and gasketing. He can may reached at Ron.Frisard@chesterton.com.

Seals
Expansion Joints in Food & Beverage or Food Processing Applications
An introduction to expansion joints and their uses in food and beverage applications.
Seals
Cost Considerations When Selecting Sealing Solutions for Boiler Feed Pumps
The importance of planning for the full life of your sealing solution.
Seals
Why Legislators Should Narrow the List of Dangerous PFAS
In this report, the Fluid Sealing Association explains that not all chemicals in this category are dangerous, namely polytetrafluoroethylene.
Seals
Selecting Seals for the Uptick in Upstream Oil Production
How to achieve efficiency, productivity and safety.
Seals
Applying Proper Fluid Sealing Techniques in Industrial Water & Wastewater Applications
Optimal fluid sealing reliability is possible when the correct sealing system technology is applied.