If the old saying “Build something better and people will buy it” is correct, then a new bearing housing design will be of interest to those focused on reliability.
by Heinz P. Bloch
Process Machinery Consulting
01/18/2017

When MPP (not his real initials), a manager for a process pump manufacturer, told me his company was working on the thrust chamber design for its new horizontal pump, I was interested. After all, millions of process pumps would benefit from improved lubricant delivery and better bearing housings. So, in early 2016, I was pleased to respond to his query.

MPP mentioned that the company’s pump speeds varied from about 1,800 revolutions per minute (rpm) to 4,200 rpm. Typical operation is at 3,600 rpm.

The manufacturer’s goal was to design a superior “ball bearing thrust chamber” that could handle a force of up to 10,000 pounds (44,482 Newtons) of axial load.

MPP and his team were considering three angular contact (7315) ball bearings to achieve this unusually high load capacity for a process pump. The inboard bearing could be either a typical deep-groove radial or an angular contact type to handle any minor short-duration reverse thrust action in the normally inactive direction.

MPP communicated the following five other questions related to lubrication:

Because I know the end user’s mode of operating and maintaining pumps, I hesitated to recommend triple angular contact bearing sets1 for MPP’s new horizontal process pump. I imagined the purchaser’s hard-pressed reliability technicians trying to ascertain and supervise the proper installation of matched-bearing triple sets after explaining their cost to the global vice president of modern supply chain management. Triple sets require the expenditure of much more than the customary training, educational effort or maintenance money allocated to pumps at most plants.

Flexible flinger discs were developed for snap-open insertion into bearing housings with openings/bores slightly smaller than the disc diameter. The original manufacturer of the Viton flinger disc later discontinued this product for economic reasons. The plastic discs that allow high peripheral speeds will not deflect much, and the ones that allow much deflection will not permit high peripheral speeds. In contrast, contoured metal discs similar to the straight one shown in Figure 1 are found in a number of thoroughly engineered pumps. 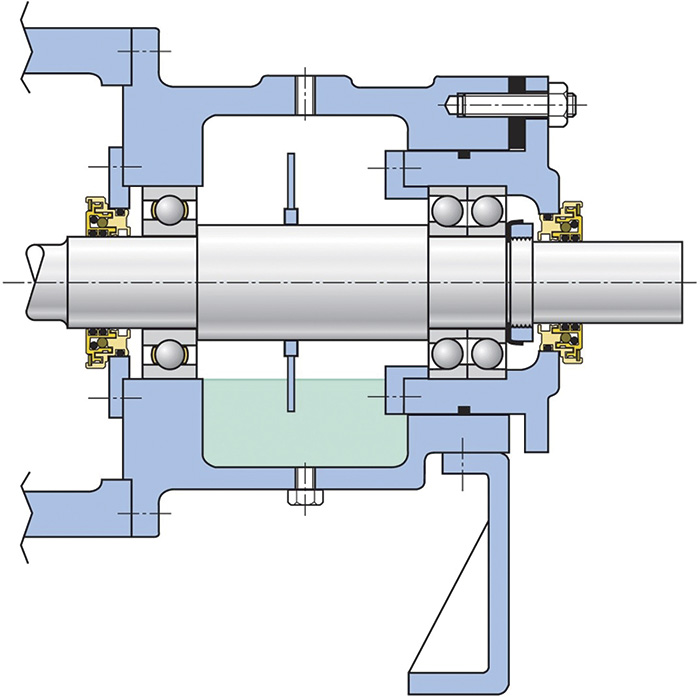 Figure 1. Simplified view of a pump bearing housing with oil splash provided by flinger disc. The large disc diameter makes it necessary to place the thrust bearing set in a removable cartridge. Notice the bearing housing protector seals at both ends. (Courtesy of the author)

Usually made from stainless steel, flinger discs are commonly used in Europe and require different contours for particular pump models, sizes or shaft speeds. Because these discs are partially immersed in the lube oil, a number of variables influence which contour and geometry to select. The wrong contour will agitate and shear the oil and can cause temperature increases and thinning of the oil.

Curved discs, in particular, provide a refresher on the laws of physics. A droplet of oil moving toward the tip of a quasi “rotating frisbee” will have a small axial velocity component. However, gravity will ensure that centrifugal force—and the radial component—predominates.

Putting it bluntly, our hopes and expectations are (again) overruled by the immutable laws of physics. Sir Isaac Newton was right.

Regrettably, many end users (and a few manufacturers) in the U.S. put considerable faith in the one-size-fits-all approach, which is found in many oil rings—perhaps the lowest cost and least reliable means of transporting oil from a static sump into sets of bearings. Well-engineered flinger discs may require the bearings to be located in a removable cartridge, which increases the initial cost of the pump, but they can pay for themselves in a short time.

If I had any say in the matter of reliability-improving pumps, the shaft portion located between the pump’s thrust bearing set and its deep-groove radial bearing would drive a small pump.

This small pump would be internal to the bearing housing. The pump would take suction from the oil sump and force the oil through small nozzles directly into the bearings.

Anticipating user concerns regarding the reliability of such a housing-internal small oil pump drive, I would ask these skeptical individuals to study the reliability statistics of shaft-driven mechanical governors in small steam turbines.

In 63 years of owning all sorts of automobiles, I have never experienced the failure of an oil pump.

Either oil mist or pressurized oil delivered through a small nozzle will serve a set of 75-millimeter bearings at 4,200 rpm with little risk. In this case, I would not advocate anything similar to MPP’s proposal. We can only hope that someone will do it right instead of simply tweaking components here or there.

A set of truly advanced and well-engineered bearing protector seals should be part of “doing things right the first time.”

Finally, no process pump with rolling element bearings still requires the oil to be cooled. With a reasonable pump bearing housing oil sump capacity and the proper oil, the many thousands of pipestill bottoms and other hot service pumps in modern refineries have yet to see oil temperatures above 190 F (88 C). The product in some of these pumps is at 750 F (399 C), and still not a single one will ever need a properly selected synthetic oil to be cooled.

In some pump bearing housings, cooling introduces water vapor condensation. Many major oil refineries discontinued cooling water on rolling element bearings in the 1960s. Books and articles have been written on the subject.

Unfortunately, that was all the time I could find to communicate with MPP. Perhaps working with a knowledgeable consulting engineer would reduce his development cycle.

I did not dare recommend four hours of reading, which, nevertheless, might shorten the development time by several orders of magnitude and save tons of money.

If the old saying “Build something better and people will buy it” is correct, then a new bearing housing design will be of interest to those who are focused on reliability.