Power factor (PF) is an important component of an alternating current (AC) circuit, but understanding its actual effect can be difficult. Why is PF mysterious to many of us? It has to do with the way it is explained.

Isn’t a watt a volt-amp? Maybe not, if those amps are imaginary. Another explanation uses a vector triangle to show the relationship of real, reactive and total power. This can be useful to some, but confuses others. Most simply, PF can be defined as the cosine of the phase angle between the voltage and apparent power.

When I presented my AC Power and Motors seminar in the late 1990s, I used some of the information above to explain power factor. The result was that some of the audience gained an understanding, but the majority did not. In 2007, I changed how I presented the topic. Today, the majority say that they understand it, but a small minority still do not.

Although the results were not perfect, they are better than they used to be. I will use my current approach in this column. Although several inductive devices contribute to PF, this column will discuss AC motors. Rather than power, the rise and fall of voltage and current during the AC cycle will be the focus. The illustrations are from my current AC power and motors seminars.

What Is Power Factor?

Although the additional amperage is not consumed by the motor, the utility still must provide it or the motor could not operate at full load. Successful motor operation is “a tale of two currents,” in that two types of current are required: the load current, which performs work; and the magnetizing current, which initiates a magnetic field in the stator.

The motor uses load current to do work. The load current increases or decreases based on the actual load on the motor. It is never zero, even when disconnected from the load, because of the friction and windage associated with the rotor and bearings.

Figure 1 shows one complete AC cycle (360 degrees). The blue curve is voltage, and the other three curves are the load currents at various motor loads. The current at all loads rises and falls synchronously (in phase) with voltage and reaches its peak values at 90 and 270 degrees. At any point during the cycle, the power in watts is equal to the product of volts and amps because it is a true resistive load. 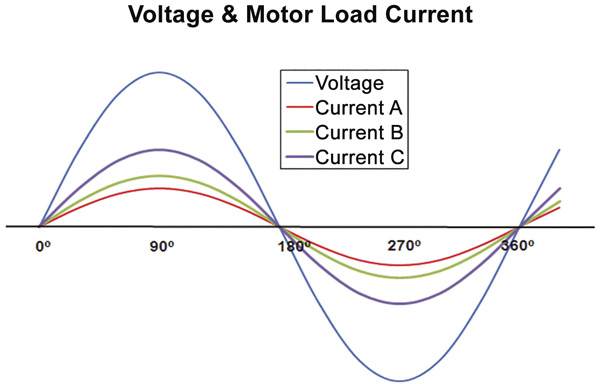 Figure 1. Load current versus voltage (Graphics courtesy of the author)

Even during the negative portion of the cycle, the product of a negative volt (V) and a negative amp (A) produces a positive watt (W). The load power (W = VA) is often referred to as “real power” and is measured by the utility company’s kilowatt-hour (kWh) meter.

The current required to initiate a magnetic field in the stator behaves differently. It does not flow synchronously with voltage. Figure 2 shows the voltage and magnetizing current during one full cycle. The current lags voltage by 90 degrees and peaks at 180 and 360 degrees. 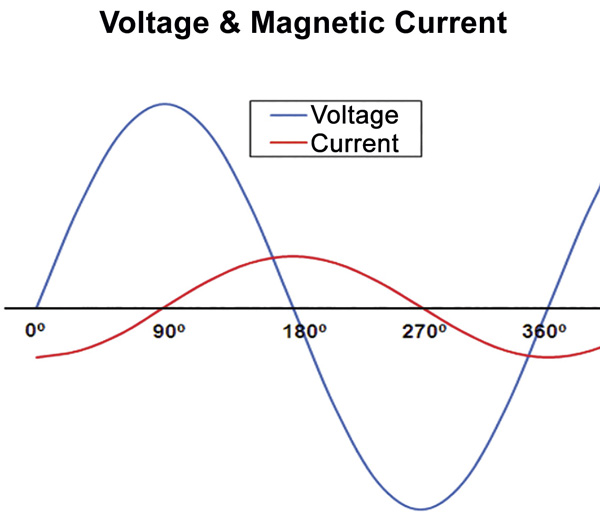 Magnetizing current uses no energy to build the magnetic field because it is returned to the circuit when the field decays. The amount required depends on the motor design, but unlike load current, it remains relatively constant regardless of the motor load. Magnetizing current is often referred to as reactive, imaginary or borrowed power. A standard kWh meter does not measure this current because it is out of phase with voltage. The next section will explain how the combination of varying load current and constant magnetizing current causes PF to vary from its nameplate value.

How Is Power Factor Calculated? 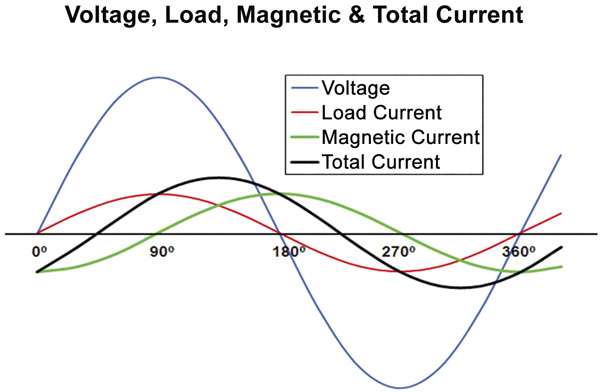 The black curve in Figure 3 is the total current—or the sum of the load and magnetizing currents at any point in the AC cycle. The product of total root mean square (RMS) current and voltage is often called apparent power. In this example, the total current peaks at 135 degrees, or exactly halfway between the load and magnetizing peaks. This places it 45 degrees to the right of the voltage and load current peaks.

The phase angle between total current and voltage is 45 degrees, and the cosine of this angle is the PF. Therefore, PF equals cosine 45 = 0.707 (or 70.7). PF is simply the percentage of the total current that actually performs work. From a power perspective, it is the percentage of the apparent power (kVA) that performs work. Power factor is also the ratio of load power to apparent power (PF = kw / kVA).

Earlier, I said that load current varies with the motor load, but magnetizing current remains relatively constant regardless of the load. The PF on the motor nameplate is the measured PF at full load. When the motor load is reduced, the total current will peak further to the right of the load current and voltage peaks. This increases the phase angle and lowers PF below the value shown on the nameplate. As motor load increases, total current will peak closer to the voltage peak and PF increases.

In my October column, I will discuss the major effects of low power factor and how it can be improved by capacitive reactance.

Joe Evans is responsible for customer and employee education at PumpTech Inc., a pump and packaged system manufacturer and distributor with branches throughout the Pacific Northwest. He can be reached via his website www.PumpEd101.com. If there are topics that you would like to see discussed in future columns, drop him an email.