Before the U.S. government passed the first Clean Air Act in 1963, no federal regulations on gaseous emissions existed. The Clean Air Act initiated research to investigate techniques to monitor and control air pollution. During the 1970s and 1980s, the government passed legislation that established a limit on emissions of 10,000 parts per million (ppm) for gases defined as volatile hazardous air pollutants (VHAPs). Similarly in Europe, a series of accidents resulting in toxic chemical release lead to adoption of the European Commission directive 82/501/EEC targeting safety measures to prevent the release of hazardous chemicals.

This threshold came down to 1,000 ppm in the 1990s. In some cases, these emissions restrictions were driven even lower by local authorities. The sealing industry has always worked to provide innovative solutions to meet the goals of the regulations and industry.

Low-emissions mechanical seals were first introduced to industrial rotating equipment in the 1980s as single seals with seal face designs and balance ratios optimized to reduce leakage. This design became an effective low-emissions solution that could limit emissions to a few hundred ppm. Single seal reliability typically depends on the process fluid. With a life span of several years, these seals can exhibit leakage variability.

Because all seals depend on the migration of fluid between the seal faces for lubrication, true zero emissions control is generally not possible with a single seal. Single seals also pose the risk of high emissions resulting from seal failure because they lack a secondary line of defense to contain leakage. As local emissions regulations became stricter throughout the country (as low as 50 ppm), the seal industry searched for a sealing solution to further limit emission levels. This led to the development and widespread use of unpressurised and pressurized dual mechanical seals, later defined by API 682 as Arrangement 1 (single seal), Arrangement 2 (unpressurized dual seal) and Arrangement 3 (pressurized dual seal).

An Arrangement 2 dual unpressurized seal (see Figure 1) uses a secondary set of seal faces to prevent process fluid from escaping. Arrangement 2 seals are two single seals arranged in series and installed into one seal chamber. The cavity between the two sets of sealing faces is vented to a flare or vapor recovery system, which prevents the cavity from building pressure. Table 1 lists support systems standardized by API 682 and used to maintain the cavity environment for Arrangement 2 seals.

An Arrangement 2 seal can run on a liquid or gas buffer designs, also called containment seals, that have either dry contacting or non-contacting seal faces. These dual unpressurized seals are designed to contain and direct process leakage to a waste area for recovery or safe disposal. Dual unpressurized seals provide a margin of safety because the outer seal acts as a true backup seal, while the inner seal sees the rigorous operating conditions and high pressure drop across the seal faces. Testing has proven that dual unpressurized seals can achieve emissions control below 50 ppm. Although emissions into the buffer cavity are low, plant operators must manage vent and buffer systems properly to ensure emissions are properly recovered. 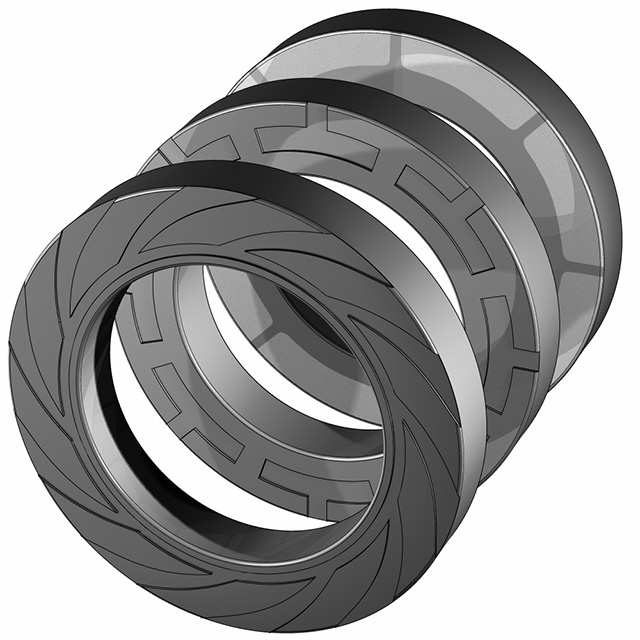 This revolutionary achievement led to the implementation of gas seals in a variety of applications. Compared with dual wet seals, dual gas seals generate little heat or wear because of face separation, use simpler support systems, and, in many cases, use an inert gas such as nitrogen as the barrier medium. In addition, the support system does not require fluid circulation. Dual gas seals also effectively use less energy consumption than their liquid counterparts because of the absence of friction between the seal faces. Users must implement proper instrumentation to ensure the barrier gas is clean and properly pressurized higher than the process at all times.

Long-term reliability of any dual mechanical seal and the achievement of zero process emissions are strongly dependent on the lasting reliability of the support system. Dual gas seals also effectively use less energy consumption than their liquid counterparts because of the absence of friction between the seal faces.

Over time, the seal industry has developed a variety of innovative solutions—single, dual, wet and dry—to continuously reduce fugitive emissions. Emissions control has come a long way, from high-balanced single seals that keep emissions below 500 ppm to dual pressurized liquid seals allowing true zero emissions. Each type of seal—Arrangements 1, 2 and 3—are viable options for low-emissions sealing, but the sealing option selected will depend on the application. When selecting a seal for a zero emissions application, users must define the zero emissions criteria.

Acceptable emissions can take on a different definition depending on location and process fluid, as local government defines the acceptable VHAPs emission limit. Sealing solutions may become more elaborate as the total allowable emissions limit trends toward zero, but they are fully able to achieve the goal.