Who determines where pressure gauges are located in a pump system? How close to the pump should they be, and what happens if these rules are not followed?

For a small pump system, the impact on the evaluated resultant energy consumption (real versus assumed) may not be significant. However, for a large unit, the penalty on evaluated efficiency and perceived or real wasted energy can be in millions of dollars.

A good pump requires more flow and pressure while using less power. This type of operation indicates that the pump is running at or near its best efficiency point (BEP). BEP is the flow at which all the losses are the lowest. When a pump operates at or close to its BEP, it is more efficient, and its total cost of ownership decreases.

The formulas in Equation 1 are commonly used to calculate efficiency from measured parameters such as pressure, flow and power.

(Graphics courtesy of the author)

In real-world systems, pressure gauges are often positioned far from a pump, and measurements may not be the same as when the pump was tested by the manufacturer. Sometimes, gauges may be installed in the wrong location or be absent altogether (such as when end users assume that the pump suction pressure is equal to the tank suction height converted from feet to psig). 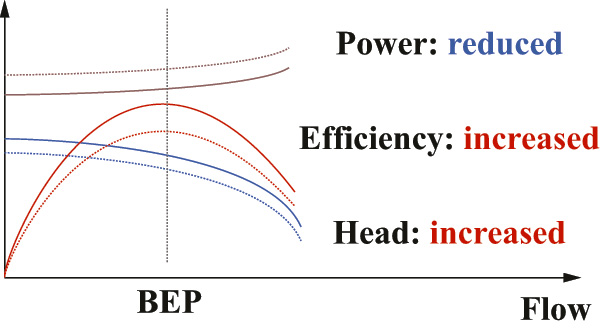 To understand the effect of incorrectly installed or absent gauges, consider the example below. To see the experiment, visit pumpingmachinery.com, click the Pump School link and watch video PVA-1.

In this example, two tests were conducted. One dropped the suction pressure in front of a pump by throttling the suction valve.

The second introduced a vacuum at the supply tank with the suction valve open. A pressure gauge was placed right before the pump, and a flow meter was placed directly after the pump discharge. These instruments helped determine the total dynamic pump head (see Figure 2), which is:

The pump system illustrated in Figure 3 could experience problems because the pump is placed far from the supply tank. Friction losses could result in inadequate pump head. Let’s look at the numbers (see Equation 2).

Figure 3. A system with the pump placed far from the supply tank

The 62 percent error indicates system inefficiency and wasted energy. As you can see, the impact on energy consumption does depend on the gauge’s position, and for a large pump system, the cost impact may be substantial.

A typical chemical plant uses thousands of relatively small pumps, averaging 25 horsepower (HP) or less. In a year, these small pumps may consume up to $17,520 in energy costs (where 25 HP equals about 20 kilowatts—kW), but a large boiler feed pump (5,000 HP, 3,730 kW) would consume more than $3.2 million per year.

However, a chemical plant with about 200 small pumps with similarly incorrect gauge readings would be just as bad as a single, large boiler feed pump in terms of energy costs. This means that wasted energy can result from a pump’s internal inefficiency (such as worn clearances) or incorrectly installed gauges.

If a pump has internal wear, additional wasted energy and associated costs would need to be added to the cost evaluated because of gauge issues. An end user can evaluate a pump’s proper efficiency (or inefficiency) with the Pump Energy Evaluator program at pump-magazine.com.

Dr. Nelik (aka “Dr. Pump”) is president of Pumping Machinery, LLC, an Atlanta-based firm specializing in pump consulting, training, equipment troubleshooting and pump repairs. Dr. Nelik has 30 years of experience in pumps and pumping equipment. He may be reached at pump-magazine.com.