While vertical turbine pumps are frequently used in agricultural installations, the combination of the pump’s minimal submergence needs, fixed location and drawdown effect can leave the installation unable to pump water for a portion of the year. In areas with widely fluctuating water levels, the problem worsens if the pump draws in enough mud and silt to impede irrigation. Multi-stage pumps address the problem, but because of their solids-handling size they have the added drawback of rocks kicked up in the flow stream.

In Colorado, one pump distributor solved problems with agricultural water transfer by employing a technology more often used in mining and oil field pumps. The end user faced all the challenges of topography, changing river beds, NPSHR and vastly fluctuating water levels, in addition to concerns about water rights in irrigating fields. 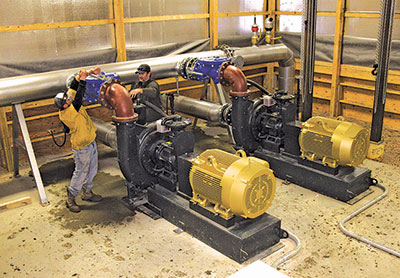 One of the biggest challenges was effectively pulling water out of the South Platte River, which has unstable banks and channels. A nearby project tried intake screens on the river bottom with compressed air cleaning. That project originally failed, but after adjustments, the setup performed successfully by using artificial damm­ing to submerge vertical turbine pumps.

Some users drill head gate wells close to a river to pump water uphill and away for storage, as these pumps do. However, underground pumping levels require higher horsepower. The water is also subject to a decrease in augmentation credit for water rights because not all the water is considered directly pumped from the river.

Beyond the logistical considerations, the end user needed a reliable pump system that would replenish water into the eastern Colorado aquifer while remaining within his water rights.

The water rights are extended by pumping and storing free water from the South Platte River—a proven method of banking water for future use. Sometimes the water can be confined to an underground alluvial basin and suffer no losses. More often, the water is introduced into the alluvium and slowly makes its way back to the river. In either case, pumping into the aquifer is a good storage strategy. 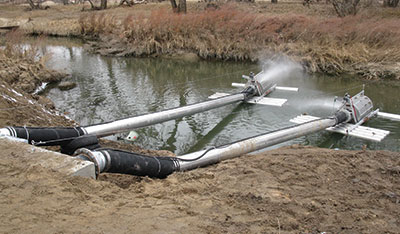 Water is screened efficiently with the floating system from the South Platte River and drawn through the underground piping.

The distributor set up two dry-prime, water transfer pumps so the suction strainer basket could adjust to rising and falling river levels.

If the pumps stop receiving enough water, they can reprime themselves. They are equipped with a system that allows priming to occur unattended. It does not require a manual shut-off valve to prevent water carry-over to the diaphragm vacuum pump.

The selected pump has a 4-inch solids-handling capability for rocks that might pass through the screen or easily moving silt.

By using two pumps, the system produces more than 7,000 gallons of water per minute at 120 feet of discharge head. They required only 6.77 feet of NPSHR.

The pumps are housed in a building away from the river, where they can be maintained and serviced with ease and comfort—rather than being directly over the riverbank and exposed to the environment. 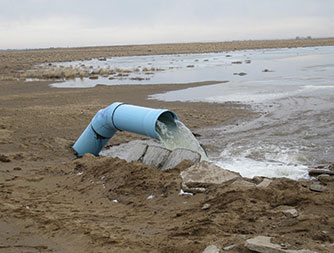 A specialized seal system keeps the back of the tungsten-face mechanical seals lubricated as the pumps prime water. None of the lubricant contaminates the pumped fluid.

A diaphragm vacuum pump pulling 50 cubic feet per minute on each pump primes the system rapidly. The pump end is 81 percent efficient at 1,200 rpm using 136 horsepower at the design point.

The pumps have soaked the aquifer with enough water for the next two years. The system saves thousands of dollars each year in energy costs when compared with a turbine. The repriming system works well and without an attendant needing to be present. Personnel can work on the pumps in a sheltered environment.

The end user reported that the system “primes well initially, reprimes as needed and complements pumps that are well-built and high in efficiency.”

The system continues to perform well, and in light of the ongoing drought conditions affecting the West, will pay dividends for years to come.

James Quillin is the Mountain West regional manager for Cornell Pump Company—a Clackamas, Oregon, manufacturer of centrifugal pumps for industrial, agricultural, mining, oil, gas and municipal applications. Quillin has more than 10 years of experience in mining and dewatering pump solutions. He may be reached at jquillin@cornellpump.com or 503-653-0330.