Here are the important takeaways from sessions attended by the Pumps & Systems' editors at WEFTEC Connect Day 4.

Are you concerned or interested? That was the question of the day at the session “Knowledge Development Forum Microplastics in the Water Environment: Should We Be Worried and Why?” The panel of experts—Christopher Wilson, Sarah Reeves, Belinda Sturm, Natalie Wick and Nicole Fahrenfeld—each spoke briefly on studies they’ve conducted and raised questions to the active and engaged Zoom meeting audience. 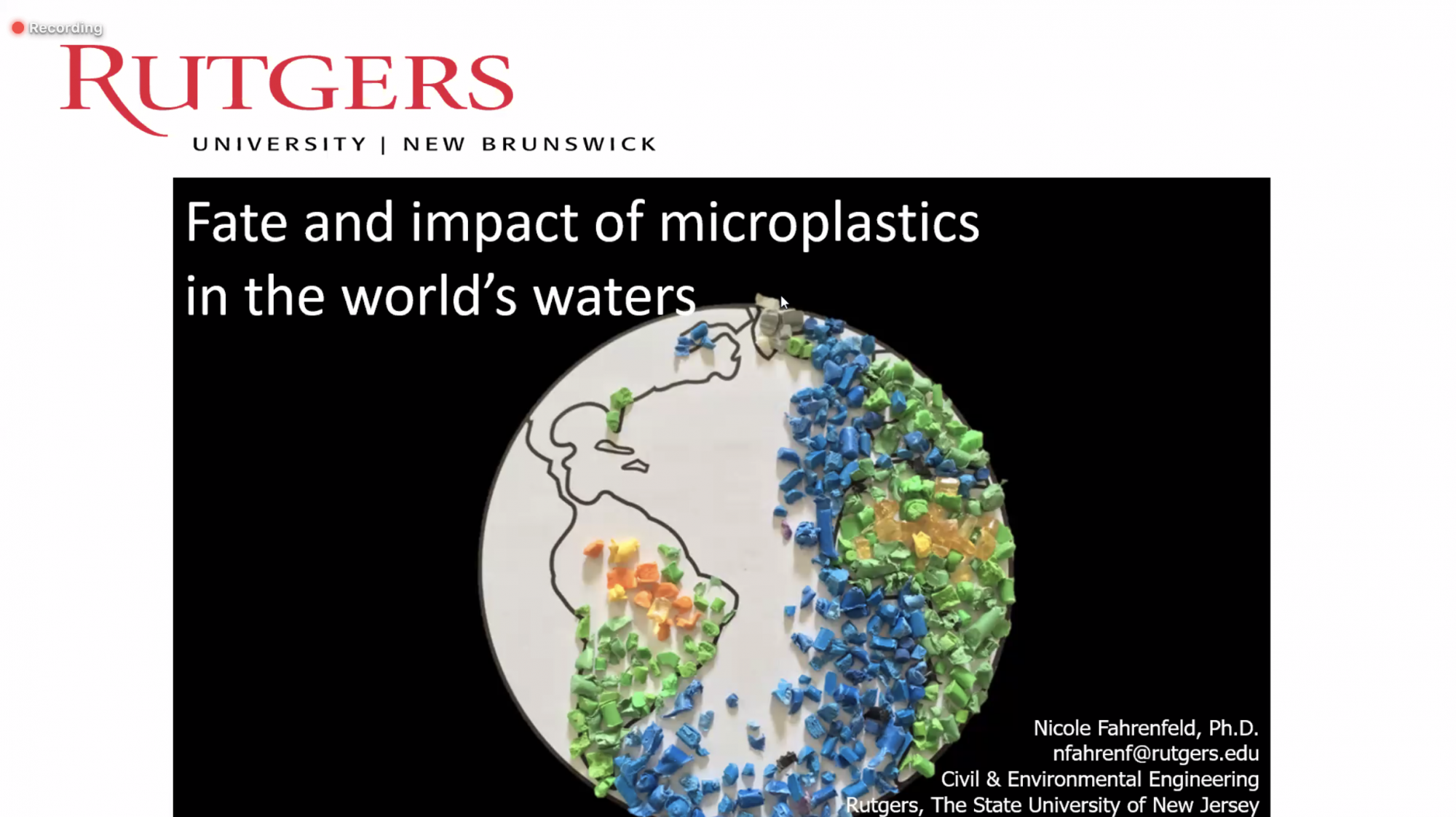 A few key facts at the start of the session:

Knowing what microplastics are and having done studies on how prevalent they are in our wastewater, Wilson asked the other speakers if they were concerned or interested for the environmental impact?

Fahrenfeld said that concern was a hard word for her to use until more research has been done, but she is definitely interested. The concern comes in due to a lack of standardization in testing. There are potential mechanical and chemical risks, but the quality of toxicity studies vary widely.

Wick said she was more comfortable with the word concern. In a study she conducted with Stiffen Krause and Christian Schaum, they took a sample of microplastics in sewage sludge, but the results of their study are hard to compare with other studies to confirm findings because of the differing sample volume, as well as different particle sizes and methods of analysis. “I am concerned because microplastics are everywhere, even in water that should be pure,” said Wick. She said there was no need to panic, but there was a need for more research.

Sturm quickly reviewed a study she conducted to try and understand the fate of microplastics across water resource and recovery facilities (WRRFs), including liquid discharge. How many microplastics come into a facility and how many are filtered out? Sturm’s study found primary clarifiers remove 70 percent of microplastics, and only 4 percent were discharged in influent. Sturm said there is a much higher concentration in dry biosolids. Seventy-six percent of the microplastics in influent were between 25 and 100 micrometers (μm). She said what concerns her are the nanoplastics she didn’t study. She wants to know about smaller particles and about other water sources. Sturm said stormwater and environmental runoff not captured by WRRFs are her main concern and that teams were already doing great work in wastewater research. Sturm said there are runoff and biosolid studies being done, but there was more work needed in that area. 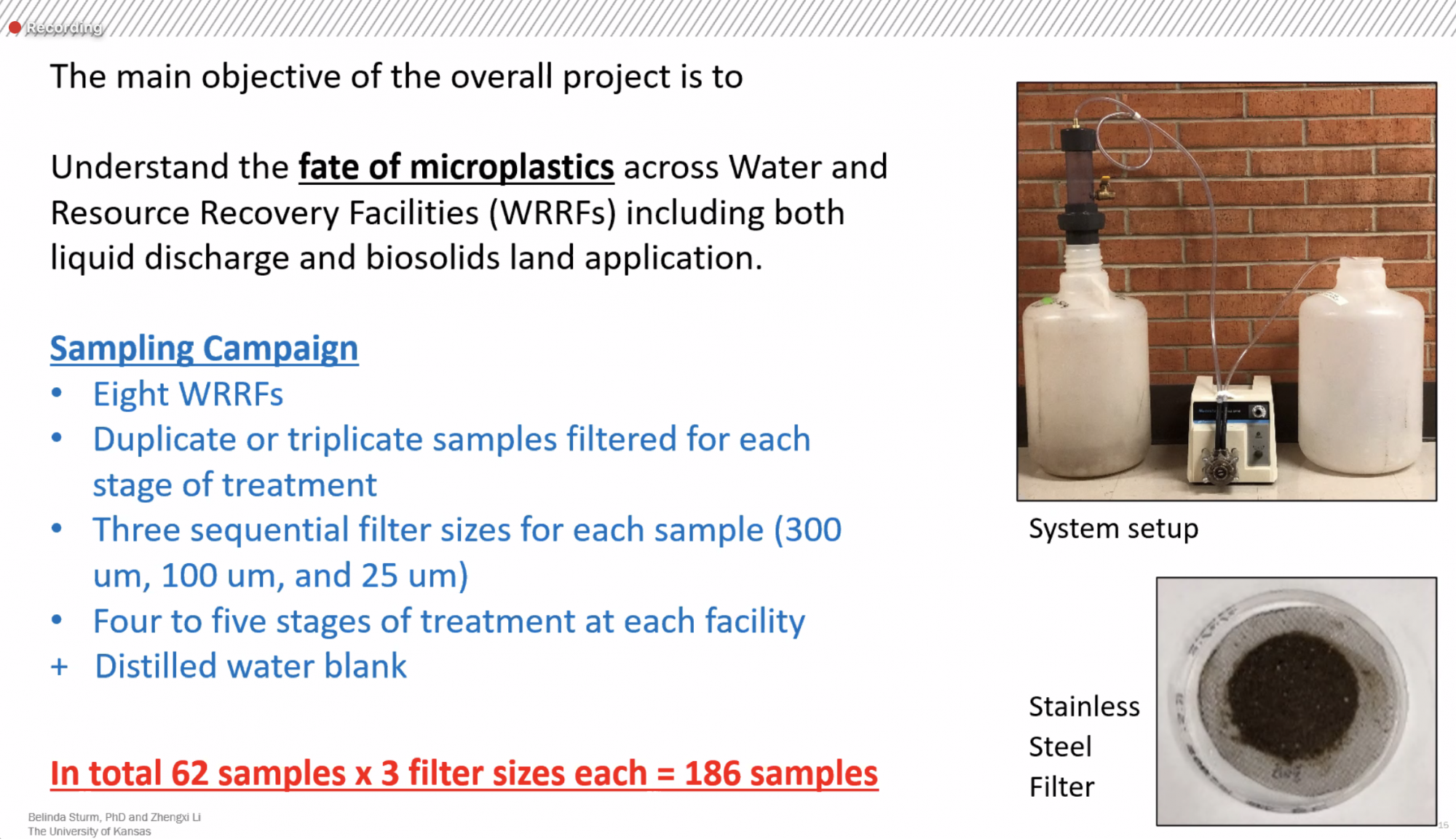 Wilson then asked the panel if (and the answer to this is unknown) microplastics are not toxic, do these studies even matter? The panel agreed that there is very limited data on how microplastics affect humans, but it wasn’t necessarily their toxicity that could be the issue. There is a potential of crossfeeding that could result in ecological impacts that are not specifically tied to toxicity. “We could be hurting photosynthesis and primary producers,” said Strum.

While there has been reporting of consumer concern with microbeads in things like facial and body scrubs, the panel said it is really the fibers, fragments and stray plastics that are more likely to cause an issue.

Viewers, including Helene Baribeau from Brown and Caldwell, discussed regulations that are taking shape to prevent microplastics in drinking water, specifically in California. The panelists said their issue with regulations around microplastics is that we are trying to police them before we understand them and before we know at what step in the process they can efficiently be regulated.

The forum ended with one unanimous conclusion: There is more work to be done in the research of microplastics in all types of water, including wastewater.

When asked about some of the biggest hurdles faced when using MABR, Kelly Gordon of Black & Veatch, spoke about the difficulty of predicting what the performance would be because “though we have some empirical models, there is not a good mechanistic model.” Bumkyu Kim of the University of Notre Dame, who has been operating MABRs in the lab and has been monitoring the effect of predation on bacteria, agreed, explaining that the gap between the model result and the experimental results was an issue he faced as well.

When asked about key advantages, Dwight Houweling of SUEZ Water Technologies & Solutions spoke about how MABR has improved upon two major limitations of biofilm by being able to maintain thin biofilm (allowing a high surface area to be maintained) and by addressing the oxygen limitation of conventional biofilm. Josep Manzano of OxyMem Ltd, agreed with Houweling, also added that another advantage of using MABR was it can handle more biomass per liter of volume than was previously possible. Ronen Shechter of Fluence echoed the others in his positive assessment of MABR, challenging anyone to “name another process that can quantitatively nitrify inside an oxic tank.” He emphatically concluded, “It [MABR] provides something that nothing else can do.”

The session “A Conversation on Digital Solutions for Collection Systems” included several experts discussing how utilities are using data management and artificial intelligence to monitor, optimize and control water and wastewater collection systems.

Session moderator Jennifer Steffens of Xylem posed the question that while using monitoring systems has become necessary in the past few months during the pandemic, what other catalysts prompted communities to adopt these tools before this time?

Corey Williams of Optimatics said: “It all comes back down to the money. We just can’t keep doing what we’ve been doing in the water community and call that sustainable because it’s not.”

Nicole Pasch, also of Xylem, said at a utility where she previously worked, the staff saw a lot of turnover and the utility wanted to create a transformative way of doing work.

“We didn’t have the staff members anymore and the 30 years of experience sitting there, so we had to get smart to succeed and to survive,” she said.

Steffens also asked that while many systems may have the capability of collecting data, how does that data get turned into information?

“When you run hundreds of thousands of simulations, there’s a lot of knowledge to be gained,” Williams said. “What pieces of infrastructure are never going to be relevant? What can I see that needs further study? If there isn’t a confidence about something, that’s a place to go study. We can limit the broadness of our studies and focus in on where we have real uncertainty. That’s where we can get something that is actionable.”

Pasch pointed out the importance of getting buy-in from the staff at a facility, to show them that the digitalized system is a true reflection of what’s going on in the system and includes what they know and what their instincts are.

Methods to predict, enhance and condition the biogas for proper use are important tools to further enhance the interest in biogas use. Experts during this session spoke on the methods their companies are using, and a moderator answered some questions from the audience.

When it comes to biogas production, Dr. Kaushik Venkiteshwaran from Marquette University referenced a study and it garnered the most discussion. The approach is taking microbes to use them as a predictive tool. Consider microbes as a broad block parameter, measuring water as solids and water as suspended solids, he said. Technology has changed and the understanding of microbes and biology has changed. The gene can be used to predict the activity these microbes have. Just using the microbial community, you can predict what the methane production is and then you try and incorporate it into an existing model.

Here were some interesting questions that were answered in the chat feature:

Q: How can we use the microbial community analysis to predict how operational changes (e.g., addition of fats, oils and grease (FOGs), change to thermophilic operation, addition of polymer to thickening, change in mixing system, addition of THP, etc.) will impact gas yield?

A: Our hypothesis is that any condition that affects biogas yield, will affect the underlying microbial community. Therefore, we can run experiments at varying conditions as you stated or conduct surveys of treatment plants undergoing these varying conditions, collect physio/chemical data and DNA data, we should be able to model it.

Q: There are new developments in commercial biological sensors (such as the SENTRY probes). Do you think that can be used as an approximate/alternative to the more complicated/expensive RNA/DNA testing?

A: It may be. Any method (probes or DNA) we use have to be studied extensively first. The data from the probe and digester performance will have to be correlated using large data set to develop the model and verified. But the more sensitive the analysis, the better resolution it can provide.

A: Microbial populations can be investigated/identified using DNA sequencing technologies. There are commercial laboratories that provide these services, including to municipalities. Additionally, microbial activity can be investigated using RNA or gene activity-based analysis. Other than RNA based techniques, microbial activity can also be investigated using wet-lab experiments such as Specific Methanogenic Activity Assay, which are performed in academic (at Marquette University) and commercial laboratories.

Q: How do you prevent the selected microbes from being outcompeted by existing microbes?

A: Generally, you will need to ensure that the targeted microbes are "seeded" into the digester or microbial ecosystem regularly. As a rule of thumb, any bioaugmented microbes should be re-seeded at least once every sludge age. So, in a well-mixed digester with a 20-day retention time, the selected microbes should be seeded at least once every 20 days. RNA/DNA studies can also let you know whether the selected microbes have become well established, in which case additional seeding might not be necessary.

Pumps
Food, Beverage & Tobacco Best-Performing Sector in August
The Jordan, Knauff & Company (JKC) Valve Stock Index down 17.3 percent over the last 12 months.
Pumps
Selecting the Right PD Pump for Food & Beverage Processing
Understand the principles of different rotary pumps before making a choice.
Pumps
Pumping Self Service Analytics for Greater Value
Real-time monitoring can alert users to issues and process failures.
Pumps
Sugar Processing: From Humble Sugar Beet to Favorite Ingredient
Having a reliable percentage of water and solids is useful for tracking sustainability.
Pumps
How the Food & Beverage Industry Is Reacting to COVID-19
Shift to automation, reliance on sanitation technology among changes for the future