Editor's Note: While running a pump at its best efficiency point saves money, reduces downtime and improves performance, many plant managers are unaware of how their equipment is actually performing. This series, which began in the July 2015 issue of Pumps & Systems (Read the first part of this series here), depicts a real-world scenario that is intended to illustrate the importance of monitoring pump efficiency.

Last month, the team at the Blue Creek municipal plant discussed the correct clearances between the wear rings of a pump (Read the third part of this series here). Based on a chart of recommended clearances, Sandy, a Duck Pump Company engineer, predicted the clearance for the 12.125-inch rings would be about 0.023 inches. Charlie, plant manager, was gathering the data to review the impact on the efficiency measurements that Bob from Duck Pump Company and plant maintenance supervisor Jim had looked at in July.

"OK, guys." Rusty, plant mechanic, pointed at the whiteboard of the conference room, where he, Charlie, Jim and storeroom manager Grady Cricket gathered to review the data and compare it with what Sandy told them last month. "I've got the measurements, and it's not 0.023 inches. I got nearly triple that. It's a huge clearance—almost seventy thousandths—and it's not a used rotor at all. This is a spare rotor we got at the storeroom. I don't know if it's similar to the one Bob tested in the field in July, but if so, we've got a problem!"

Charlie pulled out the chart that Sandy gave him at the last meeting. "Let's see… The article where this chart came from talks about a smaller pump, about 16-by-18 in size, while our unit is a lot bigger—30-by-36. But if we assume the results are roughly applicable, we would expect, according to the article, about a 4 percent efficiency degradation with ring clearances double the size. Our case is triple the size, so should we assume, say, about a 6 percent degradation or so? I'm not a hydraulics guru, but just trying to make some sense with these numbers. Would that be a reasonable ballpark guess?"

"I think that makes sense, Charlie," Jim said. "We can get a more accurate calculation from Sandy to verify, but for now, that is probably a close-enough estimate. So, as Bob told me in July, the pump he measured with his pumps reliability and energy savings monitoring (PREMS)-2A unit, gave him a performance drop of about 13.5 percent. According to the calculations, that led to about $125,000 per year wasted. If the real number is 6 percent, that would be roughly $60,000 in energy loss. In either case, we are wasting money because of flow recirculating through the incorrect clearance. Like you said, we still haven't determined if the pump Bob measured is similar to the spare rotor we just reviewed, but so far it looks to me like it has nothing to do with actual wear but with a mistake the Duck Pump company made with the brand-new clearances when they delivered the pump."

Charlie asked Jim to email the findings to Bob and Sandy.

"Let's also get Bob to come back and do his measurements on the other pumps as well. We've got five pumps at the main booster line and usually run only one or two—three at the most, depending on the demand—with the other units essentially installed spares. Which one did Bob measure with his PREMS-2A unit, Jim?" 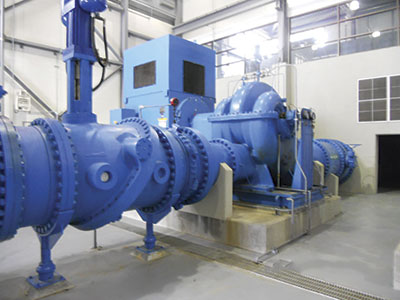 Efficiency monitoring is essential for troubleshooting pump operation problems and finding solutions. (Courtesy of the author)

"I'm not sure, Charlie. I think it was Unit 1, but I'll ask him that in my email as well. It's funny I didn't pay much interest to his testing proposal that day, but now that we discovered this issue, I'm glad I agreed. It's a good thing he did it."

As emails went back and forth, the team decided to PREMS-2A test the rest of the pumps, which Bob did the following week. Because the unit was portable, he was able to test all five units in one day, with the following results:

After the tests were completed, the group reconvened at the conference room to review Bob's gathered data.

"Well, Bob, we're glad you helped with the measurements—that's an impressive tool you have," Jim said. "But, it doesn't seem to point to any problems on our part. As I told you earlier, we are pumping clean water, so not much wear would have been expected. And now, from the rings examination, it looks like you guys shipped us some wrong rings. Good thing we didn't move forward with your $143,600 quote to repair!" Jim was upset that the Duck Pump Company caused them lost energy but at the same time was pleased the data was now clear, and he appreciated Bob's honesty and efforts to be as helpful as possible.

"I'm really sorry, folks, about the mix-up," Bob said, his hands rubbing his temples. "I have no idea why the rings were shipped oversized like that. I'll definitely find out from Sandy and our production folks, but I also must tell you why the numbers I got were more than the calculation we all did."

"Well, I didn't think about this myself initially—things kind of developed quickly—but once I had some more time to think, it occurred to me that what I actually measured was a combined efficiency of the entire unit: pump plus motor. But my comparison was against pump efficiency only as our factory test always shows."

"OK, Bob, can you break it down to us in some simple way without too much math?"

"Sure. The power I measured with the PREMS-2A was to the wires of the motor. The motor 'eats' some of the power, because of its own inefficiency. The nameplates of these motors show 94 percent efficiency, and our pumps are 88.8 percent."

Bob picked up a dry-erase marker and began jotting down calculations on the white board. "The resultant overall system efficiency is 0.888 x 0.94 = 0.83. That's 83 percent. My PREMS-2A unit measured 75.3 percent, so it is not as different as I originally thought (13.5 percent). As you can see, 83-75.3 = 7.7 percent, which is closer to the 6 percent efficiency that Jim calculated. That does not excuse the fact that we shipped you the wrong rings, but at least it's not as bad as we thought."

Charlie smiled. "I'm glad you liked my calculations, Bob! I never thought I would ever need to know all this stuff, but now that we did it, it was kind of fun. Besides, we'll give you a break—you are a good man and you tried hard to help us out. We appreciate that. Not sure how your production guys will explain the mixed-up rings, but that's OK. Come on—I'll buy you lunch."

A few days later, Sandy confirmed a mistake in production that resulted in shipment of the wrong rings. Duck Pump Company promised to replace the rings, free of charge, during the next overhaul. Ironically, she said, no one was able to come up with the theory why Pump 5 was operating even better than the factory test (given the adjustment for the motor efficiency as pointed out by Bob). That, she added, would remain a mystery.