This method of achieving variable speed pumping promotes energy efficiency and can pay for itself over a long period of service.
by Gary Patterson
09/15/2016

Worldwide, private and public enterprises are seeking to become more “green” in their operations, either by regulatory mandate or by conscientious choice. Concern over climate change is driving some energy users to find ways to reduce or eliminate emissions of greenhouse gases, most notably carbon dioxide (CO2).

While no single solution to this complex problem exists at this time, researchers are developing new technologies to produce more energy with fewer emissions. One major problem is that most of these ideas require significant investment and long-term development.

The world will continue to produce most of its energy by burning fossil fuels, resulting in continued emissions for the foreseeable future. But there are several changes companies can implement that will reduce their carbon footprint.

A published study of the worldwide wastewater treatment industry suggests that a significant dent can be made in reducing emissions. Facilities in this industry can reduce energy usage in the transportation and treatment processes by using existing technologies that are readily available.

Powering the Wastewater Renaissance, published online by Xylem Inc., reports that nearly 50 percent of all electrical usage in wastewater applications worldwide and 38 percent in the U.S. could be curtailed by implementing mature, accessible technologies. Even better news is that most of these improvements can be made at zero or negative cost. The reduction in electrical billing can offset initial expenditures over a few years, and the equipment continues to operate at a reduced cost for years beyond the initial payback.1

Overall energy usage, primarily electricity, can be expressed as an equivalent CO2 emission as million metric tons (Mt). Emissions vary according to the type of fuel used, with natural gas being cleaner than various grades of coal and fuel oil. A reasonable average working number is that one kilowatt-hour (kW-hr) of electrical power yields about 2 pounds of CO2.2

Among the most promising and easily implemented improvements cited in the study was the use of “optimal-speed” and “high-efficiency” pumping. By applying these improvements at all levels of the collection, treatment and discharge processes of the wastewater treatment industry, facilities can easily reduce energy usage.

In practical terms, this would mean incorporating variable speed pumping because optimal speed changes according to varying influent and weather conditions. 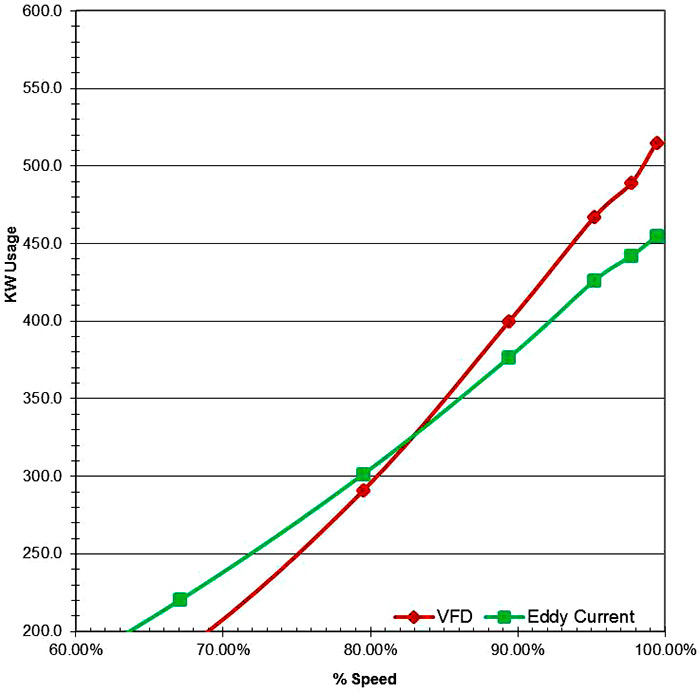 For a quick review, consider the affinity laws that apply to any centrifugal pump, fan or compressor: Flow is reduced in direct proportion to the rotating speed, while input power (expressed as brake horsepower or kilowatt-hours) is reduced by the cube of speed reduction.

In most centrifugal pump applications, the full spectrum of required flow can be produced over a relatively narrow speed range. In the example shown in Figure 2, the pump runs against a closed check valve until it develops sufficient pressure to overcome static head and push the valve open. It then runs from minimum flow at approximately 80 percent speed to full flow at 100 percent speed. 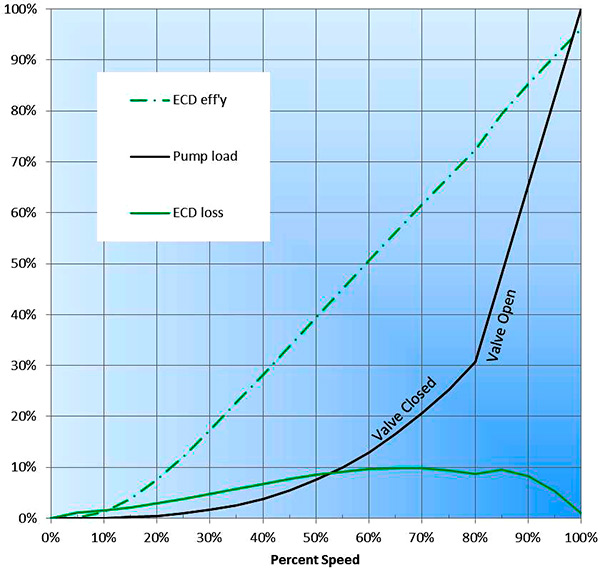 Implementing variable speed pumping can achieve significant savings in electrical usage. One comparison shows the annual cost of electricity for a 700-horsepower (hp) pump using a throttling valve to control flow to the cost of operating the same pump at an average speed of 90 percent to achieve the same flow rate. The motor and pump are assumed to be the same in each instance. A close examination of the data reveals the electromagnetic (eddy current) drive uses almost 706,000 fewer kilowatt-hours than the throttled full-speed pump and produces significantly less CO2 emissions. The user will see a $56,000 reduction in annual electric bill for this pump. In this way, these measures can be considered to be zero or negative cost (see Table 1).

At this average speed, an eddy current drive appears to be a better option than a VFD. The VFD produces the same speed reduction and resultant pump brake horsepower but nets more total losses, especially considering harmonic-related losses and the need for air conditioning. A VFD could also require higher costs to implement, especially if new construction is needed to house the equipment or if air conditioning is required to accommodate the VFD.

Experience suggests that some VFDs need replacement, on average, every seven to 12 years. Some eddy current drives could be in service for the full life of the pump and motor—often more than 40 years. End users seeking greener practices may want to consider the environmental impact of more frequent disposal of VFD equipment in addition to the expense of replacing the equipment two to four times over the full life of the pump or motor.

The benefits of variable speed pumping—including reduced power cost, reduced mechanical wear and process optimization—have long been recognized. In today’s economy characterized by increased environmental awareness, a significant reduction in a company’s carbon footprint can be added to the list of benefits. Electromagnetic drives are a viable way to achieve these results, and they can pay for themselves over a long period of service.

Gary Patterson has a BS in electrical engineering from Michigan Technological University, where he pursued the Power Option, specializing in rotating equipment and electrical power generation, transmission and distribution. He has many years of experience in the field and serves as the pump, fan, compressor technical specialist for Dynamatic, focusing on pumping and similar applications in the industrial and municipal markets.