Methane (CH4) is the second largest source of greenhouse gas emitted in the U.S. In 2013, CH4 accounted for about 10 percent of all U.S. greenhouse gas emissions from human activities. Methane's half-life in the atmosphere is much shorter than that of carbon dioxide (CO2); however, it is significantly more efficient at trapping radiation. Pound for pound, the comparative impact of CH4 on climate change is 25 times greater than that of CO2 during a 100-year period.

One area responsible for contributing to the increase in CH4 is leaking equipment in the oil and gas sector. A major contributor to this leakage is valves that leak CH4 and sub-derivatives called volatile organic compounds (VOC) from the gland.

During the last 30 years, governmental agencies have worked with industry leaders to address these leaks by increasing the implementation of new technology. This focus has prompted packing manufacturers to ramp up research and development of new materials. State and federal agencies have also tightened standards for maximum leak rate measurements of VOC values from 10,000 parts per million (ppm) 20 years ago to 100 ppm in most places in the U.S. today. As a comparison, that is like changing the Corporate Average Fuel Economy (CAFE) limits for miles per gallon (mpg) of automobiles from 1990 levels of 27.5 to 2,750 mpg.

One of the main challenges the industry needed to overcome was the lack of a unified testing standard. Twenty-five years ago, many refineries and packing manufacturers used their own testing standards with varying media (nitrogen, helium or methane at different concentrations), temperature ranges and thermal cycles. These variations made it difficult to compare the effectiveness of valve emission packing. A few standard organizations created tests for valve emissions addressing this issue.

The American Petroleum Institute (API) was one organization that specifically focused on a detailed testing procedure for packing performance in methane. The standard, API 622, has become a benchmark for packing performance in the U.S. for a variety of reasons, including the Environmental Protection Agency's (EPA) insistence that packing performance testing be conducted using methane instead of other gases. This standard became the catalyst for research and development efforts to create valve packing that could meet a less than 100 ppm requirement.

At the 2015 ISA Leak Detection and Repair (LDAR) Symposium, a paper by Buzz Harris from Sage Environmental focused on emission factors of leakage in refineries. His main focus was comparing testing data from API 622 to current common limits. He concluded that, in refining gas and vapor service, the emission factor would be reduced from 2.6 x 10-2 to 1.0 x 10-5 kg/hour/source—a decrease of more than a 1,000 times.

One important point is that API 622 is not a valve test but a packing test. It would be a mistake to assume that all valves will exhibit the same performance with the same packing. This is because all valves have their own unique design characteristics that affect overall sealing, primarily tolerances and unique valve design features. As a result, API created a testing protocol—API 624—that focused on emissions capability by valve design and valve manufacturer (see Image 1). 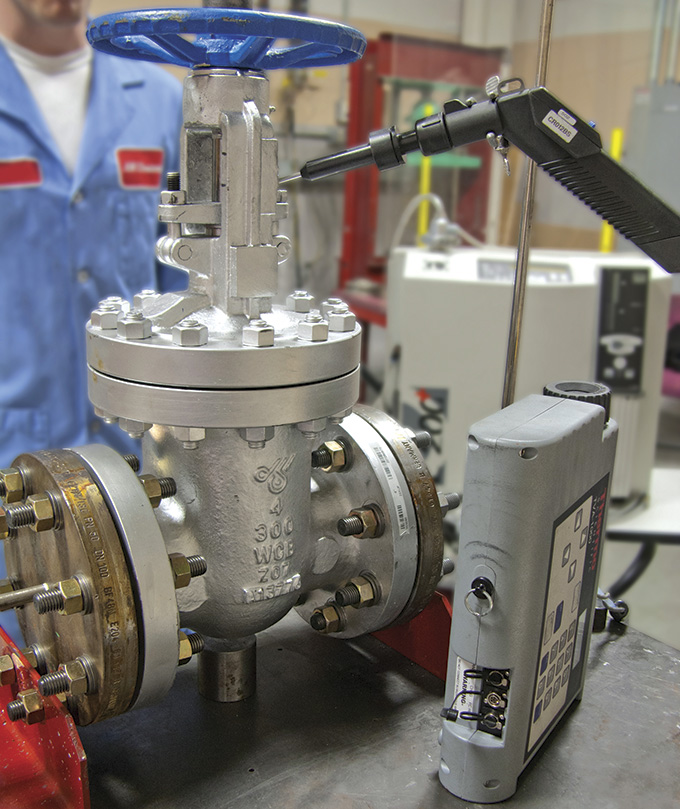 One other significant standard to note for valve testing is International Organization for Standardization (ISO) 15848.

Originally specifying helium as a test gas and mass flow rate as a measuring protocol, the standard was modified earlier this year to include testing with methane gas using a concentration measuring method.

API standards often complement each other and build on previous work. In the case of API 624, one of the prerequisites is that the packing used has already been tested to the API 622 standard. This is one reason the API 624 has fewer thermal cycles and stem actuations than API 622 (the 624 test procedure requires 310 mechanical cycles and three thermal cycles to 260 C [500 F]). API has also published design standards for other types of valves (API 600 and 602, for example). These standards are living documents that, as they are reviewed, will also reference the API 622 and API 624 standards for low-emission valves. This is significant in helping the petroleum industry reduce overall methane emissions.

Some of the lessons learned from API 624 have focused on the machining tolerances of components. Methane molecules are relatively small and leak rapidly through small gaps compared with steam and other media. This means that users should not use standard gland and valve dimensioning for steam service in emissions applications. The main areas of concern are stem and box size tolerance, the packing gland clearance to the stuffing box and stem, and the stem to the inside diameter of the bottom of the stuffing box clearance. All of these dimensions are critical to successful emissions sealing (see Figure 1). 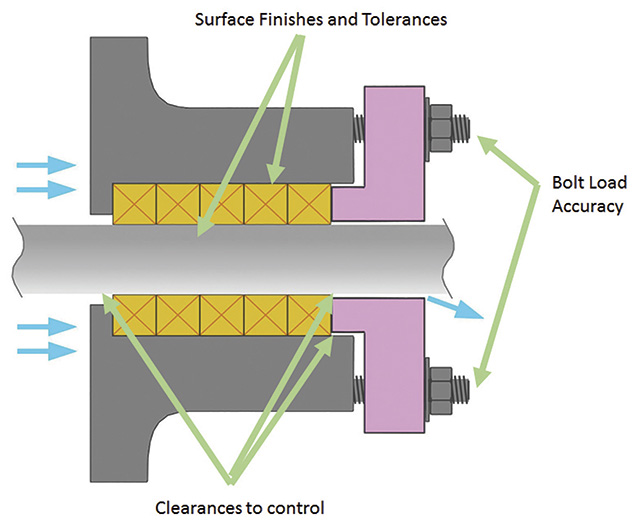 Another often overlooked area of concern that is critical for sealing methane is the bolting on the valve gland. One of the most important issues that testing confirmed is that the condition of the bolts can have a significant effect on the accuracy of the gland load on the packing. Lubrication is critical, and new bolts (as compared with used bolts) can drastically affect how the valve seals operate. Depending on the condition of the bolts, a user may not be getting the correct gland load. This is because, in most cases, the applied gland load is only assessed by torque, a measurement not of tension but of force over the threads and nut. When using unlubricated used bolts compared with new bolts, the same torque will result in a much lower tension and an under-loaded gland. One way to mitigate this problem is to use a load indicator, such as disc springs height, which measures specific tension on the connection.

The work the petroleum industry, regulatory agencies, packing manufacturers and the valve industry have completed has served to reduce methane emissions.

Next Month: Insulating Over Rubber Expansion Joints: A Good or Bad Idea?

Seals
Fugitive Emission Testing of Flange Gaskets
Examining the standards that guide gasket testing.
Valves
Ensure Safe Operation of Valves in High Pressure Applications
Understand how to maintain safety and reliability.
Seals
How to Contain Mixers & Agitators
Air seals prevent powder and slurry leakage in safety-focused and harsh industries.
Seals
Influence of Bearing & Seal Characteristics on Pump Vibrations
Understand the process of evaluating bearing and seal hydrodynamic and mechanical characteristics, as well as its modeling, in the frame of rotor dynamics analysis.
Valves
Spilling the Oil on Valve Quoting
A look at two-piece and three-piece ball valves and total cost of ownership.