Responsible for supplying an average of 60 million gallons of drinking water each day, the Monroe County Water Authority (MCWA) in Rochester, N.Y., depends on more than 100 centrifugal pumps with a total installed capacity of more than 35,000-hp. These pumps range in size from 5-hp to 1750-hp and consume an average 5-MW of power daily. In an era of conserving energy and increasing sustainability, the MCWA is attempting to reduce energy consumption, greenhouse gases and operations and maintenance costs.

The MCWA staff went into the field and physically measured each pump's performance (head, flow, kW and RPM) to develop a set of field pump curves for the water distribution model. They found that in virtually every pump tested, actual field pump curves were significantly below the manufacturers specified pump curve and field measured pump efficiencies were often 20 percent or more below the original manufacturer's stated pump efficiencies.

The MCWA team selected a few of the biggest offenders for refurbishment, targeting the units that operated at the least efficient rates. The MCWA assumed that overall performance decline was due to wear of internal components, so they overhauled them with the needed mechanical repairs, replacing rings, sleeves, seals, gaskets and bearings. When the pumps were returned to service, their performance improved, but many of the pumps were still running significantly below the manufacturer's specifications for head, flow and efficiency. Consequently, the MCWA began to consider other factors associated with the internal pump condition that might be causing declines in performance and efficiency.

During the teardown for mechanical repair, MCWA noticed extensive tuberculation buildup on the interior casings of all pumps. Tuberculation, the knob-like mound byproducts of corrosion that build up on the interior walls of pumps and unlined piping systems, has long challenged engineers and maintenance professionals in the water industry. For more than 50 years, the industry standard for pipeline manufacturers has been to apply a cement lining to the inside of cast and ductile iron pipe used in municipal water distribution systems to prevent corrosion and tuberculation buildup.

The MCWA team knew the effects on flow and head loss caused by corrosion, tuberculation and rough interior surfaces in old unlined cast iron pipelines installed before cement lining became the standard. They wondered if this roughness on just a few feet of pump casing between the suction and the discharge flanges really made a significant difference in a pump's performance and efficiency.

The MCWA team began a pilot study to refurbish several interior casings of the mechanically rebuilt pumps to see if reducing interior pump roughness would have any positive impact on pump performance and efficiency. Since only sandblasting the interior pump casings would allow corrosion and tuberculation to return quickly, the team began looking for acceptable coatings that could be applied after sandblasting to protect the interior surface from future corrosion and perhaps even enhance the reduction of head loss/hydraulic drag through the pump.

Due to their availability, ease of application and relative low cost, the MCWA team focused their coating search on NSF-approved brushable type ceramic-filled epoxy coatings. While the manufacturing and chemical industries have long embraced ceramic-filled epoxy coatings for abrasion and corrosion resistance in pumps, the MCWA team found little research to support that coatings improve or stabilize pump performance and energy efficiency. 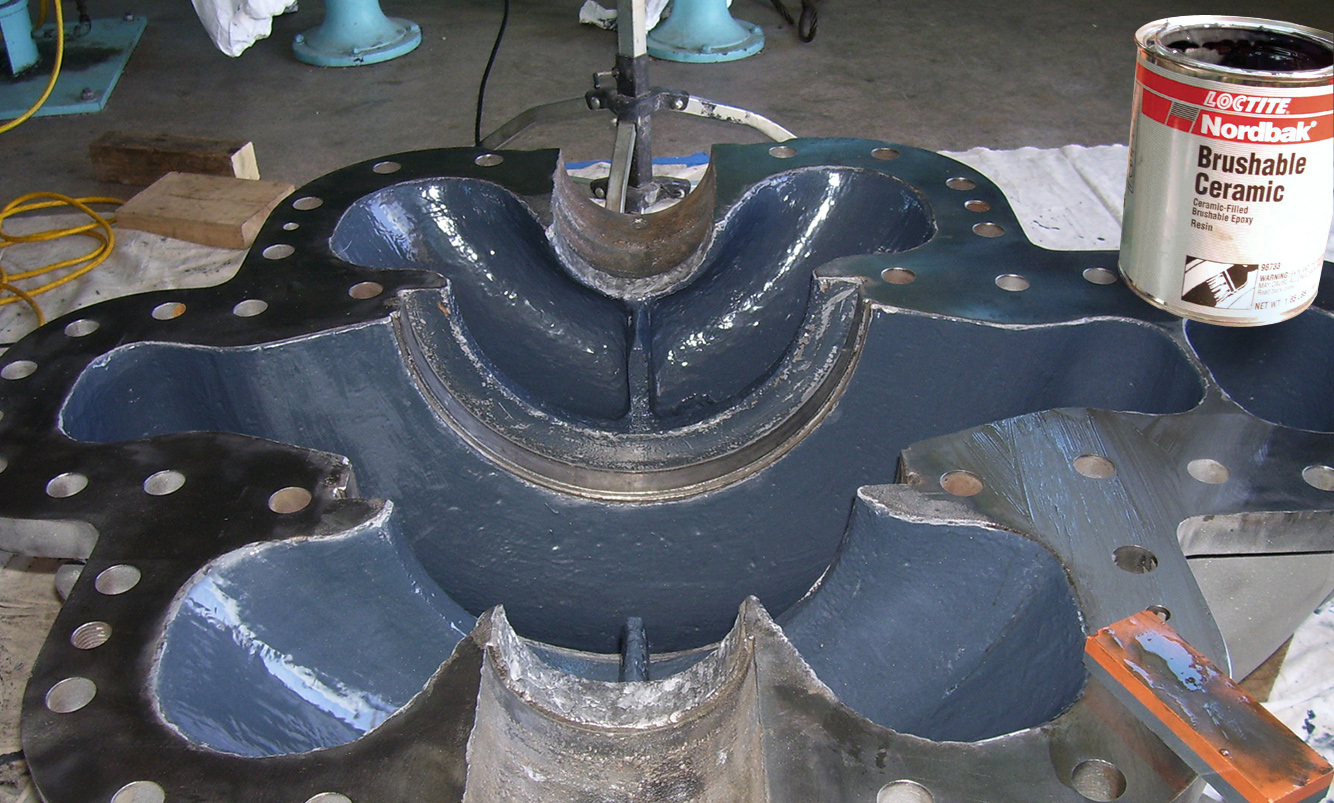 The results of the post coating field testing surprised even the most skeptical MCWA team members. In each of the three cases, pump efficiency increased by greater than 8 percent from the sandblasting and coating efforts, and overall performance of all three pumps was more or less restored to original manufacturer's pump curve specifications. Based on the results of the pilot study, the MCWA applied for and received a grant from the New York State Energy and Research Development Authority (NYSERDA) to conduct research on the use of ceramic epoxy coatings to increase pump performance and efficiency on a variety of pumps ranging in size from 20-hp to 1750-hp.

The ongoing study involves 18 of MCWA's centrifugal pumps. Six sets of three identical pumps were tested against each other. In every case, each pump was first either mechanically refurbished or sandblasted and coated. Next, the pumps were reassembled and field performance tested. The pumps were then disassembled a second time and either sandblasted/coated (if the first step was mechanical refurbishment) or mechanically refurbished (if the first step was sandblasting/coating) to measure the performance enhancement from the second step of the process.

This step allowed the performance-enhancing benefits of mechanical refurbishment and sandblasting/coating to be measured independently. The team could determine the individual contribution of each step to increased pump performance and efficiency and if it made any difference as to the work sequence performed.

Additionally, it was decided that three pumps would be sandblasted and left uncoated to develop a timeline showing how fast the corrosion and tuberculation would return to the point where pump performance began to decline. The pumps' performance would be field tested and studied for any performance degradation at 30, 60 and 90 days, then again at 6 months and every 6 months for 5 years thereafter.

As with the pilot study, the MCWA team decided to use NSF-approved brushable type ceramic epoxy coatings in the NYSERDA study. These coatings tout abrasion, corrosion, cavitation and even chemical resistance. The MCWA was also interested in coatings that were easy to apply, could be done in house at reasonable cost and would provide a smooth finish to reduce friction. Using brushable ceramic epoxy products, They quickly began rebuilding the first set of pumps.

As is often the case, dismantling the pumps proved to be the toughest work, including overcoming seized and/or rusted bolts and other typical maintenance challenges. As with the pilot case, the mechanical refurbishment consisted of replacing wear rings, bearings, shaft sleeves and impeller inspection and replacement if necessary. Pump casings were sent out for sandblasting, and as soon as a pump casing was picked up and returned to the shop, the coating process began (generally within 4 hours after completion of sandblasting).

The MCWA team started by filling in any deep pitted areas or gouges with a metal-filled epoxy and allowed that to cure before applying two 15-mil thick coats of brushable ceramic. Although inexperienced with these epoxy products, the team found them generally easy to apply, although it was initially difficult to be neat on the larger pumps. In addition to using short nap brushes and rollers designed for epoxy application, they also found inexpensive items such as household scrub brushes attached to broom handles ideal tools to reach into and apply the coating to the interior of the larger pumps, especially large double volute pumps.

After the first set of pumps were mechanically refurbished, sandblasted, coated and returned to service, the performance was measured, and the results surprised the team again. The data showed that compared to an OEM's specified pump curve, traditional mechanical refurbishment alone recovered only about half of a pump's total lost performance and efficiency. MCWA found that to fully return each pump to (or close to and in some cases in excess of) the original manufacturer specified pump curve required the additional step of sandblasting and coating the interior pump casings.

Energy analyses also revealed that mechanical refurbishment alone could only achieve about half of the total potential energy savings of a pump compared to what could be achieved if the pump was sandblasted and coated in addition to being mechanically refurbished. This is illustrated by the results for MCWA's Beahan No. 2 unit (see Figure 3) 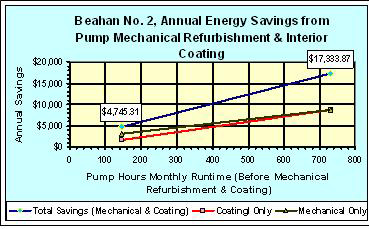 As with all pumps, total energy savings resulting from mechanical refurbishment and coating efforts are dependent on the total hours a pump operates. If the Beahan pump operated more or less continuously before any work was performed on it, the combined effect from mechanical refurbishment and interior coating on reduced energy use through increased performance and efficiency would result in more than $17,000 in annual energy savings (assuming energy costs of $0.085/kWh and $10.00/kW demand charge). Kilowatt hours (kWh) consumption would be reduced by approximately 82,000-kWh annually (the equivalent of the total annual greenhouse gas emissions of 11.8 passenger vehicles).

As shown in Figure 3, it was also calculated that half ($8,500) of the savings could be attributed specifically to sandblasting and coating-savings that would not have been achieved if the pump had only received the traditional mechanical refurbishment. The MCWA team estimates that if all of its 100+ pumps were mechanically refurbished, sandblasted and coated, the MCWA could realize energy cost savings in excess of several hundred thousand dollars from its $4 million annual energy budget.

More than a year into the study, the MCWA team has completed coating all 18 pumps for the NYSERDA study and is currently completing the field work portion of the study by finishing mechanical refurbishment on three pumps. The team continues to pull the pump covers to visually inspect coating integrity at regular intervals and has not observed any significant coating degradation. While the MCWA still has to finalize the NYSERDA study by submitting a research paper documenting their findings, the MCWA did not wait to complete it before incorporating ceramic coatings into their standard maintenance practices.

MCWA estimates that in many cases, depending upon the total hours a pump operates per year, it can achieve a complete payback via energy savings in less than a year through sandblasting and coating a pump's interior casing. Additionally, with the pumps running fewer hours through increased performance, the MCWA also expects to extend the life of both the pumps and motors.

Paul Maier, project manager of the NYSERDA study, states that "Pump sandblasting and coating should be a required step of any pump refurbishment program." MCWA has also included interior pump coatings as a requirement in its new pump specifications. The goal is that requiring coatings on the inside of new pumps will eliminate, or significantly delay, the seemingly inevitable decline in pump performance and efficiency from internal corrosion and tuberculation buildup inside unlined pumps.

As Maier says, "Given what we know about hydraulics in pipelines, no one in their right mind would consider purchasing unlined ductile iron pipe for use in a municipal water distribution system. Given what we have learned about flow through pumps from the pilot study and the NYSERDA study, perhaps it is time for pump manufacturers and pump users to consider the wisdom of manufacturing and/or purchasing unlined pumps as well."

Karen Verosky is the marketing manager, maintenance repair and operations for Henkel Corporation.