My past Pumps & Systems columns (read them here) have dealt with using basic engineering principles to better understand the interaction of pump, process and control elements in fluid piping systems. The articles demonstrate how to hone your troubleshooting skills while improving the operations of piping systems. This month, we will start demonstrating how to use this knowledge to work through problems on real-life systems.

I am not calling them case studies because case studies provide a system description, as well as information on the company, the plant facility, the problems encountered and maybe even the people involved. This degree of detail requires multiple levels of permission—even before the lawyers take a look at it.

Instead, I will use the line from the movies: "Based on an actual event." In this column, all the names and places have been omitted, but the other pertinent facts are presented. These columns are based on actual system problems I have encountered in my 45-year career in operating, designing, testing and supporting fluid piping systems. Many of the examples come from technical support questions from our software users and feedback from our piping system training classes.

In the late '90s, I was working with an electrical utility in British Columbia that had a program to help its large utility customers reduce their plants' energy consumption. The utility would evaluate a customer's pump systems to see what could be done to reduce energy consumption.

I got a call from the consultant performing the analysis on a water makeup system in a nickel mine, where water was pumped from a river to the mill through a 5-mile pipeline.

The utility's consultant modeled the river water system using a commercially available piping system simulation program. The river water level was 100 feet above sea level, and the elevation of the mine reservoir liquid level was 435 feet. The supply header was 12-inch steel schedule 40 pipe with a length of 21,000 feet from the river to the mill. The consultant built the system model and asked me if I would look at his results (see Figure 1).

The first thing I asked was if he had an accurate pump curve for the installed vertical turbine pumps. He did and provided me with a copy (see Figure 2). 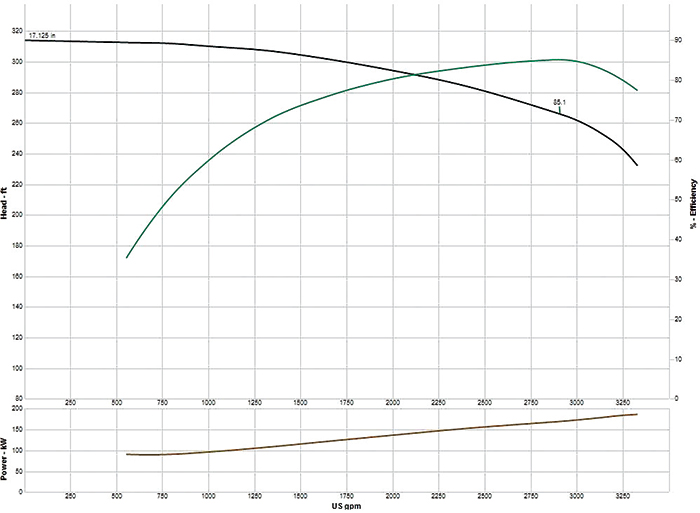 Figure 2. Pump curve for one of four identical 10-stage vertical turbines for the river water system

I then asked how the model's calculated results matched the physical system. He said the only system instrumentation was a pressure gauge on the pump discharge header reading 430 pounds per square inch (psi), which closely matched the simulation's calculated results. He also mentioned that he double-checked the river and tank elevations, pipe lengths and pipe diameters based on existing design documents, and they were correct.

The fact that he had a manufacturer's supplied pump curve and that the actual pump discharge pressure closely correlated with the calculated pump pressure indicated that the model closely resembled the physical system. With an accurate system model, proposed system changes could be evaluated.

Each of the four pumps were supplying 1,043 gpm, which is within the manufacturer's allowable operating range. But with the pump's best efficiency point (BEP) flow of 2,600 gpm, this represents only 40 percent of the pump's BEP flow—well outside the preferred operating range recommended in the American National Standards Institute/Hydraulic Institute (ANSI/HI) 9.6.3-2012 Rotodynamic (Centrifugal and Vertical) Pumps – Guideline for Allowable Operating Region standard. Running a pump this far from its BEP can cause premature bearing and seal failure.

Next, I looked at the flow rate through the supply header. With 4,200 gpm through the 12-inch diameter pipeline corresponding to a fluid velocity of 12 feet per second, the result was a dynamic head loss of 660 feet in the pipeline. This head loss added to the 335 feet of system static head results in a required pump head of 1,000 feet.

The flow rate in the river water system needed to be increased to 4,500 gpm. As previously stated, a fluid piping system is made of the pump, process and control elements. Increasing the flow rate to 4,500 gpm in the existing system resulted in a head loss in the supply header of 767 feet, or a total pump head of 1,102 feet. Each element affects the total system operation, and when users need to increase the system flow, their first thought is to call the pump manufacturer.

When the pump manufacturer was called, he stated that the existing pumps could not meet the head required for the new flow rate because the installed vertical turbine pumps were not designed for more than 10 stages. Additional pumps were not an option because there was no space in the pump house for the added pumps. As a result, the pump sales representative suggested replacing the existing pumps with higher-capacity pumps. The plant's utility manager was concerned the larger pumps would increase the site's electrical utility demand charges.

In this system, the process elements consist of the river, mine reservoir and the interconnecting piping complete with valves and fittings. Because the fluid velocity in the 12-inch supply header was so great, installing a new pipeline parallel to the existing pipe was considered. This would allow for a greater flow rate and minimize the head loss in the supply header.

The cost to operate the existing system with four pumps running 8,000 hours per year with a power cost of $0.03 a kilowatt/hour was approximately $358,000 per year. Installing a 20-inch pipeline in parallel to the existing supply header resulted in a head loss in the supply header of only 51 feet. As a result, the new pump head requirement was only 406 feet.

The cost to replace the five existing pumps with new, larger pumps to meet the increased system flow rate and head was in the same price range as adding the 20-inch pipeline. Because the addition of the pumps would do nothing to reduce the energy consumption of the existing system, the client decided to install the pipeline instead of considering pump replacements.

After the client had installed the pipeline in parallel, I called to see how the system changes had turned out. He sent me an as-built model of the system, and I noticed that the last 3,000 feet of the new pipeline was 24 inches in diameter. I asked if there was a reason for the larger pipe diameter in the new pipeline. He responded that they had purchased all the 20-inch pipe in Western Canada and wanted to get the improvement made as quickly as possible, so they purchased 24-inch diameter pipe for the remainder. In addition, the utility documented the $250,000 savings in energy cost.

As you can see, there are three elements in a fluid piping system. As they all work together, they have an effect on how the system operates. It is best to consider all options when looking at any piping system.