Flow-accelerated corrosion (FAC) has captured both research dollars and the attention of boiler cycle chemistry experts during the past decade and has become a primary concern for many plant operators. More than 60 percent of utilities have reported finding it in their facilities.

Defined as localized rapid metal loss that results in the thinning of carbon and low-alloy piping tube walls, FAC typically occurs in the mid-temperature regions of the boiler cycle, between 250 and 400 F. In high-pressure boiler cycles, these temperatures exist in boiler feedwater or low-pressure (LP) and intermediate-pressure (IP) sections of a heat recovery steam generator (HRSG). Aside from the obvious concerns posed by the catastrophic failure of feedwater piping, FAC is a significant safety concern. Unlike high-pressure boiler tube failures that occur inside a structure, FAC occurs in areas that are in close proximity to plant personnel. 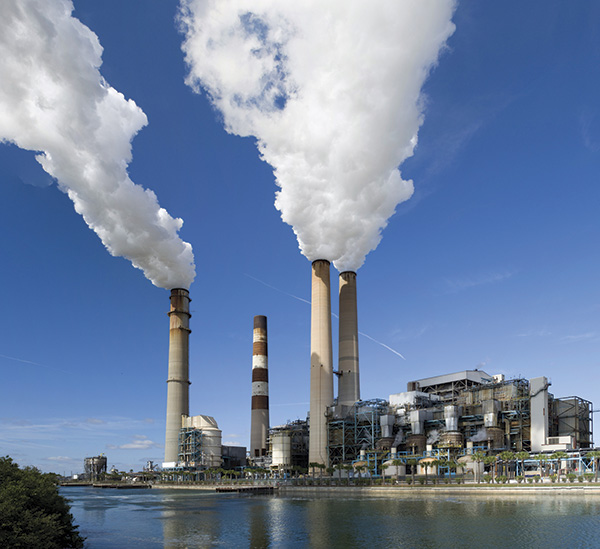 Termed “erosion-corrosion,” the first documented failure caused by FAC occurred in December 1986 at a nuclear power plant in Virginia. The tragedy resulted in four fatalities. The Electric Power Research Institute (EPRI) and Occupational Safety and Health Administration (OSHA) began documenting FAC cases and identifying the phenomenon’s root causes. In 1996, EPRI published the results of their investigation. That same year, OSHA issued a hazards bulletin on FAC. The culmination of these efforts led to a 2004 publication of guidelines for minimizing the risk of FAC. These documents, along with increased vigilance during inspections and attention to chemistry cycles, have led to a reduction in FAC-related failures.

FAC metal loss is best described as the absence of the protective iron oxide layer that limits corrosion in boiler systems. Without this protection, the surface is free to react with the passing water (or steam-air mixture called two-phase FAC), resulting in rapid metal loss. A classic sign of FAC is bare (shiny) metal with a scalloped appearance in the direction of flow (see Image 1).

Image 1. A classic sign of FAC is bare metal with a scalloped appearance.

Flow velocity, geometry, metallurgy, temperature, dissolved oxygen concentration and pH are all factors that affect FAC. Piping geometry and flow velocity go hand in hand. Failures are more likely to occur in areas of higher velocity—such as the outside of tube bends or where a tube intersects a header—than in adjacent areas, so periodic inspection of these areas in a boiler cycle is highly recommended. Many boiler service companies will perform these inspections and offer retrofit solutions through a change in piping geometry or a change of metallurgy in areas sensitive to higher chrome (greater than 0.1 percent alloys). To understand why iron oxides would not develop in these areas, researchers focused on the complex physics and chemistry of iron oxides.

Iron exists in two oxidation states (Fe+2 and Fe+3) and a variety of structures, so 16 known iron oxides and oxyhydroxides exist, each with different properties. Magnetite (Fe2O4) is formed in a boiler circuit under anaerobic conditions and is very stable, dense and uniform at high temperatures (greater than 400 F).

EPRI research has shown that alpha-structured ferric oxide, known as hematite (α-Fe2O2), can strengthen the porous magnetite layer and produce a more stable protective coating. Hematite is formed in oxidizing environments, so having some dissolved oxygen present in feedwater circuits (less than 10 parts per billion) is now considered beneficial. This has led many plants to abandon the use of chemical oxygen scavengers in all ferrous systems where continuously well-operated mechanical deaeration and minimal air inleakage are the norm. Iron oxide solubility is also dependent on pH, especially in the typical FAC temperature ranges as pictured at the bottom of the center column of Figure 1. 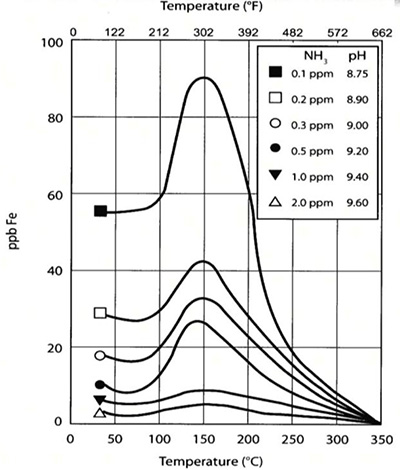 To aid in iron oxide formation, the historical feedwater pH control range of 8.8-9.2 has been elevated to 9.4-9.8 for all-ferrous systems and 9.2-9.6 for mixed-metallurgy (copper-based feedwater heater component) systems.
While the plant is online, the total level of iron in the feedwater is the best metric for FAC. Effective feedwater chemistry will yield total iron levels of less than 10 parts per billion. Since each plant is unique regarding operating regimes, system metallurgy, and environmental or steam host restrictions, plant managers should research specific recommendations for FAC prevention.

U.S. Water finds and eliminates the root cause of problems using an integrated approach that combines chemical, mechanical and operational knowledge to create a personalized approach to challenging water, energy and compliance issues. For more information about U.S. Water, visit uswaterservices.com or email info@uswaterservices.com.