The completion of the first well stimulation project in the Middle East for a North American-developed fluid pulse technology holds the potential to add new production options for operators throughout the MENA region.

The fluid pulse technology creates high inertial fluid momentum that improves the flow efficiency of the wellbore, near-wellbore region and reservoir and can increase oil production from existing fields by a factor of more than 200 percent. Developed in Alberta, Canada, fluid pulse technologies are now in use throughout North and South America, Latin America and more recently, the Middle East.

Inspiration for fluid pulse technology was developed through research into oil production following earthquakes. The researchers found generating a precisely controlled fluid pressure pulse allows the injected fluid to move outside the preferential flow path. The pressure pulses move fluid into and out of a larger number of pore networks, obtaining a more uniform injection front and resulting in increased oil production and recovery. 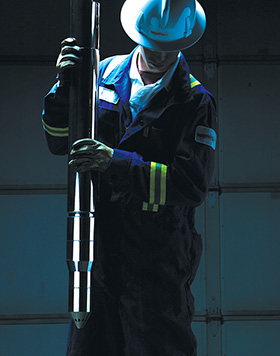 Waterflooding techniques have been used since the 1920s and ‘30s for secondary oil recovery. Fluid pulse technology increases efficiency in oil recovery operations in a range of applications, including well stimulations, enhanced oil recovery and precision drilling.

Additional downhole tool configurations transform the rate of injection into a pulsating injection stream of approximately 20 to 40 pulses per minute. Precise amounts of energy are repeatedly built up and released by the tool. The pulses add acceleration and momentum to the injected fluid, forcing it into the reservoirs’ nooks and crannies and more impermeable rock at speeds of up to 100 meters per second. This allows the injection fluid to enter pore spaces that have remained untouched over time. The result is a much better “sweep” of oil toward the surrounding producing wells.

A small independent operator in Alberta, Canada, implemented the technology in December 2010 with six tools in the relatively tight Viking formation. The sandstone involved in the mature waterflood had an average porosity of approximately 9 percent and permeability ranging from 0 to 50 millidarcies (mD). Production increased from the offset producers by 69 barrels of oil per day, or 52 percent above the base decline trend.

The fluid pulse technology was also installed in March 2010 at a dolomite formation in Crane County, Texas, U.S. The reservoir had approximately 15 percent porosity and permeability of 0 to 50 mD. Production from the area increased by about 30 percent compared with previous rates, and the underlying base decline decreased from 3.8 to about 1.5 percent per month.

An independent exploration and production company in Michigan implemented the fluid-pulse technology in a carbonate pinnacle reef field for approximately 17 months. The company’s intention was that the addition of fluid pulse technology would broaden carbon dioxide distribution through their existing well infrastructure. The extended distribution allowed for enhanced oil recovery. The carbon dioxide flood project included four wells, three producers—one of which was suspended—and one injector well.

The average oil cut after 17 months in Michigan increased to 97 percent compared with the previously established 82 percent. In January 2010, production rates had increased by 49 barrels of oil per day (bopd) with a base decline of 34 bopd to 83 bopd. The operator realized an overall increase in oil production of 144 percent, an 83 per cent reduction in decline and a 16 per cent increase in the oil cut.

The fluid pulse moves in and out of pore networks and creates a more uniform injection front. The technology can be paired with chemical enhanced recovery, liquid carbon dioxide injection, water injection, surfactant or polymer flooding, and other oil recovery methods.

For example, a pulsating jet tool developed for the technology can accommodate any fluid, gas or mixture. A vortex is formed inside the tool, which produces oscillating pulse energy. This energy produces sonic stress waves that have a far greater effectiveness compared with common jet nozzles. The pulsating jet tool cleans the wellbore and provides a shallow stimulation treatment into the near-reservoir region.

In coil tubing applications, the pulsating jet tool assists the extended reach capabilities of coil tubing by extending the coil’s horizontal creep—the “worming effect.” The tool can be manufactured into several port orientations to direct flow in both forward and reverse orientations. This ensures removed debris does not pile up and “stick” to the coil tubing.

A self-adjusting nozzle tool directs its jet stream energy from multiple ports to a single port and back. The adjustments are determined by what is encountered downhole. For example, if the nozzle tags hard scale or a scale plug/bridge, the tool will shut off its back and side ports to direct greater energy toward the tag. As the nozzle washes through the tag, the nozzle reverts back to its multiple-port configuration. The nozzle works well in horizontal wells because the back-facing ports wash fill as the work string (coiled tubing or tubing) is retracted.

Fluid pulse technology improves remedial fluid placement by propelling liquid deep into a reservoir. The pulses divert injected fluids away from flow paths. The wide range of fluid-pulsing tools can be deployed on tubing or coil tubing. Once placed at the desired depth, the tools only require a constant stream of treatment fluid to be effective. No diversion methods are needed: The tool will pulse the treatment fluid adjacent to where it is placed, improving zone coverage.

The effectiveness of fluid pulsing technology was tested against ultrasonic well stimulation methods. Each technology was run independently with acid displaced along a horizontal well. The well contained a fiber optic distributed temperature sensor, which provided the data necessary to trace the path of the stimulation fluids.

Sensor data showed that the ultrasonic tool did not improve the placement of acid, with most of the treatment channeling down a high permeability streak toward the toe of the well. Fluid pulsing and corresponding sensor data confirmed that the acid was placed throughout the horizontal interval with limited impact from the high permeability channel.

Brett Davidson is president and CEO of Wavefront Technology Solutions Inc., an Edmonton, Alberta-based leader in fluid injection optimization for improved performance and profitability in the oil and environmental sectors. He has more than 20 years of experience in research, development and commercialization of products and services in the civil, environmental and petroleum disciplines. Davidson is a founder of Wavefront and has spent the past 14 years guiding the company’s strategic direction, focusing extensively on the global commercialization of Wavefront’s fluid-pulse technology. He can be reached at brettd@onthewavefront.com.